Encyclopedia
Mark 7 "Thor
Thor
In Norse mythology, Thor is a hammer-wielding god associated with thunder, lightning, storms, oak trees, strength, the protection of mankind, and also hallowing, healing, and fertility...
" (or Mk-7') was the first tactical nuclear bomb adopted by US armed forces. It was also the first weapon to be delivered using the toss method
Toss bombing
Toss bombing is a method of bombing where the attacking aircraft pulls upwards when releasing its bomb load, giving the bomb additional time of flight by starting its ballistic path with an upward vector.The purpose of toss bombing is to compensate for the gravity drop of the...
with the help of the low-altitude bombing system (LABS). The weapon was tested in Operation Buster-Jangle
Operation Buster-Jangle
Operation Buster-Jangle was a series of seven nuclear weapons tests conducted by the United States in late 1951 at the Nevada Test Site. Buster-Jangle was the first joint test program between the DOD and Los Alamos National Laboratories. 6,500 troops were involved in the Desert Rock I, II, and III...
. To facilitate external carry by fighter bomber aircraft, Mark 7 was fitted with retractable stabilizer fins. Mark 7 was a dial-a-yield capsule-type weapon with fissionable elements (uranium 235) stored in a separate container. The Mark 7 warhead (W7) also formed the basis of the 30.5 inch (77.5 cm) BOAR rocket
BOAR (rocket)
The Bombardment Aircraft Rocket, also known as BOAR, the Bureau of Ordnance Aircraft Rocket, and officially as the 30.5-Inch Rocket, Mark 1, Mod 0, was an unguided air-to-surface rocket developed by the United States Navy's Naval Ordnance Test Station during the 1950s...
, the Mark 90 Betty
Mark 90 Betty nuclear bomb
The Mark 90 nuclear bomb, given the nickname "Betty", was a cold war nuclear depth charge, developed by the United States in 1952.It had a length of 10 ft 2 in, a diameter of 2 ft 7.5 in, and a weight of 1,243 lb, and it carried a Mark 7 nuclear warhead with a yield of 5-10 kilotons...
nuclear depth charge
Depth charge
A depth charge is an anti-submarine warfare weapon intended to destroy or cripple a target submarine by the shock of exploding near it. Most use explosives and a fuze set to go off at a preselected depth in the ocean. Depth charges can be dropped by either surface ships, patrol aircraft, or from...
, and MGR-1 Honest John
MGR-1 Honest John
The MGR-1 Honest John rocket was the first nuclear-capable surface-to-surface rocket in the US arsenal.The first nuclear-authorized guided missile was the MGM-5 Corporal. Designated Artillery Rocket XM31, the first such rocket was tested 29 June 1951 and the first production rounds were delivered...
rocket and MGM-5 Corporal
MGM-5 Corporal
The MGM-5 Corporal missile was the first guided weapon authorized by the United States to carry a nuclear warhead.The first nuclear-authorized unguided rocket was the MGR-1 Honest John...
ballistic missile
Ballistic missile
A ballistic missile is a missile that follows a sub-orbital ballistic flightpath with the objective of delivering one or more warheads to a predetermined target. The missile is only guided during the relatively brief initial powered phase of flight and its course is subsequently governed by the...
. It was also supplied for delivery by Royal Air Force
Royal Air Force
The Royal Air Force is the aerial warfare service branch of the British Armed Forces. Formed on 1 April 1918, it is the oldest independent air force in the world...
Canberra aircraft assigned to NATO in Germany
Germany
Germany , officially the Federal Republic of Germany , is a federal parliamentary republic in Europe. The country consists of 16 states while the capital and largest city is Berlin. Germany covers an area of 357,021 km2 and has a largely temperate seasonal climate...
under the command of SACEUR. This was done under the auspices of Project E
Project E
Project E was a joint project between the United States and the United Kingdom during the cold war to provide nuclear weapons to the British Royal Air Force prior to Britain's own nuclear weapons becoming available...
- an agreement between the USA and the UK on the RAF carriage of US nuclear weapons. The Mark 7 was in service from 1952 to 1968 with 1700-1800 having been built. 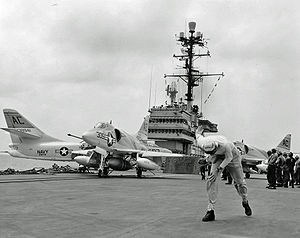