She busily worked on collecting rocks, feathers, shells, and the like for her museum, and made her desire to see unusual specimens known to fishermen. On December 22, 1938, she received a telephone call that such a fish had been brought in. She went to the docks to inspect the catch of Hendrik Goosen. "I picked away at the layers of slime to reveal the most beautiful fish I had ever seen," she said. "It was five foot[feet] long, a pale mauvy blue with faint flecks of whitish spots; it had an iridescent silver-blue-green sheen all over. It was covered in hard scales, and it had four limb-like fins and a strange puppy dog tail."

She hauled the fish to her museum in a taxi and tried to find the fish in her books without success. She was eager to preserve the fish and, having no facilities at the museum, took it to the morgue—which wouldn't have the thing. Courtenay-Latimer tried to contact James Smith, a friend who taught at Rhodes University
Rhodes University
Rhodes University is a public research university located in Grahamstown in the Eastern Cape Province of South Africa, established in 1904. It is the province’s oldest university, and is one of the four universities in the province...
, to help her identify it, but he was away. Courtenay-Latimer reluctantly sent it to a taxidermist to skin and gut it.

When Smith finally arrived on February 16, 1939, he instantly recognized the fish as a coelacanth
Coelacanth
Coelacanths are members of an order of fish that includes the oldest living lineage of Sarcopterygii known to date....
. "There was not a shadow of a doubt," he said. "It could have been one of those creatures of 200 million years ago come alive again." Smith would give it the scientific name Latimeria chalumnae after his friend and the Chalumna River
Chalumna River
The Chalumna River is a river in South Africa which empties into the Indian Ocean and is located about 45 km south west of the Buffalo River at East London. Kayser's Beach is situated close by....
, where it was found. It would be fourteen more years before another was brought in. 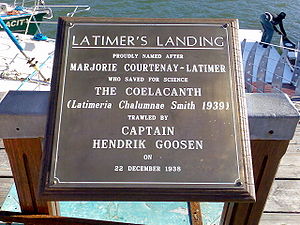 Courtenay-Latimer spent the rest of her career at the museum, retiring first to a farm at Tsitsikamma where she wrote a book on flowers and then back to East London. She never married and died in East London, aged ninety-seven.