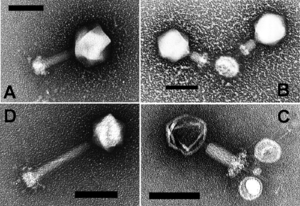 Marine bacteriophages or marine phages are virus
Virus
A virus is a small infectious agent that can replicate only inside the living cells of organisms. Viruses infect all types of organisms, from animals and plants to bacteria and archaea...
es that live as obligate
Obligate parasite
An obligate parasite is a parasitic organism that cannot complete its life cycle without dependence on its host.-See also:*Obligate intracellular parasite*Parasitism*Parasitic plant*Facultative parasite...
parasitic
Parasitism
Parasitism is a type of symbiotic relationship between organisms of different species where one organism, the parasite, benefits at the expense of the other, the host. Traditionally parasite referred to organisms with lifestages that needed more than one host . These are now called macroparasites...
agents in marine
Marine (ocean)
Marine is an umbrella term. As an adjective it is usually applicable to things relating to the sea or ocean, such as marine biology, marine ecology and marine geology...
bacteria
Bacteria
Bacteria are a large domain of prokaryotic microorganisms. Typically a few micrometres in length, bacteria have a wide range of shapes, ranging from spheres to rods and spirals...
such as cyanobacteria. Their existence was discovered through electron microscopy
Transmission electron microscopy
Transmission electron microscopy is a microscopy technique whereby a beam of electrons is transmitted through an ultra thin specimen, interacting with the specimen as it passes through...
and epifluorescence microscopy of ecological water samples, and later through metagenomic
Metagenomics
Metagenomics is the study of metagenomes, genetic material recovered directly from environmental samples. The broad field may also be referred to as environmental genomics, ecogenomics or community genomics. Traditional microbiology and microbial genome sequencing rely upon cultivated clonal cultures...
sampling of uncultured viral samples. The tailed bacteriophages
Caudovirales
The Caudovirales are an order of viruses also known as the tailed bacteriophages. Under the Baltimore classification scheme, the Caudovirales are group I viruses as they have double stranded DNA genomes, which can be anywhere from 18,000 base pairs to 500,000 base pairs in length...
appear to dominate marine ecosystems in number and diversity of organisms.

Bacteriophages, viruses that are parasitic on bacteria, were first discovered in the early twentieth century. Scientists today consider that their importance in ecosystems, particularly marine ecosystems, has been underestimated, leading to these infectious agents being poorly investigated and their numbers and species biodiversity being greatly under reported.

Marine phages, although microscopic and essentially unnoticed by scientists until recently, appear to be the most abundant and diverse form of DNA
DNA
Deoxyribonucleic acid is a nucleic acid that contains the genetic instructions used in the development and functioning of all known living organisms . The DNA segments that carry this genetic information are called genes, but other DNA sequences have structural purposes, or are involved in...
replicating agent on the planet. There are approximately 4x1030 phage in oceans or 5x107 per millilitre. They appear to influence biogeochemical cycles globally, provide and regulate microbial biodiversity
Biodiversity
Biodiversity is the degree of variation of life forms within a given ecosystem, biome, or an entire planet. Biodiversity is a measure of the health of ecosystems. Biodiversity is in part a function of climate. In terrestrial habitats, tropical regions are typically rich whereas polar regions...
, cycle carbon
Carbon cycle
The carbon cycle is the biogeochemical cycle by which carbon is exchanged among the biosphere, pedosphere, geosphere, hydrosphere, and atmosphere of the Earth...
through marine food webs
Food chain
A food web depicts feeding connections in an ecological community. Ecologists can broadly lump all life forms into one of two categories called trophic levels: 1) the autotrophs, and 2) the heterotrophs...
, and are essential in preventing bacterial population explosions
Overpopulation
Overpopulation is a condition where an organism's numbers exceed the carrying capacity of its habitat. The term often refers to the relationship between the human population and its environment, the Earth...
. Scientists are exploring the potential of marine cyanophage
Cyanophage
A cyanophage is a virus that infects cyanobacteria. The name is constructed from the term phage, for a virus that targets bacteria, and cyanobacteria for the specific type of bacteria this virus uses for replication...
s to be used to prevent or reverse eutrophication
Eutrophication
Eutrophication or more precisely hypertrophication, is the movement of a body of water′s trophic status in the direction of increasing plant biomass, by the addition of artificial or natural substances, such as nitrates and phosphates, through fertilizers or sewage, to an aquatic system...
.

Marine bacteriophage form an important part of deep sea
Deep sea
The deep sea, or deep layer, is the lowest layer in the ocean, existing below the thermocline and above the seabed, at a depth of 1000 fathoms or more. Little or no light penetrates this part of the ocean and most of the organisms that live there rely for subsistence on falling organic matter...
ecosystem
Ecosystem
An ecosystem is a biological environment consisting of all the organisms living in a particular area, as well as all the nonliving , physical components of the environment with which the organisms interact, such as air, soil, water and sunlight....
s. There are between 5x1012 and 1x1013 phage per square metre in deep sea sediments and their abundance closely correlates with the number of prokaryote
Prokaryote
The prokaryotes are a group of organisms that lack a cell nucleus , or any other membrane-bound organelles. The organisms that have a cell nucleus are called eukaryotes. Most prokaryotes are unicellular, but a few such as myxobacteria have multicellular stages in their life cycles...
s found in the sediments. They are responsible for the death of 80% of the prokaryotes found in the sediments, and almost all of these deaths are caused by cell lysis
Lysis
Lysis refers to the breaking down of a cell, often by viral, enzymic, or osmotic mechanisms that compromise its integrity. A fluid containing the contents of lysed cells is called a "lysate"....
(bursting). They therefore play an important part in shifting nutrients from living forms into dissolved organic matter and detritus. This explains the high rate of nutrient turnover in deep sea sediments. The release of nutrients from infected bacteria stimulates the growth of uninfected bacteria and then these also become infected. Because of the importance of deep sea sediments in biogeochemical cycles, marine bacteriophage must influence the carbon
Carbon cycle
The carbon cycle is the biogeochemical cycle by which carbon is exchanged among the biosphere, pedosphere, geosphere, hydrosphere, and atmosphere of the Earth...
, nitrogen
Nitrogen cycle
The nitrogen cycle is the process by which nitrogen is converted between its various chemical forms. This transformation can be carried out by both biological and non-biological processes. Important processes in the nitrogen cycle include fixation, mineralization, nitrification, and denitrification...
and phosphorus cycle
Phosphorus cycle
The phosphorus cycle is the biogeochemical cycle that describes the movement of phosphorus through the lithosphere, hydrosphere, and biosphere. Unlike many other biogeochemical cycles, the atmosphere does not play a significant role in the movement of phosphorus, because phosphorus and...
s, but the exact influences are currently not understood.

Marine viruses may play an important role in the carbon cycle by increasing the efficiency of the biological pump. The argument is that lysis releases unstable compounds, such as amino acids and nucleic acids, which tend to be recycled near the surface, whereas more indigestible carbon-rich material, such as that found in cell walls, is probably exported to deeper waters. Thus, the material that is exported to deeper waters by the 'viral shunt' is probably more carbon rich than the material from which it was derived. This would increase the efficiency of the biological pump.
The source of this article is wikipedia, the free encyclopedia.  The text of this article is licensed under the GFDL.