Encyclopedia
Marina di Ragusa is a village
Village
A village is a clustered human settlement or community, larger than a hamlet with the population ranging from a few hundred to a few thousand , Though often located in rural areas, the term urban village is also applied to certain urban neighbourhoods, such as the West Village in Manhattan, New...
in southern Italy, a frazione
Frazione
A frazione , in Italy, is the name given in administrative law to a type of territorial subdivision of a comune; for other administrative divisions, see municipio, circoscrizione, quartiere...
of the comune of Ragusa
Ragusa, Italy
Ragusa is a city and comune in southern Italy. It is the capital of the province of Ragusa, on the island of Sicily, with around 75,000 inhabitants. It is built on a wide limestone hill between two deep valleys, Cava San Leonardo and Cava Santa Domenica...
. The site is noted for its beautiful beaches and lively nightlife. Marina di Ragusa is located on the Mediterranean
Mediterranean Sea
The Mediterranean Sea is a sea connected to the Atlantic Ocean surrounded by the Mediterranean region and almost completely enclosed by land: on the north by Anatolia and Europe, on the south by North Africa, and on the east by the Levant...
coast of the island of Sicily
Sicily
Sicily is a region of Italy, and is the largest island in the Mediterranean Sea. Along with the surrounding minor islands, it constitutes an autonomous region of Italy, the Regione Autonoma Siciliana Sicily has a rich and unique culture, especially with regard to the arts, music, literature,...
, directly opposite the island of Malta
Malta
Malta , officially known as the Republic of Malta , is a Southern European country consisting of an archipelago situated in the centre of the Mediterranean, south of Sicily, east of Tunisia and north of Libya, with Gibraltar to the west and Alexandria to the east.Malta covers just over in...
. The village has an official population of 4,070 but during the summer it gets to over 60,000 inhabitants. 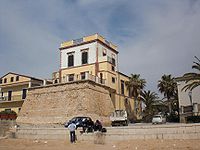 The local economy is based on tourism. Many bars, restaurants and hotels are busy during the summer season whilst during the winter the village gets busy only at weekends. Nightclubs and camping can also be found. The local fishing industry has nearly disappeared and has been replaced by intensive agriculture in greenhouse
Greenhouse
A greenhouse is a building in which plants are grown. These structures range in size from small sheds to very large buildings...
s that can be found along this stretch of coast. From the nearby Market of Vittoria green-products get exported to all Europe
Europe
Europe is, by convention, one of the world's seven continents. Comprising the westernmost peninsula of Eurasia, Europe is generally 'divided' from Asia to its east by the watershed divides of the Ural and Caucasus Mountains, the Ural River, the Caspian and Black Seas, and the waterways connecting...
.

The new port of Marina di Ragusa was designed in the 1980s but after a short time works stopped until the years 2006-2008, when with European Funding it was possible to complete it. The new port aims to became one of the major tourist ports of the island. The new structure is the biggest tourist port of Sicily and can moor over 800 boats and the new offices for the Coast Guard
Coast guard
A coast guard or coastguard is a national organization responsible for various services at sea. However the term implies widely different responsibilities in different countries, from being a heavily armed military force with customs and security duties to being a volunteer organization tasked with...
. , there are also plans for a shopping centre and ferry service to Malta. It was officially opened the 3rd of July 2009.