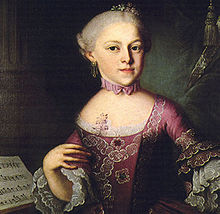 Maria Anna (Marianne) Mozart was born in Salzburg
Salzburg
-Population development:In 1935, the population significantly increased when Salzburg absorbed adjacent municipalities. After World War II, numerous refugees found a new home in the city. New residential space was created for American soldiers of the postwar Occupation, and could be used for...
. When she was seven years old, her father Leopold Mozart
Leopold Mozart
Johann Georg Leopold Mozart was a German composer, conductor, teacher, and violinist. Mozart is best known today as the father and teacher of Wolfgang Amadeus Mozart, and for his violin textbook Versuch einer gründlichen Violinschule.-Childhood and student years:He was born in Augsburg, son of...
started teaching her to play the harpsichord
Harpsichord
A harpsichord is a musical instrument played by means of a keyboard. It produces sound by plucking a string when a key is pressed.In the narrow sense, "harpsichord" designates only the large wing-shaped instruments in which the strings are perpendicular to the keyboard...
. Leopold took her and Wolfgang on tours of many cities
Mozart family grand tour
The Mozart family grand tour was a journey through western Europe, undertaken by Leopold Mozart, his wife Anna Maria, and their musically gifted children Maria Anna and Wolfgang Amadeus from 1763 to 1766. At the start of the tour the children were aged eleven and seven respectively...
, such as Vienna and Paris, to showcase their talents. In the early days she sometimes received top billing and she was noted as an excellent harpsichord player and fortepianist
Fortepiano
Fortepiano designates the early version of the piano, from its invention by the Italian instrument maker Bartolomeo Cristofori around 1700 up to the early 19th century. It was the instrument for which Haydn, Mozart, and the early Beethoven wrote their piano music...
.

However, given the views of her parents, prevalent in her society at the time, it became impossible as she grew older for Marianne to continue her career any further. According to New Grove, "from 1769 onwards she was no longer permitted to show her artistic talent on travels with her brother, as she had reached a marriageable age." Wolfgang went on during the 1770s to many artistic triumphs while traveling in Italy with Leopold, but Marianne had to stay home in Salzburg with her mother. She likewise stayed home with Leopold when Wolfgang visited Paris and other cities (1777–1779) accompanied by his mother.

There is evidence that Marianne wrote musical compositions, as there are letters from Wolfgang praising her work, but the voluminous correspondence of father Leopold never mentions any of her compositions, and none have survived. 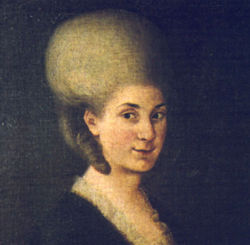 In contrast to her brother, who quarreled with their father and eventually disobeyed his wishes with respect to career path and choice of spouse, Marianne remained entirely subservient to her father's wishes. She fell in love with Franz d'Ippold, who was a captain and private tutor, but was forced by her father to turn down his marriage proposal. Wolfgang attempted, in vain, to get Marianne to stand up for her own preference.

Eventually Marianne married a wealthy magistrate, Johann Baptist Franz von Berchtold zu Sonnenburg (23 August, 1783), and settled with him in St. Gilgen
St. Gilgen
Sankt Gilgen is a picturesque village by the Wolfgangsee in the Austrian state of Salzburg, in the "Salzkammergut" region.-History:In the year 1376 Sankt Gilgen was first mentioned in documents. 1873 the shipping on the Wolfgangsee started and so did the tourism too. Also the construction of the...
, a village in Austria about 29 km east of the Mozart family home in Salzburg. Berchtold was twice a widower and had five children from his two previous marriages, whom Marianne helped raise. She also bore three children of her own: Leopold Alois Pantaleon (1785–1840), Jeanette (1789–1805) and Maria Babette (1790–1791).


Leopold's raising of her son

An unusual episode in Marianne's life occurred when she gave birth (27 July 1785) to her first child, a son who was named Leopold after his grandfather. Marianne had traveled from her home in St. Gilgen to Salzburg for the birth. When she returned to St. Gilgen, she left her infant in the care of her father and his servants. The elder Leopold stated (by a letter that preceded Marianne back to St. Gilgen) that he would prefer to raise the child for the first few months himself. In 1786 he extended the arrangement to an indefinite term. Leopold continued to care for his grandson, taking delight in his progress (toilet training, speech, and so on), and commencing with the very beginnings of musical training. Marianne saw her son on occasional visits, but in general was not involved in his care. The arrangement continued until the death of her father, on 28 May 1787.

Biographers differ on what was the basis for this arrangement. Little Leopold was ill in his infancy, and perhaps needed to be kept in Salzburg for this reason, but this does not explain why he was still kept there after his recovery. Another possibility attributes the arrangement to Marianne's delicate health or her need to take care of her stepchildren. Biographer Maynard Solomon
Maynard Solomon
Maynard Solomon has carried out a multiple career: he was a co-founder of Vanguard Records as well as a music producer, and later became a writer on music.-Career in the recording industry:...
attributes the arrangement to Leopold's wish to revive his skills in training a musical genius, as he had done with Wolfgang. He also suggests that the giving up her son was indicative of Marianne's total subordination to her father's wishes.

When Mozart was a toddler, Nannerl was his idol. Maynard Solomon writes, "at three, Mozart was inspired to study music by observing his father's instruction of Marianne; he wanted to be like her." The two children were very close, and they invented a secret language and an imaginary "Kingdom of Back" of which they were king and queen. Mozart's early correspondence with Marianne is affectionate, and includes some of the scatological
Mozart and scatology
Wolfgang Amadeus Mozart displayed scatological humor in his letters and a few recreational compositions. This material has long been a puzzle for Mozart scholarship...
and sexual word play in which Mozart indulged with intimates. Occasionally Wolfgang wrote entries in Marianne's diary, referring to himself in the third person.

Wolfgang wrote a number of works for Marianne to perform, including the Prelude and Fugue in C, K. 394 (1782). Until 1785 he sent her copies of his piano concertos (up to No. 21
Piano Concerto No. 21 (Mozart)
The Piano Concerto No. 21 in C major, K. 467, was completed on March 9, 1785 by Wolfgang Amadeus Mozart, four weeks after the completion of the previous D minor concerto.- Structure :There are three movements....
) in St. Gilgen.

Concerning the relationship between Wolfgang and Marianne in adulthood, authorities differ. According to New Grove, Wolfgang "remained closely attached to her." In contrast, Maynard Solomon contends that in later life Wolfgang and Marianne drifted apart completely. He notes, for instance, that after Mozart's unhappy visit to Salzburg in 1783, Wolfgang and Marianne never visited each other again, that they never saw each other's children, and that their correspondence diminished to a trickle, ceasing entirely in 1788.

Herr Prof. Niemetschek's biography so completely reanimated my sisterly feelings toward my so ardently beloved brother that I was often dissolved in tears, since it is only now that I became acquainted with the sad condition in which my brother found himself.

Marianne's husband died in 1801. She returned to Salzburg, accompanied by her two living children and four stepchildren, and worked as a music teacher.

In her old age, Marianne had her first encounter in person with Mozart's widow Constanze
Constanze Mozart
Constanze Mozart was the wife of Wolfgang Amadeus Mozart.-Early years:Constanze Weber was born in Zell im Wiesental. Her mother was Cäcilia Weber, née Stamm. Her father Fridolin Weber worked as a "double bass player, prompter and music copyist." Fridolin's half-brother was the father of composer...
since the unhappy visit of 1783. In 1820, Constanze and her second husband Georg Nikolaus von Nissen
Georg Nikolaus von Nissen
Georg Nikolaus von Nissen was a Danish diplomat and music historian...
moved to Salzburg. Although Marianne had not even known that Constanze was still alive, the encounter was apparently "cordial" though not warm. Eventually Marianne did the Nissens a great favor: for purposes of the biography of Mozart they were writing, she let them have her collection of Mozart family letters, including Wolfgang and Leopold's correspondence up to 1781.

In 1821 Marianne enjoyed a visit from Wolfgang's son Franz Xaver Mozart, whom she had never met during her brother's lifetime. The son had come from his home in Lemberg
Lviv
Lviv is a city in western Ukraine. The city is regarded as one of the main cultural centres of today's Ukraine and historically has also been a major Polish and Jewish cultural center, as Poles and Jews were the two main ethnicities of the city until the outbreak of World War II and the following...
to conduct a performance of his father's Requiem
Requiem (Mozart)
The Requiem Mass in D minor by Wolfgang Amadeus Mozart was composed in Vienna in 1791 and left unfinished at the composer's death. A completion by Franz Xaver Süssmayr was delivered to Count Franz von Walsegg, who had anonymously commissioned the piece for a requiem Mass to commemorate the...
in remembrance of the recently-deceased Nissen.

In her last years Marianne's health declined, and she became blind in 1825. Mary Novello, visiting in 1829, recorded her impression that Mrs. Berchtold was "blind, languid, exhausted, feeble and nearly speechless," as well as lonely. She mistakenly took Marianne to be impoverished, though in fact she left a large estate (7837 gulden).

Marianne died on 29 October 1829, and was buried in St Peter's Cemetery, Salzburg.


As a fictional character

Many authors have created fictional characters based on Maria Anna Mozart.