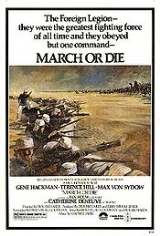 Encyclopedia
March or Die is a 1977
1977 in film
The year 1977 in film involved some significant events.-Events:*In the Academy Awards, Peter Finch, Faye Dunaway and Beatrice Straight win Best Actor and Actress and Supporting Actress awards for Network....
film directed by Dick Richards
Dick Richards
Dick Richards is an American film director, producer and writer.After working as a photographer, Richards went on to direct commercials. His career in film began by writing and directing a western, The Culpepper Cattle Co. , and continued with such films as Farewell, My Lovely , March or Die , and...
, starring Gene Hackman
Gene Hackman
Eugene Allen "Gene" Hackman is an American actor and novelist.Nominated for five Academy Awards, winning two, Hackman has also won three Golden Globes and two BAFTAs in a career that spanned five decades. He first came to fame in 1967 with his performance as Buck Barrow in Bonnie and Clyde...
, Terence Hill
Terence Hill
Terence Hill is an Italian actor. He is best known for starring in multiple action and western films together with his longtime filmpartner Bud Spencer.-Biography:...
, Catherine Deneuve
Catherine Deneuve
Catherine Deneuve is a French actress. She gained recognition for her portrayal of aloof and mysterious beauties in films such as Repulsion and Belle de jour . Deneuve was nominated for an Academy Award for Best Actress in 1993 for her performance in Indochine; she also won César Awards for that...
and Ian Holm
Ian Holm
Sir Ian Holm, CBE is an English actor known for his stage work and for many film roles. He received the 1967 Tony Award for Best Featured Actor for his performance as Lenny in The Homecoming and the 1998 Laurence Olivier Award for Best Actor for his performance in the title role of King Lear...
.

The film celebrates the 1920s French Foreign Legion
French Foreign Legion
The French Foreign Legion is a unique military service wing of the French Army established in 1831. The foreign legion was exclusively created for foreign nationals willing to serve in the French Armed Forces...
. Foreign Legion Major Foster (Hackman), a war-weary American haunted by his memories of the recently-ended Great War, is assigned to protect a group of archaeologists at a dig site in Erfoud in Morocco
Morocco
Morocco , officially the Kingdom of Morocco , is a country located in North Africa. It has a population of more than 32 million and an area of 710,850 km², and also primarily administers the disputed region of the Western Sahara...
from Bedouin revolutionaries led by El-Kirm (based on Moroccan revolutionary Abd el-Krim).

Soon after the Great War
World War I
World War I , which was predominantly called the World War or the Great War from its occurrence until 1939, and the First World War or World War I thereafter, was a major war centred in Europe that began on 28 July 1914 and lasted until 11 November 1918...
, Major Foster (Hackman), the commander of a detachment of the French Foreign Legion, suffers the haunting memories of leading an army of 8,000, now reduced to 200. He became an alcoholic as a result, and his only friend is his faithful Sergeant, Triand (Rufus Narcy).

Foster arrives in Paris to assume a new command: to return to the Rif
Rif
The Rif or Riff is a mainly mountainous region of northern Morocco, with some fertile plains, stretching from Cape Spartel and Tangier in the west to Ras Kebdana and the Melwiyya River in the east, and from the Mediterranean Sea in the north to the river of Wergha in the south.It is part of the...
(Morocco) to re-establish French authority, as Bedouin and Berber
Berber people
Berbers are the indigenous peoples of North Africa west of the Nile Valley. They are continuously distributed from the Atlantic to the Siwa oasis, in Egypt, and from the Mediterranean to the Niger River. Historically they spoke the Berber language or varieties of it, which together form a branch...
tribes have begun to revolt against French rule. Foster is also ordered to escort archeologists from the Louvre
Louvre
The Musée du Louvre – in English, the Louvre Museum or simply the Louvre – is one of the world's largest museums, the most visited art museum in the world and a historic monument. A central landmark of Paris, it is located on the Right Bank of the Seine in the 1st arrondissement...
, who are uncovering an ancient city near Erfoud
Erfoud
Erfoud is an oasis town in the Sahara Desert, in in the Meknès-Tafilalet of the Maghreb region in eastern Morocco. It is located at .Erfoud is divided into several districts: Hay Salam, Hay Jdid, Hay Ziz, Hay el Bathaa, Hay Annahda, Hay el Hamri....
buried by a sand storm 3,000 years ago. The site is the final resting place of a Berber saint, "The Angel of the Desert". Foster was chosen for the assignment, as he is the only French officer alive who served in Morocco before the war. He had helped to develop diplomatic ties with the tribes, especially with El Krim, the de facto leader of the scattered Rif tribes. Foster had vowed to El Krim that there would be no further archeological excavations.

Foster’s force is assembled. Among those who volunteer, willingly or unwillingly, is "the Gypsy" Marco Segrain (Terence Hill), a charming jewel thief famous for a three-year crime spree on the Riviera until French authorities managed to apprehend him. Gypsy befriends three other recruits: the Russian giant Ivan (Jack O'Halloran), formerly a member of the elite bodyguard of the deposed Russian Imperial
Romanov
The House of Romanov was the second and last imperial dynasty to rule over Russia, reigning from 1613 until the February Revolution abolished the crown in 1917...
family; “Top Hat” Gilbert Francis (André Penvern), a fashionable man and musician who lacks the physical traits needed in a soldier; and Fredrick Hastings (Paul Sherman), a romantic young English aristocrat who missed the Great War.

The four friends are soon disillusioned by the harsh realities of life in the Legion. A fatal fight breaks out among the men while traveling to Morocco over a homophobic insult to Maj. Foster's honor, to which Sgt. Triand takes exception. Foster does not hesitate to harshly discipline his men, especially Marco, who frequently disobeys orders, though he does care for his men. During the voyage, Marco charms Mme. Picard (Catherine Deneuve), daughter of a murdered archaeologist.

During their land journey to the Legion fortress, the train carrying the Legionnaires and the archaeological team is stopped by El Krim (Ian Holm) and his men. El Krim greets his old friend Foster but also declares that he is determined to unite the Berber tribes to drive the French out of Morocco. El Krim gives a "gift" to Foster to take back to the Premier of France: the archeologists of an earlier dig, who have been blinded and whose tongues have been cut out. He warns Foster not continue the excavation.

Training in the desert is so harsh, it pushes Top Hat to the point of suicide. Later, at the digging site, Hastings is kidnapped while on guard duty and tortured to death by one of El Krim’s men, whom El Krim excuses as being merely over-zealous. Marco retaliates. Instead of disciplining him, Foster merely defends him, using El Krim’s previous excuse for the actions of his own man.

Eventually, the tomb of the Angel of the Desert is found, and her golden sarcophagus is excavated. Foster offers it to El Krim as a token of peace, but El Krim rallies the warriors of all Bedouin tribes to fight a climactic battle. With the Legionnaires being heavily outnumbered, the digging site is eventually over-run. Ivan is killed, but Marco fights on, single-handedly fending off a flank attack. When Foster is killed, El Krim immediately calls off the fight, sending the surviving Legionnaires “to tell the world what happened” and out of respect for his dead friend.

There are two endings: the TV version ends with Marco taking up Mme Picard's offer to desert. The theatrical ending shows Marco (after having been promoted for his bravery in battle) staying behind and training more Legionnaire recruits, welcoming them by reiterating Foster's warning: "If the desert doesn't get you, the Arabs will. If the Arabs don't get you, the Legion will. And if the Legion doesn't, then I will. I don't know which is worse."