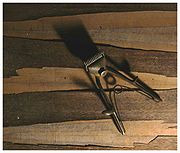 Hair clippers are specialized implements used to cut human
Human
Humans are the only living species in the Homo genus...
head hair. They work on the same principle as scissors, but are distinct from scissors themselves and razor
Razor
A razor is a bladed tool primarily used in the removal of unwanted body hair through the act of shaving. Kinds of razors include straight razors, disposable razors and electric razors....
s. Similar but heavier-duty implements are used to shear sheep
Sheep shearing
Sheep shearing, shearing or clipping is the process by which the woollen fleece of a sheep is cut off. The person who removes the sheep's wool is called a shearer. Typically each adult sheep is shorn once each year...
, but are called handpieces or machine shears.

Hair clippers comprise a pair of sharpened
Sharpening
Sharpening is the process of creating or refining a sharp edge of appropriate shape on a tool or implement designed for cutting. Sharpening is done by grinding away material on the implement with an abrasive substance harder than the material of the implement, followed sometimes by processes to...
comb
Comb
A comb is a toothed device used in hair care for straightening and cleaning hair or other fibres. Combs are among the oldest tools found by archaeologists...
-like blades in close contact one above the other which slide sideways relative to each other, a mechanism
Mechanism
Mechanism may refer to:*Mechanism , rigid bodies connected by joints in order to accomplish a desired force and/or motion transmission*Mechanism , explaining how a feature is created...
which may be manual or electrical to make the blades oscillate
Oscillation
Oscillation is the repetitive variation, typically in time, of some measure about a central value or between two or more different states. Familiar examples include a swinging pendulum and AC power. The term vibration is sometimes used more narrowly to mean a mechanical oscillation but sometimes...
from side to side, and a handle. The clipper is moved so that hair is positioned between the teeth of the comb, and cut with a scissor action when one blade slides sideways relative to the other. Friction
Friction
Friction is the force resisting the relative motion of solid surfaces, fluid layers, and/or material elements sliding against each other. There are several types of friction:...
between the blades needs to be as low as possible, which is attained by choice of material and finish, and frequent lubrication
Lubrication
Lubrication is the process, or technique employed to reduce wear of one or both surfaces in close proximity, and moving relative to each another, by interposing a substance called lubricant between the surfaces to carry or to help carry the load between the opposing surfaces. The interposed...
.

Hair clippers are operated by a pair of handles which are alternately squeezed together and released.

Barber
Barber
A barber is someone whose occupation is to cut any type of hair, and to shave or trim the beards of men. The place of work of a barber is generally called a barbershop....
s used them to cut hair close and fast. The hair was picked up in locks and the head was rapidly depilated. Such haircuts became popular among boys, mostly in schools, and young men in the military
Military
A military is an organization authorized by its greater society to use lethal force, usually including use of weapons, in defending its country by combating actual or perceived threats. The military may have additional functions of use to its greater society, such as advancing a political agenda e.g...
and in prison
Prison
A prison is a place in which people are physically confined and, usually, deprived of a range of personal freedoms. Imprisonment or incarceration is a legal penalty that may be imposed by the state for the commission of a crime...
s.

While they were widely used in the past, the advent and reduction in cost of electric hair clippers has led to their largely replacing manual clippers. Some barbers in Western countries continue to use them for trimming. They are also used in the Russian army: when conscripts enter bootcamp, they cut their hair close to the skin, sometimes using manual clippers.
In Greece
Greece
Greece , officially the Hellenic Republic , and historically Hellas or the Republic of Greece in English, is a country in southeastern Europe....
male students had their heads shaved with manual hair clippers from the early 20th century until it was abolished in 1982. The same practice was used in the military, where recruits had their heads shaved as they set foot in the boot camp. In the 1950s and 1960s a law was implemented in Greece whereby head shaving with manual clippers was to be used as a punishment for young people caught by police, such as teddyboys
Teddy Boy
The British Teddy Boy subculture is typified by young men wearing clothes that were partly inspired by the styles worn by dandies in the Edwardian period, styles which Savile Row tailors had attempted to re-introduce in Britain after World War II...
and prostitutes. This practice was extended to Greek hippies and leftist youths during the 1967-73 military regime. Obligatory hair clipping was abolished in Greece in 1982.

Manual hair clippers are used extensively by barbers in India
India
India , officially the Republic of India , is a country in South Asia. It is the seventh-largest country by geographical area, the second-most populous country with over 1.2 billion people, and the most populous democracy in the world...
to give short back and sides haircuts.

Electric hair clippers work in the same way as manual ones, but are driven by an electric motor which makes the blades oscillate from side to side. They have gradually displaced manual hair clippers in industrialized countries.

In early 1921 Mathew Andis, Sr. built a working model of an electric clipper that withstood a wide range of performance tests. Production of these new clippers began in the basement of his home, with help from Anna, Mathew’s wife. Mathew sold the electric clippers door to door to barbershops in Racine, Wisconsin
Racine, Wisconsin
Racine is a city in and the county seat of Racine County, Wisconsin, United States. According to 2008 U.S. Census Bureau estimates, the city had a population of 82,196...
and the surrounding area. A year later, he established the Andis Clipper Company. Today, Andis Company remains a family-held business, and manufactures hand-held tools to trim, cut, curl, straighten and dry hair. In 1928 the John Oster Manufacturing Company
John Oster Manufacturing Company
The John Oster Manufacturing Company was a maker of small appliances. The Oster brand is continued today as a trademark of the Sunbeam Corporation....
entered the electric clipper market and became an industry standard in the USA. Many other companies make electric clippers, including very cheap unbranded units usually made in China
China
Chinese civilization may refer to:* China for more general discussion of the country.* Chinese culture* Greater China, the transnational community of ethnic Chinese.* History of China* Sinosphere, the area historically affected by Chinese culture...
.

There is a range of electric hair clippers from bargain consumer units, sometimes sold with accessories such as clipper guides for adjusting the length of the cut, to clippers for hair-care professionals. The quality difference between the consumer grade and professional grade electric clippers has narrowed significantly over the years. The primary difference between the two grades is usually added thermal insulation to prevent the unit from heating too much during the prolonged use of professional operation. Professional units may have more durable metal parts in place of some plastic parts in home-use units.

Blades are usually made of stainless steel
Stainless steel
In metallurgy, stainless steel, also known as inox steel or inox from French "inoxydable", is defined as a steel alloy with a minimum of 10.5 or 11% chromium content by mass....
, which is much less prone to rust
Rust
Rust is a general term for a series of iron oxides. In colloquial usage, the term is applied to red oxides, formed by the reaction of iron and oxygen in the presence of water or air moisture...
ing than normal steel
Steel
Steel is an alloy that consists mostly of iron and has a carbon content between 0.2% and 2.1% by weight, depending on the grade. Carbon is the most common alloying material for iron, but various other alloying elements are used, such as manganese, chromium, vanadium, and tungsten...
.