Encyclopedia
The madhhab
Madhhab
is a Muslim school of law or fiqh . In the first 150 years of Islam, there were many such "schools". In fact, several of the Sahābah, or contemporary "companions" of Muhammad, are credited with founding their own...
is one of the schools of Fiqh
Fiqh
Fiqh is Islamic jurisprudence. Fiqh is an expansion of the code of conduct expounded in the Quran, often supplemented by tradition and implemented by the rulings and interpretations of Islamic jurists....
or religious law within Sunni Islam
Sunni Islam
Sunni Islam is the largest branch of Islam. Sunni Muslims are referred to in Arabic as ʾAhl ūs-Sunnah wa āl-Ǧamāʿah or ʾAhl ūs-Sunnah for short; in English, they are known as Sunni Muslims, Sunnis or Sunnites....
. It is the second-largest of the four schools, followed by approximately 25% of Muslim
Muslim
A Muslim, also spelled Moslem, is an adherent of Islam, a monotheistic, Abrahamic religion based on the Quran, which Muslims consider the verbatim word of God as revealed to prophet Muhammad. "Muslim" is the Arabic term for "submitter" .Muslims believe that God is one and incomparable...
s, mostly in North Africa
North Africa
North Africa or Northern Africa is the northernmost region of the African continent, linked by the Sahara to Sub-Saharan Africa. Geopolitically, the United Nations definition of Northern Africa includes eight countries or territories; Algeria, Egypt, Libya, Morocco, South Sudan, Sudan, Tunisia, and...
, West Africa
West Africa
West Africa or Western Africa is the westernmost region of the African continent. Geopolitically, the UN definition of Western Africa includes the following 16 countries and an area of approximately 5 million square km:-Flags of West Africa:...
, the United Arab Emirates
United Arab Emirates
The United Arab Emirates, abbreviated as the UAE, or shortened to "the Emirates", is a state situated in the southeast of the Arabian Peninsula in Western Asia on the Persian Gulf, bordering Oman, and Saudi Arabia, and sharing sea borders with Iraq, Kuwait, Bahrain, Qatar, and Iran.The UAE is a...
, Kuwait
Kuwait
The State of Kuwait is a sovereign Arab state situated in the north-east of the Arabian Peninsula in Western Asia. It is bordered by Saudi Arabia to the south at Khafji, and Iraq to the north at Basra. It lies on the north-western shore of the Persian Gulf. The name Kuwait is derived from the...
, and in some parts of Saudi Arabia
Saudi Arabia
The Kingdom of Saudi Arabia , commonly known in British English as Saudi Arabia and in Arabic as as-Sa‘ūdiyyah , is the largest state in Western Asia by land area, constituting the bulk of the Arabian Peninsula, and the second-largest in the Arab World...
. In the past, it was also followed in parts of Europe under Islamic rule
Islam in Europe
This article deals with the history and evolution of the presence of Islam in Europe. According to the German , the total number of Muslims in Europe in 2007 was about 53 million , excluding Turkey. The total number of Muslims in the European Union in 2007 was about 16 million .-Early history:Islam...
, particularly Islamic Spain
Al-Andalus
Al-Andalus was the Arabic name given to a nation and territorial region also commonly referred to as Moorish Iberia. The name describes parts of the Iberian Peninsula and Septimania governed by Muslims , at various times in the period between 711 and 1492, although the territorial boundaries...
and the Emirate of Sicily
Emirate of Sicily
The Emirate of Sicily was an Islamic state on the island of Sicily , which existed from 965 to 1072.-First Arab invasions of Sicily:...
.


The basis for the School of the City of Light, Medina Munawwarah

The Mālikī school derives from the work of Mālik ibn Anas
Malik ibn Anas
Mālik ibn Anas ibn Mālik ibn Abī 'Āmir al-Asbahī is known as "Imam Malik," the "Sheikh of Islam", the "Proof of the Community," and "Imam of the Abode of Emigration." He was one of the most highly respected scholars of fiqh in Sunni Islam...
, primarily the Muwaṭṭah and the Mudawwanah
Mudawana
The Mudawana is the personal status code, also known as the family code, in Moroccan law. It concerns issues related to the family, including the regulation of marriage, polygamy, divorce, inheritance, and child custody. Originally based on the Maliki school of Sunni Islamic jurisprudence, it was...
. The Muwaṭṭah is a collection of hadith
Hadith
The term Hadīth is used to denote a saying or an act or tacit approval or criticism ascribed either validly or invalidly to the Islamic prophet Muhammad....
s which are regarded as sound and find their place in al-Bukhārī
Sahih al-Bukhari
Ṣaḥīḥ al-Bukhārī , as it is commonly referred to, is one of the six canonical hadith collections of Islam. These prophetic traditions, or hadith, were collected by the Persian Muslim scholar Muhammad ibn Ismail al-Bukhari, after being transmitted orally for generations. Muslims view this as one of...
with some commentary from Mālik regarding the ‘amal "practices" of the people of Medina and where the ‘amal is in compliance with or in variance with the hadiths reported. This is because Mālik (and what would later be the school after his name) regarded the ‘amal of Medina (the first three generations) to be a superior proof of the "living" sunnah than isolated, although sound, hadiths.

The second main source, al-Mudawwanah al-Kubrā, is the collaborator work of Mālik's longtime student, Ibn Qāsim and his mujtahid student, Saḥnūn
Sahnun
Sahnun ibn Sa'id ibn Habib at-Tanukhi was a jurist in the Maliki school from Qayrawan in modern-day Tunisia.-Biography:...
. The Mudawwanah consists of the notes of Ibn Qāsim from his sessions of learning with Mālik and answers to legal questions raised by Saḥnūn in which Ibn Qāsim quotes from Mālik, and where no notes existed, his own legal reasoning based upon the principles he learned from Mālik. These two books, i.e. the Muwaṭṭah and Mudawwanah, along with other primary books taken from other prominent students of Mālik, would find their way into the Mukhtaṣar Khalīl, which would form the basis for the later Mālikī madhhab.

When forced to rely upon conflicting authenticated hadiths to derive a ruling, Mālikīs would then choose the hadith that has a Medinan origin, meaning the transmitter(s) resided in Medina. To summarize, in the Mālikī madhhab the "living sunnah" of the salaf of Medina substantiates the single reported hadith, not the other way around. This is probably what distinguishes the Mālikī madhab the most from the Shāfi‘ī, Ḥanbalī, and Ḥanafī madhāhib respectively.

This source, according to Mālik, sometimes supersedes hadith
Hadith
The term Hadīth is used to denote a saying or an act or tacit approval or criticism ascribed either validly or invalidly to the Islamic prophet Muhammad....
, because the practice of the people of Medina was considered "living sunnah," in as much as Muhammad migrated there, lived there and died there, and most of his companions lived there during his life and after his death. The result is what would appear to be a much more limited reliance upon ṣaḥīḥ hadiths than is found in other schools, but in actuality, serves to strengthen hadiths related to actual practice.

Mālik was particularly scrupulous about authenticating his sources when he did appeal to them, however, and his comparatively small collection of aḥādith, known as al-Muwaṭṭah "The Approved", is highly regarded. Mālik is said to have explained the title as follows: "I showed my book to seventy jurists of Medina, and every single one of them approved me for it, so I named it "The Approved".


Notable differences in prayer from other madhabs 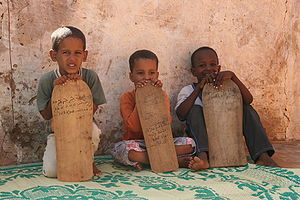 There are slight differences in the preferred methods of ṣalāt, or prayer, in the Māliki school.