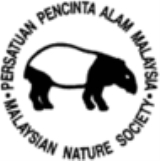 Encyclopedia
Malaysian Nature Society (MNS; Persatuan Pencinta Alam Malaysia in Malay
Malay language
Malay is a major language of the Austronesian family. It is the official language of Malaysia , Indonesia , Brunei and Singapore...
) is the oldest and one of the most prominent environmental not for profit, non-governmental organization
Non-governmental organization
A non-governmental organization is a legally constituted organization created by natural or legal persons that operates independently from any government. The term originated from the United Nations , and is normally used to refer to organizations that do not form part of the government and are...
s in Malaysia. It was first established, as the Malayan Nature Society, with the launch of the Malayan Nature Journal, in 1940. Initially primarily as a scientific organisation, today MNS is involved in a wide range of environmental activities and campaigns. In 2008 MNS was awarded the inaugural Merdeka Award
Merdeka Award
How the Merdeka Award came to beThe Merdeka Award was founded on July 27, 2007, in conjunction with the celebration of Malaysia’s 50th anniversary of its independence...
for the environment, primarily for its efforts in campaigning for the protection of the Belum-Temengor
Belum-Temengor
Belum-Temengor is the largest continuous forest complex in Peninsular Malaysia. Specifically, it is located in the Malaysian state of Perak and crosses into Southern Thailand. Belum-Temengor is divided into two sections. Belum is located at up north right by the Malaysia-Thailand border while...
forests of Malaysia. MNS is a voluntary, membership-based organisation with approximately 3800 members.

The organization place upon itself the responsibility to promote the study, appreciation, conservation and protection of Malaysia's natural heritage.

MNS has been credited for a number of conservation achievements as a result of public campaigns. One of the first of these successes was the halting of the quarrying at Batu Caves
Batu Caves
Batu Caves , is a limestone hill, which has a series of caves and cave temples, located in Gombak district, north of Kuala Lumpur, Malaysia. It takes its name from the Sungai Batu or Batu River, which flows past the hill. Batu Caves is also the name of the nearby village.The cave is one of the...
in 1980. This was followed by the creation of Endau Rompin National Park
Endau Rompin National Park
Endau Rompin National Park is a protected tropical rainforest in Malaysia. It is an area south of the state of Pahang and to the northeast of Johor covering an approximate area of 870 km², effectively making it is the second largest national park in Peninsular Malaysia after Taman Negara, with...
, following its expeditions there in 1985 and 1986. More recently, it succeeded in its campaigns to get the northern part of Belum-Temengor
Belum-Temengor
Belum-Temengor is the largest continuous forest complex in Peninsular Malaysia. Specifically, it is located in the Malaysian state of Perak and crosses into Southern Thailand. Belum-Temengor is divided into two sections. Belum is located at up north right by the Malaysia-Thailand border while...
declared a state park and for a national park to be establish on Penang
Penang
Penang is a state in Malaysia and the name of its constituent island, located on the northwest coast of Peninsular Malaysia by the Strait of Malacca. It is bordered by Kedah in the north and east, and Perak in the south. Penang is the second smallest Malaysian state in area after Perlis, and the...
island.

MNS member activities, such as evening talks and excursions on natural history topics, are organised through a network of local branches. Several branches have special interest groups focusing on one particular activity, such as bird watching, nature photography, or jungle trekking. Branches are also active in local conservation projects.

MNS runs a program of Nature Clubs for schools throughout Malaysia. Currently, approximately 300 school participate in the program. In addition, MNS runs education programs at Rimba Ilmu of the Universiti Malaya and at the Forest Research Institute of Malaysia (FRIM).

MNS reaches out to the public via its website (www.mns.my) and a number of associated online initiatives (see below).

In addition, MNS has the following periodical publications:
The MNS Conservation Publication series are a collection of reports and advisory papers.

The society logo is based on a Malayan Tapir
Malayan Tapir
The Malayan Tapir , also called the Asian Tapir, is the largest of the four species of tapir and the only one native to Asia. The scientific name refers to the East Indies, the species' natural habitat...
. Under the IUCN Red List, the species is listed as vulnerable. The species is distributed in Sumatra
Sumatra
Sumatra is an island in western Indonesia, westernmost of the Sunda Islands. It is the largest island entirely in Indonesia , and the sixth largest island in the world at 473,481 km2 with a population of 50,365,538...
and the Malay Peninsula
Malay Peninsula
The Malay Peninsula or Thai-Malay Peninsula is a peninsula in Southeast Asia. The land mass runs approximately north-south and, at its terminus, is the southern-most point of the Asian mainland...
, Thailand
Thailand
Thailand , officially the Kingdom of Thailand , formerly known as Siam , is a country located at the centre of the Indochina peninsula and Southeast Asia. It is bordered to the north by Burma and Laos, to the east by Laos and Cambodia, to the south by the Gulf of Thailand and Malaysia, and to the...
and Myanmar
Myanmar
Burma , officially the Republic of the Union of Myanmar , is a country in Southeast Asia. Burma is bordered by China on the northeast, Laos on the east, Thailand on the southeast, Bangladesh on the west, India on the northwest, the Bay of Bengal to the southwest, and the Andaman Sea on the south....
. Sightings have been recorded at other places such as deeper in the Indochina
Indochina
The Indochinese peninsula, is a region in Southeast Asia. It lies roughly southwest of China, and east of India. The name has its origins in the French, Indochine, as a combination of the names of "China" and "India", and was adopted when French colonizers in Vietnam began expanding their territory...
but such reports are unconfirmed.

Several notable expatriate and local naturalists have been awarded honorary membership of MNS including Henry Nicholas Ridley
Henry Nicholas Ridley
Henry Nicholas Ridley CMG , MA , FRS, FLS, F.R.H.S. was an English botanist and geologist.Born at West Harling Hall, Norfolk, England...
, Edred John Henry Corner, John Leonard Harrison
John Leonard Harrison
John Leonard Harrison was a British zoologist.He came to Singapore as major of the British army in 1945 where he met his later wife Song Kiew Ying. He worked as zoologist at the Queensland Institute of Medical Research in Australia in 1951. In 1961, he was an associate professor of Zoology at...
, Loke Wan Tho
Loke Wan Tho
Loke Wan Tho born in Kuala Lumpur , was a cinema magnate, ornithologist, and photographer. He was the founder of Cathay Organisation in Singapore and Malaysia, and Motion Picture and General Investments Limited in Hong Kong....
, Gladys Le Mare
Gladys Le Mare
Gladys Le Mare née Keay graduated with first class honours in zoology from St Hugh's College Oxford. She taught in South Africa until 1939 when she left for Singapore to marry Deryck Watts Le Mare , then Asst Director of Fisheries, Straits Settlements.In 1940, Gladys became one of the founders...
and the 6th Earl of Cranbrook
Earl of Cranbrook
Earl of Cranbrook, in the County of Kent, is a title in the Peerage of the United Kingdom. It was created in 1892 for the prominent Conservative politician Gathorne Gathorne-Hardy, 1st Viscount Cranbrook. He notably held office as Home Secretary, Secretary of State for War and Secretary of State...
. Past presidents of MNS include Elliott McClure
Elliott McClure
Dr Howe Elliott McClure, was an American ornithologist and epidemiologist who worked on bird transmitted diseases in Asia, particularly Japanese Encephalitis.-Life and work:...
and Salleh Mohd. Nor.