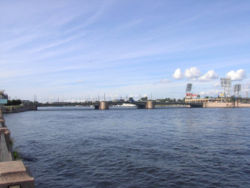 Malaya Neva is the second largest distributary
Distributary
A distributary, or a distributary channel, is a stream that branches off and flows away from a main stream channel. They are a common feature of river deltas. The phenomenon is known as river bifurcation. The opposite of a distributary is a tributary...
of the Neva River
Neva River
The Neva is a river in northwestern Russia flowing from Lake Ladoga through the western part of Leningrad Oblast to the Neva Bay of the Gulf of Finland. Despite its modest length , it is the third largest river in Europe in terms of average discharge .The Neva is the only river flowing from Lake...
. The Neva splits into Bolshaya Neva
Bolshaya Neva
Bolshaya Neva is the largest armlet of Neva river. It starts near the Vasilievsky Island's Strelka .The length of Bolshaya Neva is 3.5 km, the width is from 200 to 400 meters, depth up to 12.8 meters...
(the southern armlet) and Malaya Neva (the northern armlet) near the Vasilievsky Island
Vasilievsky Island
Vasilyevsky Island is an island in Saint Petersburg, Russia, bordered by the rivers Bolshaya Neva and Malaya Neva in the south and northeast, and by the Gulf of Finland in the west. Vasilyevsky Island is separated from Dekabristov Island by the Smolenka River...
's Strelka (easternmost tip of the island), in the historic center of the city of Saint Petersburg
Saint Petersburg
Saint Petersburg is a city and a federal subject of Russia located on the Neva River at the head of the Gulf of Finland on the Baltic Sea...
.