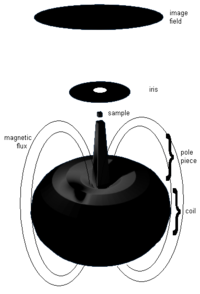 A magnetic lens is a device for the focus
Focus
Focus, FOCUS, or foci may refer to:In science, mathematics or computing:*Focus , selectively concentrating on one aspect of the environment while ignoring other things...
ing or deflection of charged particles, such as electron
Electron
The electron is a subatomic particle with a negative elementary electric charge. It has no known components or substructure; in other words, it is generally thought to be an elementary particle. An electron has a mass that is approximately 1/1836 that of the proton...
s or ion
Ion
An ion is an atom or molecule in which the total number of electrons is not equal to the total number of protons, giving it a net positive or negative electrical charge. The name was given by physicist Michael Faraday for the substances that allow a current to pass between electrodes in a...
s. Charged particles are deflected based upon the strength of the magnetic field, which can be varied by controlling the current flowing through several electromagnet
Electromagnet
An electromagnet is a type of magnet in which the magnetic field is produced by the flow of electric current. The magnetic field disappears when the current is turned off...
s. These typically find diverse applications, from cathode ray tube
Cathode ray tube
The cathode ray tube is a vacuum tube containing an electron gun and a fluorescent screen used to view images. It has a means to accelerate and deflect the electron beam onto the fluorescent screen to create the images. The image may represent electrical waveforms , pictures , radar targets and...
s to electron microscopy.

A magnetic lens typically consists of several electromagnets arranged in a quadrupole
Quadrupole
A quadrupole or quadrapole is one of a sequence of configurations of—for example—electric charge or current, or gravitational mass that can exist in ideal form, but it is usually just part of a multipole expansion of a more complex structure reflecting various orders of complexity.-Mathematical...
(or quadrapole) or sextupole
Sextupole magnet
Sextupole magnets consist of groups of six magnets set out in an arrangement of alternating north and south magnetic poles arranged around an axis. They are used in particle beam control in particle accelerators....
format. This consists of several electromagnetic coils placed at the vertices of a square or hexagon respectively. From this configuration a convex magnetic field can be formed, which has the effect of focusing (or diverging) charged particles.

The passing electron is subjected to two vector forces, one parallel to the core (

), and one parallel to the radius of the lens (

which in turn focus the electron. Note that the magnetic field is inhomogeneous, electrons close to the center are less strongly deflected than those passing the lens far from the axis.