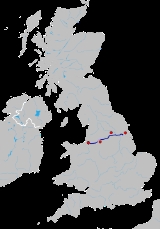 Overview
The M62 motorway is a west–east trans-Pennine
Pennines
The Pennines are a low-rising mountain range, separating the North West of England from Yorkshire and the North East.Often described as the "backbone of England", they form a more-or-less continuous range stretching from the Peak District in Derbyshire, around the northern and eastern edges of...
motorway in Northern England
Northern England
Northern England, also known as the North of England, the North or the North Country, is a cultural region of England. It is not an official government region, but rather an informal amalgamation of counties. The southern extent of the region is roughly the River Trent, while the North is bordered...
, connecting the cities of Liverpool
Liverpool
Liverpool is a city and metropolitan borough of Merseyside, England, along the eastern side of the Mersey Estuary. It was founded as a borough in 1207 and was granted city status in 1880...
and Hull
Kingston upon Hull
Kingston upon Hull , usually referred to as Hull, is a city and unitary authority area in the ceremonial county of the East Riding of Yorkshire, England. It stands on the River Hull at its junction with the Humber estuary, 25 miles inland from the North Sea. Hull has a resident population of...
via Manchester
Manchester
Manchester is a city and metropolitan borough in Greater Manchester, England. According to the Office for National Statistics, the 2010 mid-year population estimate for Manchester was 498,800. Manchester lies within one of the UK's largest metropolitan areas, the metropolitan county of Greater...
and Leeds
Leeds
Leeds is a city and metropolitan borough in West Yorkshire, England. In 2001 Leeds' main urban subdivision had a population of 443,247, while the entire city has a population of 798,800 , making it the 30th-most populous city in the European Union.Leeds is the cultural, financial and commercial...
. The road also forms part of the unsigned Euroroutes
International E-road network
The international E-road network is a numbering system for roads in Europe developed by the United Nations Economic Commission for Europe . The network is numbered from E 1 up and its roads cross national borders...
E20
European route E20
The European route E 20 is part of the United Nations International E-road network.It runs roughly west-east through Ireland, the United Kingdom, Denmark, Sweden, Estonia and finally Russia. The length is . The road is not continuous, at three points, a sea crossing is required. ...
(Shannon
Shannon, County Clare
Shannon or Shannon Town , named after the river near which it stands, is a town located in County Clare. It was given town status on 1 January 1982. The town is located just off the N19 road, a spur of the N18/M18 road between Limerick city and Ennis....
to Saint Petersburg
Saint Petersburg
Saint Petersburg is a city and a federal subject of Russia located on the Neva River at the head of the Gulf of Finland on the Baltic Sea...
) and E22
European route E22
The European route E 22 is one of the longest European routes. It has a length of about . Many of the E-roads have been extended into Asia since the year 2000; the E 22 was extended on 24 June 2002.-United Kingdom:...
(Holyhead
Holyhead
Holyhead is the largest town in the county of Anglesey in the North Wales. It is also a major port adjacent to the Irish Sea serving Ireland....
to Ishim
Ishim
Ishim is a town in the south of Tyumen Oblast, Russia. Population: -History:It was founded in 1670 as the village of Korkina Sloboda. In 1721 by the order of Tsar Peter the Great the village gained the right to establish Nikolskaya Trade Fair which rapidly became one of the most important trade...
). The road is 107 miles (172.2 km) long; for 7 miles (11.3 km), it shares its route
Concurrency (road)
A concurrency, overlap, or coincidence in a road network is an instance of one physical road bearing two or more different highway, motorway, or other route numbers...
with the M60 motorway
M60 motorway
The M60 motorway, or Manchester Orbital, is an orbital motorway circling Greater Manchester, a metropolitan county in North West England. It passes through all Greater Manchester's metropolitan boroughs except for Wigan and Bolton...
around Manchester.
The motorway, which was first proposed in the 1930s, and originally conceived as two separate routes, was built in stages between 1971 and 1976, with construction beginning at Pole Moor and finishing in Tarbock
Tarbock
Tarbock is a village and civil parish within the Metropolitan Borough of Knowsley, in Merseyside, England. It is situated to the south east of Huyton and to the east of Netherley. The village itself is from Liverpool city centre, from Widnes and from Prescot. The M62 motorway junction 6 is in...
on the outskirts of Liverpool.

Was ther a village submerged in water along the motorway?
More
x