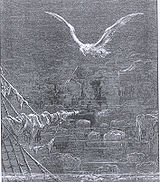 Lyrical Ballads, with a Few Other Poems is a collection of poems by William Wordsworth
William Wordsworth
William Wordsworth was a major English Romantic poet who, with Samuel Taylor Coleridge, helped to launch the Romantic Age in English literature with the 1798 joint publication Lyrical Ballads....
and Samuel Taylor Coleridge
Samuel Taylor Coleridge
Samuel Taylor Coleridge was an English poet, Romantic, literary critic and philosopher who, with his friend William Wordsworth, was a founder of the Romantic Movement in England and a member of the Lake Poets. He is probably best known for his poems The Rime of the Ancient Mariner and Kubla...
, first published in 1798 and generally considered to have marked the beginning of the English Romantic movement in literature. The immediate effect on critics was modest, but it became and remains a landmark, changing the course of English literature
English literature
English literature is the literature written in the English language, including literature composed in English by writers not necessarily from England; for example, Robert Burns was Scottish, James Joyce was Irish, Joseph Conrad was Polish, Dylan Thomas was Welsh, Edgar Allan Poe was American, J....
and poetry
English poetry
The history of English poetry stretches from the middle of the 7th century to the present day. Over this period, English poets have written some of the most enduring poems in Western culture, and the language and its poetry have spread around the globe. Consequently, the term English poetry is...
.

Most of the poems in the 1798 edition were written by Wordsworth, with Coleridge contributing only four poems to the collection, including one of his most famous works, "The Rime of the Ancient Mariner
The Rime of the Ancient Mariner
The Rime of the Ancient Mariner is the longest major poem by the English poet Samuel Taylor Coleridge, written in 1797–98 and was published in 1798 in the first edition of Lyrical Ballads. Modern editions use a later revised version printed in 1817 that featured a gloss...
". (Additionally, though only the two writers are credited for the works, William's sister Dorothy Wordsworth
Dorothy Wordsworth
Dorothy Mae Ann Wordsworth was an English author, poet and diarist. She was the sister of the Romantic poet William Wordsworth, and the two were close for all of their lives...
's diary which held powerful descriptions of everyday surroundings influenced William's poetry immensely).

A second edition was published in 1800, in which Wordsworth included additional poems and a preface
Preface to the Lyrical Ballads
The Preface to the Lyrical Ballads is an essay, composed by William Wordsworth for the second edition of the poetry collection Lyrical Ballads, and then greatly expanded in the third edition of 1802.-External links:**...
detailing the pair's avowed poetical principles. Another edition was published in 1802, Wordsworth added an appendix titled Poetic Diction in which he expanded the ideas set forth in the preface.

Wordsworth and Coleridge set out to overturn what they considered the priggish, learned and highly sculpted forms of 18th century English poetry and bring poetry within the reach of the average person by writing the verses using normal, everyday language. They place an emphasis on the vitality of the living voice that the poor use to express their reality. Using this language also helps assert the universality of human emotions. Even the title of the collection recalls rustic forms of art - the word "lyrical" links the poems with the ancient rustic bards and lends an air of spontaneity, while "ballads" are an oral mode of storytelling used by the common people.

In the 'Advertisement' included in the 1798 edition, Wordsworth explained his poetical concept:


The majority of the following poems are to be considered as experiments. They were written chiefly with a view to ascertain how far the language of conversation in the middle and lower classes of society is adapted to the purpose of poetic pleasure.

If the experiment with vernacular language was not enough of a departure from the norm, the focus on simple, uneducated country people as the subject of poetry was a signal shift to modern literature.
One of the main themes of "Lyrical Ballads" is the return to the original state of nature, in which people led a purer and more innocent existence. Wordsworth subscribed to Rousseau's belief that humanity was essentially good but was corrupted by the influence of society. This may be linked with the sentiments spreading through Europe just prior to the French Revolution.

↑ indicates the poem is by Coleridge

↨ indicates the poem was in the 1798 edition.