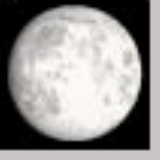 Ive been researching about the moon for quite some time now and i have been told by a few that the new moon was not viewable because the moon phase w...
More 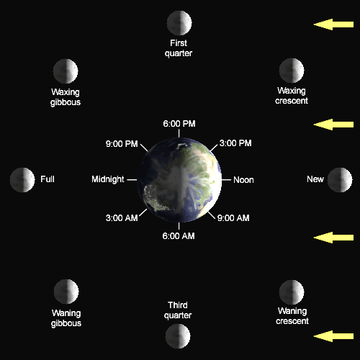 Lunar phases are the result of looking at the illuminated half of the Moon from different viewing geometries; they are not caused by the shadow of the Earth or umbra
Umbra
The umbra, penumbra and antumbra are the names given to three distinct parts of a shadow, created by any light source. For a point source only the umbra is cast.These names are most often used to refer to the shadows cast by celestial bodies....
falling on the Moon's surface (this occurs only during a lunar eclipse
Lunar eclipse
A lunar eclipse occurs when the Moon passes behind the Earth so that the Earth blocks the Sun's rays from striking the Moon. This can occur only when the Sun, Earth, and Moon are aligned exactly, or very closely so, with the Earth in the middle. Hence, a lunar eclipse can only occur the night of a...
).

The Moon exhibits different phases as the relative position of the Sun, Earth and Moon changes, appearing as a full moon when the Sun and Moon are on opposite sides of the Earth and as a new moon (dark moon
Dark moon
A dark moon describes the Moon during that time that it is invisible against the backdrop of the Sun in the sky. The duration of a dark moon is between 1.5 and 3.5 days, depending on the orientation of the Earth and Sun....
) when they are on the same side. The phases of full moon and new moon are examples of syzygies
Syzygy (astronomy)
In astronomy, a syzygy is a straight line configuration of three celestial bodies in a gravitational system. The word is usually used in reference to the Sun, the Earth and either the Moon or a planet, where the latter is in conjunction or opposition. Solar and lunar eclipses occur at times of...
, which occur when the Earth, Moon, and Sun lie (approximately) in a straight line. The time between two full moons (a Lunar month
Lunar month
In lunar calendars, a lunar month is the time between two identical syzygies . There are many variations. In Middle-Eastern and European traditions, the month starts when the young crescent moon becomes first visible at evening after conjunction with the Sun one or two days before that evening...
) is about 29.53 days (29 days, 12 hours, 44 minutes) on average (hence, the concept of the time frame of an approximated month was derived). This synodic month is longer than the time
Orbital period
The orbital period is the time taken for a given object to make one complete orbit about another object.When mentioned without further qualification in astronomy this refers to the sidereal period of an astronomical object, which is calculated with respect to the stars.There are several kinds of...
it takes the Moon to make one orbit around the Earth with respect to the fixed stars (the sidereal month), which is about 27.32 days. This difference is caused by the fact that the Earth-Moon system is orbiting around the Sun at the same time the Moon is orbiting around the Earth.

The actual time between two syzygies or two phases is quite variable because the orbit of the Moon is elliptic and subject to various periodic perturbations, which change the velocity of the Moon. When the moon is closer to the earth, it moves faster; when it is farther, it moves slower. The orbit of the Earth around the Sun is also elliptic, so the speed of the Earth also varies, which also affects the phases of the Moon.

It might be expected that once every month when the Moon passes between Earth and the Sun during a new moon, its shadow would fall on Earth causing a solar eclipse
Solar eclipse
As seen from the Earth, a solar eclipse occurs when the Moon passes between the Sun and the Earth, and the Moon fully or partially blocks the Sun as viewed from a location on Earth. This can happen only during a new moon, when the Sun and the Moon are in conjunction as seen from Earth. At least...
. Likewise, during every full moon one might expect the Earth's shadow to fall on the Moon, causing a lunar eclipse
Lunar eclipse
A lunar eclipse occurs when the Moon passes behind the Earth so that the Earth blocks the Sun's rays from striking the Moon. This can occur only when the Sun, Earth, and Moon are aligned exactly, or very closely so, with the Earth in the middle. Hence, a lunar eclipse can only occur the night of a...
. Solar and lunar eclipses are not observed every month because the plane of the Moon's orbit around the Earth is tilted by about five degrees with respect to the plane of Earth's orbit around the Sun (the plane of the ecliptic
Plane of the ecliptic
The plane of the ecliptic is the plane of the Earth's orbit around the Sun. It is the primary reference plane when describing the position of bodies in the Solar System, with celestial latitude being measured relative to the ecliptic plane. In the course of a year, the Sun's apparent path through...
). Thus, when new and full moons occur, the Moon usually lies to the north or south of a direct line through the Earth and Sun. Although an eclipse
Eclipse
An eclipse is an astronomical event that occurs when an astronomical object is temporarily obscured, either by passing into the shadow of another body or by having another body pass between it and the viewer...
can only occur when the Moon is either new or full, it must also be positioned very near the intersection of Earth's orbit plane about the Sun and the Moon's orbit plane about the Earth (that is, at one of its node
Lunar node
The lunar nodes are the orbital nodes of the Moon, that is, the points where the orbit of the Moon crosses the ecliptic . The ascending node is where the moon crosses to the north of the ecliptic...
s). This happens about twice per year, and so there are between four and seven eclipses in a calendar year. Most of these are quite insignificant; major eclipses of the Moon or Sun are rare.

The phases of the Moon have been given the following names, in sequential order:

When the Sun and Moon are aligned on the same side of the Earth the Moon is "new", and the side of the Moon visible from Earth is not illuminated by the Sun. As the Moon waxes (the amount of illuminated surface as seen from Earth is increasing), the lunar phases progress from new moon, crescent moon, first-quarter moon, gibbous moon and full moon phases, before returning through the gibbous moon, third-quarter (or last quarter) moon, crescent moon and new moon phases. The terms old moon and new moon are interchangeable, although new moon is more common. Half moon is often used to mean the first- and third-quarter moons, while the term 'quarter' refers to the extent of the moon's cycle around the Earth, not its shape.

The average calendrical month, which is 1/12 of a year, is about 30.44 days, while the Moon's phase (synodic) cycle repeats on average every 29.53 days. Therefore the timing of the Moon's phases shifts by an average of almost one day for each successive month. Photographing the Moon's phase every day for a month, starting in the evening after sunset, and repeating approximately 25 minutes later each successive day, ending in the morning before sunrise, would create a composite image like the example calendar from May 8, 2005, to June 6, 2005. There is no picture on May 20 since a picture would be taken before midnight on May 19, and after midnight on May 21. Similarly, on a calendar listing moon rise or set times, some days will appear to be skipped. When the Moon rises just before midnight one night it will rise just after midnight the next (so too with setting). The 'skipped day' is just a calendar artifact and not the Moon behaving strangely.

The approximate age of the moon, and hence the approximate phase, can be calculated for any date by calculating the number of days since a known new moon (such as January 1, 1900 or August 11, 1999) and reducing this modulo 29.530588853 (the length of a synodic month). The difference between two dates can be calculated by subtracting the Julian Day Number
Julian day
Julian day is used in the Julian date system of time measurement for scientific use by the astronomy community, presenting the interval of time in days and fractions of a day since January 1, 4713 BC Greenwich noon...
of one from that of the other, or there are simpler formulae giving (for instance) the number of days since December 31, 1899. This calculation of course assumes a perfectly circular orbit and hence may be incorrect by several hours (it also becomes less accurate the larger the difference between the required date and the reference date); it is accurate enough to use in a novelty clock application showing moon phase, but specialist usage taking account of lunar apogee and perigee requires a more elaborate calculation.