Encyclopedia
Luhansk (formerly Voroshilovgrad) also known as Lugansk is a city
City
A city is a relatively large and permanent settlement. Although there is no agreement on how a city is distinguished from a town within general English language meanings, many cities have a particular administrative, legal, or historical status based on local law.For example, in the U.S...
in southeastern Ukraine
Ukraine
Ukraine is a country in Eastern Europe. It has an area of 603,628 km², making it the second largest contiguous country on the European continent, after Russia...
. It is the administrative center
Capital City
Capital City was a television show produced by Euston Films which focused on the lives of investment bankers in London living and working on the corporate trading floor for the fictional international bank Shane-Longman....
of the Luhansk Oblast
Luhansk Oblast
Luhansk Oblast ) is the easternmost oblast of Ukraine. Its administrative center is Luhansk. The oblast was established in 1938 and bore the name Voroshilovgrad Oblast in honor of Kliment Voroshilov....
(province
Oblast
Oblast is a type of administrative division in Slavic countries, including some countries of the former Soviet Union. The word "oblast" is a loanword in English, but it is nevertheless often translated as "area", "zone", "province", or "region"...
). The city itself is also designated as its own separate municipality within the oblast. The current estimated population is around 445,900 (as of 2004).

The city traces its history to 1795, when the British industrialist Charles Gascoigne
Charles Gascoigne
Charles Gascoigne was a British industrialist at the beginning of the Industrial Revolution. He was a partner and manager of the Carron Company ironworks in its early years, but left in 1786, before the company's success became obvious, to reorganise the production of iron and cannon in Russia...
founded a metal factory there. It was the beginning of an industry that still thrives there today. Lugansk achieved the status of city in 1882. Located in the Donets Basin
Donets Basin
Donbas or Donbass , full rarely-used name Donets Basin , is a historical, economic and cultural region of eastern Ukraine. Originally a coal mining area, it has become a heavily industrialised territory suffering from urban decay and industrial pollution.-Geography:Donbas covers three...
, Lugansk was developed into an important industrial center of Eastern Europe
Eastern Europe
Eastern Europe is the eastern part of Europe. The term has widely disparate geopolitical, geographical, cultural and socioeconomic readings, which makes it highly context-dependent and even volatile, and there are "almost as many definitions of Eastern Europe as there are scholars of the region"...
, particularly a home to the major locomotive
Locomotive
A locomotive is a railway vehicle that provides the motive power for a train. The word originates from the Latin loco – "from a place", ablative of locus, "place" + Medieval Latin motivus, "causing motion", and is a shortened form of the term locomotive engine, first used in the early 19th...
-building company.
On November 5, 1935, the city was renamed Voroshilovgrad in honour of Soviet military commander and politician Kliment Voroshilov
Kliment Voroshilov
Kliment Yefremovich Voroshilov , popularly known as Klim Voroshilov was a Soviet military officer, politician, and statesman...
. On March 5, 1958, with the call of Khrushchev not to give names of living people to cities, the old name was reinstated. On January 5, 1970, after Voroshilov died, the name was changed again to Voroshilovgrad. Finally, on May 4, 1990, a decree of the Supreme Soviet of the Ukrainian SSR gave the city back its original name.

Luhansk is home to Zorya Luhansk
FC Zorya Luhansk
FC Zorya Luhansk , formerly known as Zorya Voroshilovgrad and Zorya-MALS, is a Ukrainian football team. Zorya Luhansk is based in the city of Luhansk , Luhansk Oblast, Ukraine.-History:...
which now plays in the Ukrainian Premier League
Ukrainian Premier League
The Ukrainian Premier League is the highest division of Ukrainian annual football championship. As the Supreme League it was founded in 1991 after the fold of the Soviet Union's Vysshaya Liga. In 2008 it was reformed into a more autonomous entity of the Football Federation of Ukraine and changed...
annual football
Football (soccer)
Association football, more commonly known as football or soccer, is a sport played between two teams of eleven players with a spherical ball...
championship and play at the Avanhard Stadium. The other football team is Dynamo Luhansk.

On September 7, 2006, Archaeologists in Ukraine claimed an ancient structure, which the press reported as a pyramid antedating those in Egypt by at least 300 years, was discovered near Luhansk. The stone foundations of the structure were said to resemble Aztec and Mayan pyramids in Mesoamerica
Mesoamerica
Mesoamerica is a region and culture area in the Americas, extending approximately from central Mexico to Belize, Guatemala, El Salvador, Honduras, Nicaragua, and Costa Rica, within which a number of pre-Columbian societies flourished before the Spanish colonization of the Americas in the 15th and...
. It was later concluded that the site in question was not a pyramid but still of great interest. 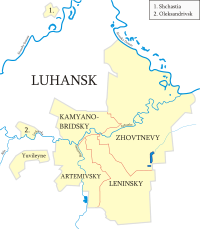