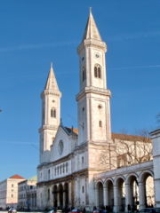 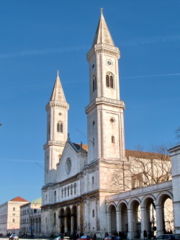 The Ludwigskirche is situated in the northern part of the Ludwigstrasse and was built by the architect Friedrich von Gärtner
Friedrich von Gärtner
Friedrich von Gärtner was a German architect.Gärtner and Leo von Klenze are the most well known architects of Bavaria during the reign of Ludwig I. His architecture was generally in the Romanesque style and much to the king's taste...
from 1829 onwards. The patron was King Ludwig I of Bavaria
Ludwig I of Bavaria
Ludwig I was a German king of Bavaria from 1825 until the 1848 revolutions in the German states.-Crown prince:...
. The facade with two steeples was constructed as balance to the Theatinerkirche
Theatinerkirche (Munich)
The Theatine Church of St. Cajetan is a Catholic church in Munich, southern Germany. Built from 1663 to 1690, it was founded by Elector Ferdinand Maria and his wife, Henriette Adelaide of Savoy, as a gesture of thanks for the birth of the long-awaited heir to the Bavarian crown, Prince Max...
, which stands diagonally opposite.

The frescoes of the church were created by Peter von Cornelius
Peter von Cornelius
Peter von Cornelius was a German painter.Cornelius was born in Düsseldorf.His father, who was inspector of the Düsseldorf gallery, died in 1799, and the young Cornelius was stimulated to extraordinary exertions...
. They are perhaps one of the most important mural works of modern times. The large fresco of the Last Judgment
Last Judgment
The Last Judgment, Final Judgment, Day of Judgment, Judgment Day, or The Day of the Lord in Christian theology, is the final and eternal judgment by God of every nation. The concept is found in all the Canonical gospels, particularly the Gospel of Matthew. It will purportedly take place after the...
(1836-1840), situated over the high altar, measures 62 ft in height by 38 ft in width. The frescoes of the Creator
Creator deity
A creator deity is a deity responsible for the creation of the world . In monotheism, the single God is often also the creator deity, while polytheistic traditions may or may not have creator deities...
, the Nativity
Nativity
-The birth of Jesus:* Nativity of Jesus, the Gospel story of the birth of Jesus* Nativity of Jesus in art, paintings depicting the Nativity* Nativity play, a dramatic production about the Nativity...
, and the Crucifixion
Crucifixion
Crucifixion is an ancient method of painful execution in which the condemned person is tied or nailed to a large wooden cross and left to hang until dead...
are also on a large scale. But the work was rejected by the King, and Cornelius left Munich shortly afterward. The sculptue Four Evangelists with Jesus Christ was designed by Ludwig von Schwanthaler.

The church was the model for many other churches, such as the Altlerchenfelder Pfarrkirche in Vienna
Vienna
Vienna is the capital and largest city of the Republic of Austria and one of the nine states of Austria. Vienna is Austria's primary city, with a population of about 1.723 million , and is by far the largest city in Austria, as well as its cultural, economic, and political centre...
, and Richard Upjohn's Congregational Church
Congregational church
Congregational churches are Protestant Christian churches practicing Congregationalist church governance, in which each congregation independently and autonomously runs its own affairs....
of the Pilgrims (1844-1846), in Brooklyn, New York, the first of the Rundbogenstil in North America. This was followed by St. George's Episcopal
St. George's Episcopal Church (Manhattan)
St. George's Episcopal Church is a historic church located at 209 East 16th Street at Rutherford Place, on Stuyvesant Square in Manhattan, New York City. Called "one of the first and most significant examples of Early Romanesque Revival church architecture in America", the church exterior was...
Church in New York City by Charles Bresch, and the Bowdoin College
Bowdoin College
Bowdoin College , founded in 1794, is an elite private liberal arts college located in the coastal Maine town of Brunswick, Maine. As of 2011, U.S. News and World Report ranks Bowdoin 6th among liberal arts colleges in the United States. At times, it was ranked as high as 4th in the country. It is...
Chapel in Brunswick, Maine
Brunswick, Maine
Brunswick is a town in Cumberland County, Maine, United States. The population was 20,278 at the 2010 census. It is part of the Portland-South Portland-Biddeford metropolitan area. Brunswick is home to Bowdoin College, the Bowdoin College Museum of Art, the Peary-MacMillan Arctic Museum, , and the...
.