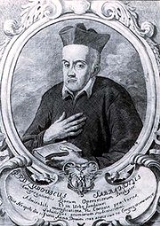 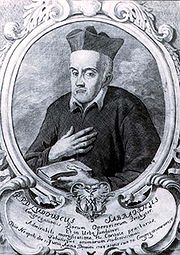 Venerable
Venerable
The Venerable is used as a style or epithet in several Christian churches. It is also the common English-language translation of a number of Buddhist titles.-Roman Catholic:...
Ludovico Sabbatini (30 August 1650 – 11 June 1724) was an Italian priest
Priest
A priest is a person authorized to perform the sacred rites of a religion, especially as a mediatory agent between humans and deities. They also have the authority or power to administer religious rites; in particular, rites of sacrifice to, and propitiation of, a deity or deities...
and religious
Religion
Religion is a collection of cultural systems, belief systems, and worldviews that establishes symbols that relate humanity to spirituality and, sometimes, to moral values. Many religions have narratives, symbols, traditions and sacred histories that are intended to give meaning to life or to...
educator, who was beatified
Beatification
Beatification is a recognition accorded by the Catholic Church of a dead person's entrance into Heaven and capacity to intercede on behalf of individuals who pray in his or her name . Beatification is the third of the four steps in the canonization process...
by the Catholic Church in 1765. He is venerated on 11 June, the day of his death.

Born in Naples
Naples
Naples is a city in Southern Italy, situated on the country's west coast by the Gulf of Naples. Lying between two notable volcanic regions, Mount Vesuvius and the Phlegraean Fields, it is the capital of the region of Campania and of the province of Naples...
, Italy, to a deeply religious family (one of his sisters was a nun, and three other brothers were priests), at a very young age Sabbatini dedicated himself to a religious life. He involved himself with the Congregazione dei Pii Operai (Congregation of Pious Workers), teaching religion to the children of the poor and manual laborers of Naples and helping perform mass
Mass
Mass can be defined as a quantitive measure of the resistance an object has to change in its velocity.In physics, mass commonly refers to any of the following three properties of matter, which have been shown experimentally to be equivalent:...
at the Chiesa de San Nicola alla Caritá. In this church he was in charge of the so-called Congregazione dei Figlioli (Congregation of Sons).

He was ordained a priest at age 24 and soon began to teach at the religious academies of San Giorgio Maggiore and Santa Maria ai Monte. In 1684 he founded a monastery
Monastery
Monastery denotes the building, or complex of buildings, that houses a room reserved for prayer as well as the domestic quarters and workplace of monastics, whether monks or nuns, and whether living in community or alone .Monasteries may vary greatly in size – a small dwelling accommodating only...
near the Santissima Annunziata
Santissima Annunziata
The Basilica of the Santissima Annunziata Maggiore is a church in Naples in southern Italy.The Annunziatas origins goes back to 1320 and has always been, in one form or another, an orphanage. Remade a first time in the early 16th century, by the mid 17th century, it was a full-fledged home, church,...
hospital, for wayward young women who wished to take religious order
Religious order
A religious order is a lineage of communities and organizations of people who live in some way set apart from society in accordance with their specific religious devotion, usually characterized by the principles of its founder's religious practice. The order is composed of initiates and, in some...
s.

In 1687, Father Sabbatini moved to Rome
Rome
Rome is the capital of Italy and the country's largest and most populated city and comune, with over 2.7 million residents in . The city is located in the central-western portion of the Italian Peninsula, on the Tiber River within the Lazio region of Italy.Rome's history spans two and a half...
in order to promote the Congregation of Pious Workers in the Papal States
Papal States
The Papal State, State of the Church, or Pontifical States were among the major historical states of Italy from roughly the 6th century until the Italian peninsula was unified in 1861 by the Kingdom of Piedmont-Sardinia .The Papal States comprised territories under...
. From that point, Sabbatini involved himself in many benevolent activities with the poor and ill in hospital
Hospital
A hospital is a health care institution providing patient treatment by specialized staff and equipment. Hospitals often, but not always, provide for inpatient care or longer-term patient stays....
s and prison
Prison
A prison is a place in which people are physically confined and, usually, deprived of a range of personal freedoms. Imprisonment or incarceration is a legal penalty that may be imposed by the state for the commission of a crime...
s, as well as aiding Jews. Some miraculous cures where attributed to him. http://www.findarticles.com/p/articles/mi_m2279/is_n148/ai_17474753/pg_6. He was widely admired for his goodness. Nevertheless, he continued working as a teacher, at the Collegio dei Catecumini, where he founded an academy of dogma
Dogma
Dogma is the established belief or doctrine held by a religion, or a particular group or organization. It is authoritative and not to be disputed, doubted, or diverged from, by the practitioners or believers...
and exegesis
Exegesis
Exegesis is a critical explanation or interpretation of a text, especially a religious text. Traditionally the term was used primarily for exegesis of the Bible; however, in contemporary usage it has broadened to mean a critical explanation of any text, and the term "Biblical exegesis" is used...
.

Returning to Naples in 1699, he was elected general provost
Provost (education)
A provost is the senior academic administrator at many institutions of higher education in the United States, Canada and Australia, the equivalent of a pro-vice-chancellor at some institutions in the United Kingdom and Ireland....
(Preposito Generale) of the Congregazione. For 25 years, he also directed the Congregazione dei Dottori e Cavalieri at San Giorgio Maggiore. He died in Naples.