Encyclopedia
Lucien Bonaparte Maxwell (September 14, 1818 - July 25, 1875) was a rancher and entrepreneur
Entrepreneur
An entrepreneur is an owner or manager of a business enterprise who makes money through risk and initiative.The term was originally a loanword from French and was first defined by the Irish-French economist Richard Cantillon. Entrepreneur in English is a term applied to a person who is willing to...
who at one point owned more than 1700000 acres (6,879.7 km²). Along with Thomas Catron and Ted Turner
Ted Turner
Robert Edward "Ted" Turner III is an American media mogul and philanthropist. As a businessman, he is known as founder of the cable news network CNN, the first dedicated 24-hour cable news channel. In addition, he founded WTBS, which pioneered the superstation concept in cable television...
, Maxwell was one of the largest private landowners in United States
United States
The United States of America is a federal constitutional republic comprising fifty states and a federal district...
history.

Maxwell was born in Kaskaskia, Illinois
Kaskaskia, Illinois
Kaskaskia is a village in Randolph County, Illinois, United States. In the 2010 census the population was 14, making it the second-smallest incorporated community in the State of Illinois in terms of population. A major French colonial town of the Illinois Country, its peak population was about...
. He traveled west in 1834 after the death of his father and encountered Kit Carson
Kit Carson
Christopher Houston "Kit" Carson was an American frontiersman and Indian fighter. Carson left home in rural present-day Missouri at age 16 and became a Mountain man and trapper in the West. Carson explored the west to California, and north through the Rocky Mountains. He lived among and married...
. Both were to sign up with John C. Frémont
John C. Frémont
John Charles Frémont , was an American military officer, explorer, and the first candidate of the anti-slavery Republican Party for the office of President of the United States. During the 1840s, that era's penny press accorded Frémont the sobriquet The Pathfinder...
in 1841 for western expeditions with Carson serving as guide and Maxwell chief hunter.

In 1844 he returned to Taos, New Mexico
Taos, New Mexico
Taos is a town in Taos County in the north-central region of New Mexico, incorporated in 1934. As of the 2000 census, its population was 4,700. Other nearby communities include Ranchos de Taos, Cañon, Taos Canyon, Ranchitos, and El Prado. The town is close to Taos Pueblo, the Native American...
, where he married Carlos Beaubien's daughter, Luz Beaubien. It was a dual wedding as Carson also married. In 1843 Beaubien and his partner, Guadalupe Miranda
Guadalupe Miranda
Guadalupe Miranda was a Mexican public official who was mayor of Ciudad Juárez and recipient of the Beaubien-Miranda Land Grant.-Early life:...
, had received a land grant of a million acres (4,000 km²) in northeast New Mexico
New Mexico
New Mexico is a state located in the southwest and western regions of the United States. New Mexico is also usually considered one of the Mountain States. With a population density of 16 per square mile, New Mexico is the sixth-most sparsely inhabited U.S...
. Beaubien's wedding gift to Maxwell was 15000 acres (60.7 km²).

In 1847, Maxwell was at Fort Bent
Bent's Old Fort National Historic Site
Bent's Old Fort is an 1833 fort located in Otero County in southeastern Colorado, USA. William and Charles Bent, along with Ceran St. Vrain, built the fort to trade with Southern Cheyenne and Arapaho Plains Indians and trappers for buffalo robes...
when Governor of New Mexico Charles Bent
Charles Bent
Charles Bent was appointed as the first Governor of the newly acquired New Mexico Territory by Governor Stephen Watts Kearny in September 1846....
was killed in the Taos Revolt
Taos Revolt
The Taos Revolt was a popular insurrection in January 1847 by Mexicans and Pueblo allies against the United States' occupation of present-day northern New Mexico during the Mexican–American War. In two short campaigns, United States troops and militia crushed the rebellion of the Mexicans and...
. Maxwell's wife survived but her brother (Beaubien's son), Narciso Beaubien was killed. Miranda was wounded and fled to Mexico
Mexico
The United Mexican States , commonly known as Mexico , is a federal constitutional republic in North America. It is bordered on the north by the United States; on the south and west by the Pacific Ocean; on the southeast by Guatemala, Belize, and the Caribbean Sea; and on the east by the Gulf of...
. Maxwell began more active management of the land grant.

In 1848 Maxwell survived an ambush while delivering supplies to a cabin on the Ponil River.

In 1849, at the conclusion of the Mexican-American War, Maxwell and Carson proposed building a fort on the Rayado River at Rayado, New Mexico, on the Santa Fe Trail
Santa Fe Trail
The Santa Fe Trail was a 19th-century transportation route through central North America that connected Missouri with Santa Fe, New Mexico. Pioneered in 1822 by William Becknell, it served as a vital commercial and military highway until the introduction of the railroad to Santa Fe in 1880...
. Maxwell built a large house and Carson had a smaller adobe
Adobe
Adobe is a natural building material made from sand, clay, water, and some kind of fibrous or organic material , which the builders shape into bricks using frames and dry in the sun. Adobe buildings are similar to cob and mudbrick buildings. Adobe structures are extremely durable, and account for...
hut.

In 1850 the Army moved its fort 30 miles (48.3 km) further south to Fort Union on the Mora River. Maxwell sold his Rayado property and moved to Cimarron, New Mexico
Cimarron, New Mexico
-Demographics:As of the census of 2000, there were 917 people, 382 households, and 255 families residing in the village. The population density was 479.5 people per square mile . There were 449 housing units at an average density of 234.8 per square mile...
, which was on the Cimarron River.

In 1858 Miranda, who was still in Mexico, sold his share of the 1000000 acres (4,046.9 km²) land to Maxwell for $2,745. After Beaubien died in 1864, Maxwell acquired much of the original estate that he had not inherited; his landholdings then peaked at 1714765 acres (6,939.4 km²). The entire area is referred to as the Maxwell Land Grant
Maxwell Land Grant
The Maxwell Land Grant, also known as the Beaubien-Miranda Land Grant, was a Mexican land grant in Colfax County, New Mexico and part of adjoining Las Animas County, Colorado. This land grant was one of the largest contiguous private landholdings in the history of the United States...
.

In 1870 he sold most of the land for $1,350,000 to a British company, which incorporated it under the name of the Maxwell Land Grant and Railway Company. A portion of the land was purchased by Matthew Lynch who became the father of placer mining in the region. 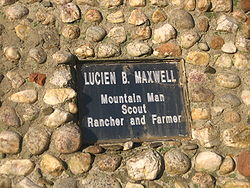 Maxwell moved to Fort Sumner
Fort Sumner
Fort Sumner was a military fort in De Baca County in southeastern New Mexico charged with the internment of Navajo and Mescalero Apache populations from 1863-1868 at nearby Bosque Redondo.-History:...
where he died and was buried in 1875.

After Maxwell sold the grant, the armed struggle between the new owners and squatters came to be known as the Colfax County War. Litigation over whether his land claims were legitimate would continue until 1887 when the United States Supreme Court approved a clear title.

Today, the land grant is broken into many private and public landholdings. These large private landholdings include the Philmont Scout Ranch
Philmont Scout Ranch
Philmont Scout Ranch is a large, rugged, mountainous ranch located near the town of Cimarron, New Mexico, covering approximately of wilderness in the Sangre de Cristo Mountains of the Rocky Mountains of northern New Mexico...
, Ted Turner
Ted Turner
Robert Edward "Ted" Turner III is an American media mogul and philanthropist. As a businessman, he is known as founder of the cable news network CNN, the first dedicated 24-hour cable news channel. In addition, he founded WTBS, which pioneered the superstation concept in cable television...
's Vermejo Park Ranch
Vermejo Park Ranch
The Vermejo Park Ranch is a ranch owned by Ted Turner in northeastern New Mexico and southern Colorado that is said to be the largest privately owned, contiguous tract of land in the United States....
, and the National Rifle Association
National Rifle Association
The National Rifle Association of America is an American non-profit 501 civil rights organization which advocates for the protection of the Second Amendment of the United States Bill of Rights and the promotion of firearm ownership rights as well as marksmanship, firearm safety, and the protection...
's Whittington Center.