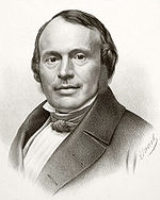 Overview
Jean Louis Rodolphe Agassiz (May 28, 1807 – December 14, 1873) was a Swiss paleontologist, glaciologist, geologist
Geologist
A geologist is a scientist who studies the solid and liquid matter that constitutes the Earth as well as the processes and history that has shaped it. Geologists usually engage in studying geology. Geologists, studying more of an applied science than a theoretical one, must approach Geology using...
and a prominent innovator in the study of the Earth's natural history
Natural history
Natural history is the scientific research of plants or animals, leaning more towards observational rather than experimental methods of study, and encompasses more research published in magazines than in academic journals. Grouped among the natural sciences, natural history is the systematic study...
. He grew up in Switzerland and became a professor of natural history at University of Neuchâtel
University of Neuchâtel
The University of Neuchâtel is a French-speaking university in Neuchâtel, Switzerland. The University has five faculties and more than a dozen institutes, including arts and human sciences, natural sciences, law, economics and theology. The Faculty of Arts and Human Sciences is the largest...
. Later, he accepted a professorship at Harvard University
Harvard University
Harvard University is a private Ivy League university located in Cambridge, Massachusetts, United States, established in 1636 by the Massachusetts legislature. Harvard is the oldest institution of higher learning in the United States and the first corporation chartered in the country...
in the United States.
Louis Agassiz was born in Môtier (now part of Haut-Vully
Haut-Vully
Haut-Vully is a municipality in the district of See in the canton of Fribourg in Switzerland. Until 1977, it was officially known as Vully-Le-Haut...
) in the canton of Fribourg
Canton of Fribourg
The Canton of Fribourg is a canton of Switzerland. It is located in the west of the country. The capital of the canton is Fribourg. The name Fribourg is French, whereas is the German name for both the canton and the town.-History:...
, Switzerland
Switzerland
Switzerland name of one of the Swiss cantons. ; ; ; or ), in its full name the Swiss Confederation , is a federal republic consisting of 26 cantons, with Bern as the seat of the federal authorities. The country is situated in Western Europe,Or Central Europe depending on the definition....
. Educated first at home, then spending four years of secondary school in Bienne, he completed his elementary studies in Lausanne
Lausanne
Lausanne is a city in Romandy, the French-speaking part of Switzerland, and is the capital of the canton of Vaud. The seat of the district of Lausanne, the city is situated on the shores of Lake Geneva . It faces the French town of Évian-les-Bains, with the Jura mountains to its north-west...
.

What conclusion did Louis Agassiz arrive at to explain sedimentary rock layers?
More

The eye of the trilobite tells us that the sun shone on the old beach where he lived; for there is nothing in nature without a purpose, and when so complicated an organ was made to receive light, there must have been light to enter it.

The facts will eventually test all our theories, and they form, after all, the only impartial jury to which we can appeal.

The world has arisen in some way or another. How it originated is the great question, and Charles Darwin|Darwin's theory, like all other attempts to explain the origin of life, is thus far merely conjectural. I believe he has not even made the best conjecture possible in the present state of our knowledge.