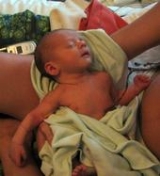 Encyclopedia
Lotus birth, or umbilical nonseverance, is the practice of leaving the umbilical cord
Umbilical cord
In placental mammals, the umbilical cord is the connecting cord from the developing embryo or fetus to the placenta...
attached to both the baby and the placenta
Placenta
The placenta is an organ that connects the developing fetus to the uterine wall to allow nutrient uptake, waste elimination, and gas exchange via the mother's blood supply. "True" placentas are a defining characteristic of eutherian or "placental" mammals, but are also found in some snakes and...
following birth, without clamping or severing, and allowing the cord the time to detach from the baby naturally. In this way the baby, cord and placenta are treated as a single unit until detachment occurs, generally two to three days after birth. 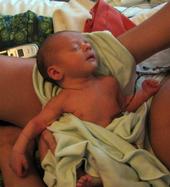 Immediately postpartum, the umbilical cord pulsates as it transfers blood to the placenta from the baby, and vice versa. Changes in the cord's Wharton's jelly
Wharton's jelly
Wharton's jelly is a gelatinous substance within the umbilical cord, largely made up of mucopolysaccharides . It also contains some fibroblasts and macrophages...
then produce a natural internal clamping within 10-20 minutes postpartum. Care providers immediately assign an Apgar score
Apgar score
The Apgar score was devised in 1952 by the eponymous Dr. Virginia Apgar as a simple and repeatable method to quickly and summarily assess the health of newborn children immediately after birth...
and proceed with any needed suctioning or stimulation, but usually postpone further procedures to allow the infant to start breastfeeding, and to have skin-to-skin contact with the mother. The infant, along with the umbilical cord and the placenta, is swaddled by the mother's arms, or held by the father or a nurse if maternal surgical suture is needed.

Excess fluids are wiped off the placenta, which is then placed in an open bowl or wrapped in permeable cloth and kept in close proximity to the newborn. Air is allowed to circulate around the placenta to dry it, and to avoid its becoming malodorous. Sea salt is often applied to the placenta to help dry it out. Sometimes essential oil
Essential oil
An essential oil is a concentrated hydrophobic liquid containing volatile aroma compounds from plants. Essential oils are also known as volatile oils, ethereal oils or aetherolea, or simply as the "oil of" the plant from which they were extracted, such as oil of clove...
s, such as lavender
Lavender
The lavenders are a genus of 39 species of flowering plants in the mint family, Lamiaceae. An Old World genus, distributed from Macaronesia across Africa, the Mediterranean, South-West Asia, Arabia, Western Iran and South-East India...
, or powdered herbs, such as goldenseal
Goldenseal
Goldenseal is a perennial herb in the buttercup family Ranunculaceae, native to southeastern Canada and the northeastern United States. It may be distinguished by its thick, yellow knotted rootstock. The stem is purplish and hairy above ground and yellow below ground where it connects to the...
or neem
Neem
Azadirachta indica is a tree in the mahogany family Meliaceae. It is one of two species in the genus Azadirachta, and is native to India growing in tropical and semi-tropical regions. Its fruits and seeds are the source of neem oil...
, are also applied to encourage drying, to help to neutralize the smell of decomposition, and for their antibacterial properties. If drying aids are not applied, the well-aired placenta will develop a distinct, musky scent which can be halted by directly planting it or by refrigerated storage after the first postpartum week.

The umbilical cord dries to sinew and after a few days naturally detaches from the umbilicus
Navel
The navel is a scar on the abdomen caused when the umbilical cord is removed from a newborn baby...
. As it dries it becomes stiff; parents thus take great care to move the baby and the cord as little as possible to avoid causing it to detach prematurely.

Lotus births are rarely practiced in hospitals, but are more common in birth centers and in home birth
Home birth
A home birth in developed countries is an attended or an unattended childbirth in a non-clinical setting, typically using natural childbirth methods, that takes place in a residence rather than in a hospital or a birth centre, and usually attended by a midwife or lay attendant with expertise in...
s.

Once the umbilical cord has stopped pulsating after birth, transfer of physical substances is complete. However, proponents of lotus births view the baby and the placenta as existing within the same auric field
Aura (paranormal)
In parapsychology and many forms of spiritual practice, an aura is a field of subtle, luminous radiation surrounding a person or object . The depiction of such an aura often connotes a person of particular power or holiness. Sometimes, however, it is said that all living things and all objects...
, with energy transfers continuing to take place gradually from the dead tissue of the placenta to the baby via the umbilical cord as the tissue of the placenta and umbilical cord dries out.

This approach stands in opposition to common medical training and practice in hospitals and global medical centers, which favours an active management of third-stage labour (the delivery of the placenta): administration of oxytocic drugs, immediate external clamping of the cord at birth, cutting it forthwith, then applying traction to the cord to speed the birth of the placenta . The cord blood may or may not be harvested for cord blood banking. The baby's umbilical cord and placenta are then disposed of as medical waste, or, with the mother’s consent, may be donated for research into pregnancy and pregnancy disorders. 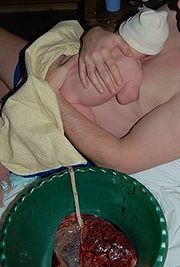 Primatologist Jane Goodall, who was the first person to conduct long-term studies of chimpanzees in the wild, reported that they did not chew or cut their offspring's cords, instead leaving the umbilicus intact. Because humans are closely related to chimpanzees, some lotus birth practitioners refer to chimpanzee practice as a natural practice for humans as well. However, great apes, including chimpanzees, have also been known to consume the placenta or abandon it altogether. (Since many cases of chimpanzee cord separation have also been documented, further studies are required.)

In Tibetan
Tibetan Buddhism
Tibetan Buddhism is the body of Buddhist religious doctrine and institutions characteristic of Tibet and certain regions of the Himalayas, including northern Nepal, Bhutan, and India . It is the state religion of Bhutan...
and Zen
Zen
Zen is a school of Mahāyāna Buddhism founded by the Buddhist monk Bodhidharma. The word Zen is from the Japanese pronunciation of the Chinese word Chán , which in turn is derived from the Sanskrit word dhyāna, which can be approximately translated as "meditation" or "meditative state."Zen...
Buddhism
Buddhism
Buddhism is a religion and philosophy encompassing a variety of traditions, beliefs and practices, largely based on teachings attributed to Siddhartha Gautama, commonly known as the Buddha . The Buddha lived and taught in the northeastern Indian subcontinent some time between the 6th and 4th...
, the term "lotus birth" is used to describe spiritual teachers such as Gautama Buddha
Gautama Buddha
Siddhārtha Gautama was a spiritual teacher from the Indian subcontinent, on whose teachings Buddhism was founded. In most Buddhist traditions, he is regarded as the Supreme Buddha Siddhārtha Gautama (Sanskrit: सिद्धार्थ गौतम; Pali: Siddhattha Gotama) was a spiritual teacher from the Indian...
and Padmasambhava
Padmasambhava
Padmasambhava ; Mongolian ловон Бадмажунай, lovon Badmajunai, , Means The Lotus-Born, was a sage guru from Oddiyāna who is said to have transmitted Vajrayana Buddhism to Bhutan and Tibet and neighbouring countries in the 8th century...
(Lien-hua Sen), emphasizing their entrance into the world as intact, holy children. References to lotus births are also found in Hinduism
Hinduism
Hinduism is the predominant and indigenous religious tradition of the Indian Subcontinent. Hinduism is known to its followers as , amongst many other expressions...
, for example in the story of the birth of Vishnu
Vishnu
Vishnu is the Supreme god in the Vaishnavite tradition of Hinduism. Smarta followers of Adi Shankara, among others, venerate Vishnu as one of the five primary forms of God....
.

Although recently arisen as an alternative birth phenomenon in the West, delayed umbilical severance and umbilical nonseverance have been recorded in a number of cultures including that of the Balinese
Bali
Bali is an Indonesian island located in the westernmost end of the Lesser Sunda Islands, lying between Java to the west and Lombok to the east...
and of some aboriginal peoples such as the !Kung
!Kung
ǃKung, also spelled !Xun, may refer to:* ǃKung people* ǃKung languageSee also ǃXu ....
.

Early American pioneers, in written diaries and letters, reported practicing nonseverance of the umbilicus as a preventative measure to protect the infant from an open wound infection.

The practice gained notice in the yoga
Yoga
Yoga is a physical, mental, and spiritual discipline, originating in ancient India. The goal of yoga, or of the person practicing yoga, is the attainment of a state of perfect spiritual insight and tranquility while meditating on Supersoul...
practitioner community when Jeannine Parvati Baker
Jeannine Parvati Baker
Jeannine Parvati Baker was a Yogini, midwife, herbalist, published author, and poet. She was also an international activist on the matters of homebirth, unassisted childbirth and newborn rights issues.-Biography:...
, author of the first book on prenatal yoga in the West, Prenatal Yoga & Natural Childbirth, practiced umbilical nonseverance for two of her own births, seeing it as a practical application of the yogic value of ahimsa
Ahimsa
Ahimsa is a term meaning to do no harm . The word is derived from the Sanskrit root hims – to strike; himsa is injury or harm, a-himsa is the opposite of this, i.e. non harming or nonviolence. It is an important tenet of the Indian religions...
as well as the core yoga teaching inherent in the primal bonding process that "all attachments will fall away of their own accord."

In the 1990s, Sarah Buckley MD, an Australian family physician and noted parenting advisor for the magazine Mothering, published her personal birth stories in the text Lotus Birth; she has produced numerous scholarly publications of her research on the physiological benefits of passive management of third-stage labor.

Umbilical nonseverance is an informed choice option currently practiced by a minority of homebirth and hospital birth families (see the research of Sarah Buckley, M.D. and international midwife Robin Lim), and an increasingly popular continuing education topic for licensed midwives and certified nurse midwives in publications such as the magazines Midwifery Today and Mothering. Particularly compelling to these professionals is the reported absence of healthy neonatal weight loss and breastfeeding jaundice in lotus birth scenarios; studies of this correlation have indicated a significantly decreased risk of jaundice in infants where the umbilical cord is clamped later than 60 seconds after birth.