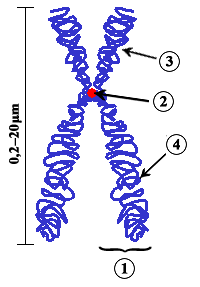 In the fields of genetics and genetic computation, a locus (plural loci) is the specific location of a gene
Gene
A gene is a molecular unit of heredity of a living organism. It is a name given to some stretches of DNA and RNA that code for a type of protein or for an RNA chain that has a function in the organism. Living beings depend on genes, as they specify all proteins and functional RNA chains...
or DNA sequence
DNA sequence
The sequence or primary structure of a nucleic acid is the composition of atoms that make up the nucleic acid and the chemical bonds that bond those atoms. Because nucleic acids, such as DNA and RNA, are unbranched polymers, this specification is equivalent to specifying the sequence of...
on a chromosome
Chromosome
A chromosome is an organized structure of DNA and protein found in cells. It is a single piece of coiled DNA containing many genes, regulatory elements and other nucleotide sequences. Chromosomes also contain DNA-bound proteins, which serve to package the DNA and control its functions.Chromosomes...
. A variant of the DNA sequence at a given locus is called an allele
Allele
An allele is one of two or more forms of a gene or a genetic locus . "Allel" is an abbreviation of allelomorph. Sometimes, different alleles can result in different observable phenotypic traits, such as different pigmentation...
. The ordered list of loci known for a particular genome
Genome
In modern molecular biology and genetics, the genome is the entirety of an organism's hereditary information. It is encoded either in DNA or, for many types of virus, in RNA. The genome includes both the genes and the non-coding sequences of the DNA/RNA....
is called a genetic map. Gene mapping
Gene mapping
Gene mapping, also called genome mapping, is the creation of a genetic map assigning DNA fragments to chromosomes.When a genome is first investigated, this map is nonexistent. The map improves with the scientific progress and is perfect when the genomic DNA sequencing of the species has been...
is the procession of determining the locus for a particular biological trait.

A range of locales is specified in a similar way. For example, the locus of gene OCA1
OCA1
Oculocutaneous Albinism Type I or –Type 1A is an autosomal recessive skin disease associated with albinism. This type of albinism is caused when the gene OCA1 does not function properly....
may be written "11q1.4-q2.1", meaning it is on the long arm of chromosome 11, some where in the range from sub-band 4 of band 1, and sub-band 1 of band 2.

The ends of a chromosome are labeled "pter" and "qter", and so "2qter" refers to the telomere
Telomere
A telomere is a region of repetitive DNA sequences at the end of a chromosome, which protects the end of the chromosome from deterioration or from fusion with neighboring chromosomes. Its name is derived from the Greek nouns telos "end" and merοs "part"...
of the long arm of chromosome 2.