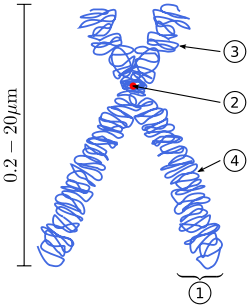 A centromere is a region of DNA
DNA
Deoxyribonucleic acid is a nucleic acid that contains the genetic instructions used in the development and functioning of all known living organisms . The DNA segments that carry this genetic information are called genes, but other DNA sequences have structural purposes, or are involved in...
typically found near the middle of a chromosome
Chromosome
A chromosome is an organized structure of DNA and protein found in cells. It is a single piece of coiled DNA containing many genes, regulatory elements and other nucleotide sequences. Chromosomes also contain DNA-bound proteins, which serve to package the DNA and control its functions.Chromosomes...
where two identical sister chromatids
Sister chromatids
Sister chromatids are two identical copies of a chromatid connected by a centromere. Compare sister chromatids to homologous chromosomes, which are the two different copies of the same chromosome that diploid organisms inherit, one from each parent...
come closest in contact. It is involved in cell division
Cell division
Cell division is the process by which a parent cell divides into two or more daughter cells . Cell division is usually a small segment of a larger cell cycle. This type of cell division in eukaryotes is known as mitosis, and leaves the daughter cell capable of dividing again. The corresponding sort...
as the point of mitotic spindle
Mitotic spindle
In cell biology, the spindle fibers are the structure that separates the chromosomes into the daughter cells during cell division. It is part of the cytoskeleton in eukaryotic cells...
attachment. The sister chromatids are attached all along their length, but they are closest at the centromere.

Each chromosome has two arms, labeled p (the shorter of the two) and q (the longer). The p arm is named for "petit" meaning 'small'; the q arm is named q simply because it follows p in the alphabet. (According to the NCBI, "q" refers to the French word "queue" meaning 'tail'.) They can be connected in either metacentric, submetacentric, acrocentric or telocentric manner.

If arms' lengths are unequal, the chromosome is said to be submetacentric.

In an acrocentric chromosome the p arm contains genetic material including repeated sequences such as nucleolar organizing regions, and can be translocated without significant harm, as in a balanced Robertsonian translocation
Robertsonian translocation
Robertsonian translocation is a common form of chromosomal rearrangement that in humans occurs in the five acrocentric chromosome pairs, namely 13, 14, 15, 21, and 22. Other translocations occur but do not lead to a viable fetus. They are named after the American biologist William Rees Brebner...
. The domestic horse
Horse
The horse is one of two extant subspecies of Equus ferus, or the wild horse. It is a single-hooved mammal belonging to the taxonomic family Equidae. The horse has evolved over the past 45 to 55 million years from a small multi-toed creature into the large, single-toed animal of today...
genome includes one metacentric chromosome that is homologous
Homology (biology)
Homology forms the basis of organization for comparative biology. In 1843, Richard Owen defined homology as "the same organ in different animals under every variety of form and function". Organs as different as a bat's wing, a seal's flipper, a cat's paw and a human hand have a common underlying...
to two acrocentric chromosomes in the conspecific
Conspecificity
Conspecificity is a concept in biology. Two or more individual organisms, populations, or taxa are conspecific if they belong to the same species....
but undomesticated Przewalski's horse
Przewalski's Horse
Przewalski's Horse or Dzungarian Horse, is a rare and endangered subspecies of wild horse native to the steppes of central Asia, specifically China and Mongolia.At one time extinct in the wild, it has been reintroduced to its native habitat in Mongolia at the Khustain Nuruu...
. This may reflect either fixation of a balanced Robertsonian translocation in domestic horses or, conversely, fixation of the fission of one metacentric chromosome into two acrocentric chromosomes in Przewalski's horses. A similar situation exists between the human and great ape genomes; in this case, because more species are extant, it is apparent that the evolutionary sequence is a reduction of two acrocentric chromosomes in the great apes to one metacentric chromosome in humans (see Karyotype#Historical note).

If the chromosome's centromere is located closer to its end than to its center, it may be described as subtelocentric.

There are two types of centromeres. In regional centromeres, DNA
DNA
Deoxyribonucleic acid is a nucleic acid that contains the genetic instructions used in the development and functioning of all known living organisms . The DNA segments that carry this genetic information are called genes, but other DNA sequences have structural purposes, or are involved in...
sequences contribute to but do not define function. Regional centromeres contain large amounts of DNA and are often packaged into heterochromatin
Heterochromatin
Heterochromatin is a tightly packed form of DNA, which comes in different varieties. These varieties lie on a continuum between the two extremes of constitutive and facultative heterochromatin...
. In most eukaryotes, the centromere has no defined DNA sequence
DNA sequence
The sequence or primary structure of a nucleic acid is the composition of atoms that make up the nucleic acid and the chemical bonds that bond those atoms. Because nucleic acids, such as DNA and RNA, are unbranched polymers, this specification is equivalent to specifying the sequence of...
. It typically consists of large arrays of repetitive DNA (e.g. satellite DNA
Satellite DNA
Satellite DNA consists of very large arrays of tandemly repeating, non-coding DNA. Satellite DNA is the main component of functional centromeres, and form the main structural constituent of heterochromatin....
) where the sequence within individual repeat elements is similar but not identical. In humans, the primary centromeric repeat unit is called α-satellite (or alphoid), although a number of other sequence types are found in this region.

Point centromeres are smaller and more compact. DNA sequences are both necessary and sufficient to specify centromere identity and function in organisms with point centromeres. In budding yeasts, the centromere region is relatively small (about 125 bp DNA) and contains two highly conserved DNA sequences that serve as binding sites for essential kinetochore
Kinetochore
The kinetochore is the protein structure on chromatids where the spindle fibers attach during cell division to pull sister chromatids apart....
proteins.

The centromeric DNA is normally in a heterochromatin
Heterochromatin
Heterochromatin is a tightly packed form of DNA, which comes in different varieties. These varieties lie on a continuum between the two extremes of constitutive and facultative heterochromatin...
state, which is essential for the recruitment of the cohesin
Cohesin
Cohesin is a protein complex that regulates the separation of sister chromatids during cell division, either mitosis or meiosis.- Structure :...
complex that mediates sister chromatid cohesion after DNA replication as well as coordinating sister chromatid separation during anaphase. In this chromatin, the normal histone
Histone
In biology, histones are highly alkaline proteins found in eukaryotic cell nuclei that package and order the DNA into structural units called nucleosomes. They are the chief protein components of chromatin, acting as spools around which DNA winds, and play a role in gene regulation...
H3 is replaced with a centromere-specific variant, CENP-A in humans. The presence of CENP-A is believed to be important for the assembly of the kinetochore on the centromere. CENP-C has been shown to localise almost exclusively to these regions of CENP-A associated chromatin. In human cells, the histones are found to be most enriched for H4K20me3 and H3K9me3 which are known heterochromatic modifications.

In the yeast Schizosaccharomyces pombe
Schizosaccharomyces pombe
Schizosaccharomyces pombe, also called "fission yeast", is a species of yeast. It is used as a model organism in molecular and cell biology. It is a unicellular eukaryote, whose cells are rod-shaped. Cells typically measure 3 to 4 micrometres in diameter and 7 to 14 micrometres in length...
(and probably in other eukaryotes), the formation of centromeric heterochromatin is connected to RNAi
RNAI
RNAI is a non-coding RNA that is an antisense repressor of the replication of some E. coli plasmids, including ColE1. Plasmid replication is usually initiated by RNAII, which acts as a primer by binding to its template DNA. The complementary RNAI binds RNAII prohibiting it from its initiation role...
. In nematodes such as Caenorhabditis elegans
Caenorhabditis elegans
Caenorhabditis elegans is a free-living, transparent nematode , about 1 mm in length, which lives in temperate soil environments. Research into the molecular and developmental biology of C. elegans was begun in 1974 by Sydney Brenner and it has since been used extensively as a model...
, some plants, and the insect orders Lepidoptera and Hemiptera, chromosomes are "holocentric", indicating that there is not a primary site of microtubule attachments or a primary constriction, and a "diffuse" kinetochore assembles along the entire length of the chromosome.