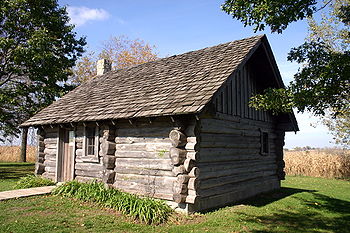 The Little House Wayside is a 3 acres (12,140.6 m²) rest area
Rest area
A rest area, travel plaza, rest stop, or service area is a public facility, located next to a large thoroughfare such as a highway, expressway, or freeway at which drivers and passengers can rest, eat, or refuel without exiting on to secondary roads...
located in Pepin County, Wisconsin approximate seven miles (11 km) northwest of Pepin, Wisconsin
Pepin, Wisconsin
Pepin is a village in Pepin County, Wisconsin, United States. The population was 837 at the 2010 census. The village is located within the Town of Pepin.-History:...
, in the town of Pepin
Pepin (town), Wisconsin
Pepin is a town in Pepin County, Wisconsin, United States. The population was 580 at the 2000 census. The unincorporated communities of Barry Corner, Devils Corners, Hawkins Corners, and Lakeport are located in the town...
, and approximately one mile southeast of Lund
Lund, Wisconsin
Lund is an unincorporated community located in two counties of the U.S. state of Wisconsin. It lies on the county line between Pepin County, in the town of Pepin, and Pierce County, in the town of Maiden Rock, in central western Wisconsin, along the junctions of county highways "SS", "CC" , and "J"...
, on County Highway CC (formerly Wisconsin Highway 183
Wisconsin Highway 183
State Trunk Highway 183 was a state highway in the U.S. state of Wisconsin. It ran north–south between WIS 35 near Pepin and WIS 29 near Spring Valley. The now-decommissioned highway was turned over to local control, and is now designated as County Trunk Highway "CC" in Pepin and Pierce...
), on the plot where Laura Ingalls Wilder
Laura Ingalls Wilder
Laura Elizabeth Ingalls Wilder was an American author who wrote the Little House series of books based on her childhood in a pioneer family...
was born on February 7, 1867.