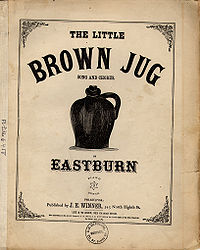 It was originally a drinking song
Drinking song
A drinking song is a song sung while drinking alcohol. Most drinking songs are folk songs, and may be varied from person to person and region to region, in both the lyrics and in the music...
. It remained well known as a folk song into the early 20th century. Like many songs which make reference to alcoholic beverages, it enjoyed new popularity during the Prohibition
Prohibition
Prohibition of alcohol, often referred to simply as prohibition, is the practice of prohibiting the manufacture, transportation, import, export, sale, and consumption of alcohol and alcoholic beverages. The term can also apply to the periods in the histories of the countries during which the...
era. In 1939, bandleader Glenn Miller
Glenn Miller
Alton Glenn Miller was an American jazz musician , arranger, composer, and bandleader in the swing era. He was one of the best-selling recording artists from 1939 to 1943, leading one of the best known "Big Bands"...
recorded and broadcast his swing instrumental arrangement of the tune with great success, and the number became one of the best known orchestrations of the American Big Band
Big band
A big band is a type of musical ensemble associated with jazz and the Swing Era typically consisting of rhythm, brass, and woodwind instruments totaling approximately twelve to twenty-five musicians...
era. His version did not have the lyrics.
Kate Bush
Kate Bush
Kate Bush is an English singer-songwriter, musician and record producer. Her eclectic musical style and idiosyncratic vocal style have made her one of the United Kingdom's most successful solo female performers of the past 30 years.In 1978, at the age of 19, Bush topped the UK Singles Chart...
quoted the famous verse "Little Brown Jug, don't I love thee" in the song "A Coral Room" in her album Aerial
Aerial (album)
Aerial is the eighth studio album by British singer-songwriter and musician Kate Bush.-Overview:Aerial is Bush's first double album, and was released after a twelve year absence from the music industry during which Bush devoted her time to family and the rearing of her son, Bertie...
.

The song's lyrics are about a man and his wife and their hard life due to alcoholism
Alcoholism
Alcoholism is a broad term for problems with alcohol, and is generally used to mean compulsive and uncontrolled consumption of alcoholic beverages, usually to the detriment of the drinker's health, personal relationships, and social standing...
; however, the tone and tune are bright and cheerful.

Me and my wife live all alone
In a little log hut we call our own;
She loves gin
Gin
Gin is a spirit which derives its predominant flavour from juniper berries . Although several different styles of gin have existed since its origins, it is broadly differentiated into two basic legal categories...
and I love rum
Rum
Rum is a distilled alcoholic beverage made from sugarcane by-products such as molasses, or directly from sugarcane juice, by a process of fermentation and distillation. The distillate, a clear liquid, is then usually aged in oak barrels...
,
And don't we have a lot of fun!

When I go toiling on the farm
I take the little jug under my arm;
Place it under a shady tree,
Little brown jug, 'tis you and me.


If all the folks in Adam's race
Were gathered together in one place,
I'd let them go without a tear
Before I'd part from you, my dear.


If I'd a cow that gave such milk,
I'd dress her in the finest silk;
Feed her up on oats and hay,
And milk her twenty times a day.


I bought a cow from Farmer Jones,
And she was nothing but skin and bones;
I fed her up as fine as silk,
She jumped the fence and strained her milk.


And when I die don't bury me at all,
Just pickle my bones in alcohol;
Put a bottle o' booze at my head and feet
And then I know that I will keep.


The rose is red, my nose is too,
The violet's blue and so are you;
And yet, I guess, before I stop,
We'd better take another drop.

As a children's song, the lyrics are often changed. Sometimes a verse is modified to fit the melody and rhythm of the tune:

I got a dog, he's a hound,
Always diggin' in the ground.
Every time I hide my jug,
That's just where that ole hound dug.

Me, my wife, and a bobtailed dog,
crossed a creek on a hollow log,
the log, it broke, and we fell in,
and little brown jug got filled again.

Me, my wife, and my lil brown jug,
went to cross a hickory log,
log it broke and we fell in,
lost my wife but I saved my gin.

Most notably, the chorus is often sung alone as the entire song:

My wife and I drink lots of pop,
Sometimes it seems we seldom stop,
She drinks from a fancy mug,
But I prefer my li'l brown jug.

My wife and I drink lots of pop
Sometimes it seem we seldom stop
She drinks from a fancy mug
But I prefer my li'l brown jug.