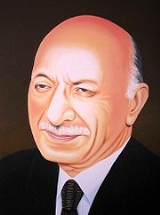 Encyclopedia
Prior to the 18th century, the modern state of Afghanistan
Afghanistan
Afghanistan , officially the Islamic Republic of Afghanistan, is a landlocked country located in the centre of Asia, forming South Asia, Central Asia and the Middle East. With a population of about 29 million, it has an area of , making it the 42nd most populous and 41st largest nation in the world...
was divided and mostly ruled by the Delhi Sultanate
Delhi Sultanate
The Delhi Sultanate is a term used to cover five short-lived, Delhi based kingdoms or sultanates, of Turkic origin in medieval India. The sultanates ruled from Delhi between 1206 and 1526, when the last was replaced by the Mughal dynasty...
of India
India
India , officially the Republic of India , is a country in South Asia. It is the seventh-largest country by geographical area, the second-most populous country with over 1.2 billion people, and the most populous democracy in the world...
. Its Herat
Herat
Herāt is the capital of Herat province in Afghanistan. It is the third largest city of Afghanistan, with a population of about 397,456 as of 2006. It is situated in the valley of the Hari River, which flows from the mountains of central Afghanistan to the Karakum Desert in Turkmenistan...
region in the west was ruled by the Safavids
Safavid dynasty
The Safavid dynasty was one of the most significant ruling dynasties of Iran. They ruled one of the greatest Persian empires since the Muslim conquest of Persia and established the Twelver school of Shi'a Islam as the official religion of their empire, marking one of the most important turning...
of Persia
Iran
Iran , officially the Islamic Republic of Iran , is a country in Southern and Western Asia. The name "Iran" has been in use natively since the Sassanian era and came into use internationally in 1935, before which the country was known to the Western world as Persia...
and the Mazar-i-Sharif area in the north by the Khanate of Bukhara
Khanate of Bukhara
Khanate of Bukhara was a significant state in Central Asia from the second quarter of 16th century to the late–18th century. Bukhara became the capital of the short-lived Shaybanid empire during the reign of Ubaydallah Khan . The khanate reached its greatest extent and influence under its...
. The southern Kandahar
Kandahar
Kandahar is the second largest city in Afghanistan, with a population of about 512,200 as of 2011. It is the capital of Kandahar Province, located in the south of the country at about 1,005 m above sea level...
region occasionally switched sides between the Mughal Empire
Mughal Empire
The Mughal Empire ,‎ or Mogul Empire in traditional English usage, was an imperial power from the Indian Subcontinent. The Mughal emperors were descendants of the Timurids...
and the Safavids. The native Afghans (Pashtun people
Pashtun people
Pashtuns or Pathans , also known as ethnic Afghans , are an Eastern Iranic ethnic group with populations primarily between the Hindu Kush mountains in Afghanistan and the Indus River in Pakistan...
) had been oppressed by both sides, and were pushing for independence
Independence
Independence is a condition of a nation, country, or state in which its residents and population, or some portion thereof, exercise self-government, and usually sovereignty, over its territory....
but many attempts had been crushed and those accused of starting revolution
Revolution
A revolution is a fundamental change in power or organizational structures that takes place in a relatively short period of time.Aristotle described two types of political revolution:...
being executed.

In 1709, Mirwais Hotak and his Afghan tribal chiefs from Kandahar organized themselves and successfully freed their land from Persian rule. Mirwais built a large fortress for himself and turned the town of Kandahar to serve as the capital
Capital City
Capital City was a television show produced by Euston Films which focused on the lives of investment bankers in London living and working on the corporate trading floor for the fictional international bank Shane-Longman....
of the Hotaki Empire. After a long series of wars, this empire was eventually replaced by the Durrani
Durrani
Durrani or Abdali is the name of a chief Pashtun tribal confederation in Afghanistan and Pakistan. Originally known by their ancient name Abdali later as Durrani they have been called Durrani since the beginning of the Durrani Empire in 1747. The number of Durranis are estimated to be roughly 16%...
Afghan Empire
Durrani Empire
The Durrani Empire was a Pashtun dynasty centered in Afghanistan and included northeastern Iran, the Kashmir region, the modern state of Pakistan, and northwestern India. It was established at Kandahar in 1747 by Ahmad Shah Durrani, an Afghan military commander under Nader Shah of Persia and chief...
that was founded by Ahmad Shah Durrani
Ahmad Shah Durrani
Ahmad Shah Durrani , also known as Ahmad Shāh Abdālī and born as Ahmad Khān, was the founder of the Durrani Empire in 1747 and is regarded by many to be the founder of the modern state of Afghanistan.Ahmad Khan enlisted as a young soldier in the military of the Afsharid kingdom and quickly rose...
in 1747. Ahmad Shah Durrani is regarded as the "Father of the Nation
Father of the Nation
Father of the Nation is an honorific title given to a man considered the driving force behind the establishment of their country, state or nation...
", Mirwais Hotak as the "Grand father" and Mohammed Zahir Shah
Mohammed Zahir Shah
Mohammed Zahir Shah was the last King of Afghanistan, reigning for four decades, from 1933 until he was ousted by a coup in 1973...
as the last King of Afghanistan.