This is the year 2000 list of countries of the world sorted by the total English-speaking population in that country
Country
A country is a region legally identified as a distinct entity in political geography. A country may be an independent sovereign state or one that is occupied by another state, as a non-sovereign or formerly sovereign political division, or a geographic region associated with a previously...
. This includes both native speaker
First language
A first language is the language a person has learned from birth or within the critical period, or that a person speaks the best and so is often the basis for sociolinguistic identity...
s and second-language
Second language
A second language or L2 is any language learned after the first language or mother tongue. Some languages, often called auxiliary languages, are used primarily as second languages or lingua francas ....
speakers of English
English language
English is a West Germanic language that arose in the Anglo-Saxon kingdoms of England and spread into what was to become south-east Scotland under the influence of the Anglian medieval kingdom of Northumbria...
.

Statistics on second language speakers are usually imprecise, in part because there is no widely agreed definition of second language speakers - there is no differentiation between countries where English is the lingua franca
Lingua franca
A lingua franca is a language systematically used to make communication possible between people not sharing a mother tongue, in particular when it is a third language, distinct from both mother tongues.-Characteristics:"Lingua franca" is a functionally defined term, independent of the linguistic...
and those where it is not.

Moreover, some numbers have been calculated by Wikipedia editors from data in other sources, so these figures are imprecise and should be treated with great caution.

The degree of caution needed can be put into perspective by noting that the English-language newspaper with the highest daily circulation is the Times of India (3.24 million) even though India only has a quarter of a million people who use English as a mother tongue.


The European Union
European Union
The European Union is an economic and political union of 27 independent member states which are located primarily in Europe. The EU traces its origins from the European Coal and Steel Community and the European Economic Community , formed by six countries in 1958...
is a supranational union composed of 27 member states. The combined total English speaking population is 229,850,000 (out of a total population of 500,000,000 – 46%) including 61,850,000 native speakers and 168,000,000 non-native speakers, and would be ranked 2nd if it were included. 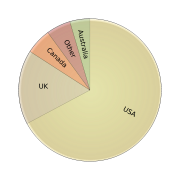