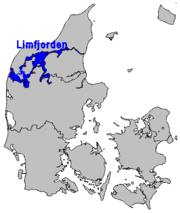 The Limfjord is a shallow sound
Sound (geography)
In geography a sound or seaway is a large sea or ocean inlet larger than a bay, deeper than a bight and wider than a fjord; or it may be defined as a narrow sea or ocean channel between two bodies of land ....
in Denmark
Denmark
Denmark is a Scandinavian country in Northern Europe. The countries of Denmark and Greenland, as well as the Faroe Islands, constitute the Kingdom of Denmark . It is the southernmost of the Nordic countries, southwest of Sweden and south of Norway, and bordered to the south by Germany. Denmark...
that separates the island of Vendsyssel-Thy
Vendsyssel-Thy
The North Jutlandic Island , Vendsyssel-Thy, or simply Jutland north of the Limfjord are lesser-used names for the northernmost part of Denmark and of Jutland. It is more common to refer to the three traditional districts Vendsyssel, Hanherred and Thy...
from the rest of the Jutland Peninsula
Jutland Peninsula
The Jutland Peninsula or more historically the Cimbrian Peninsula is a peninsula in Europe, divided between Denmark and Germany. The names are derived from the Jutes and the Cimbri....
. It extends from Thyborøn Channel on the North Sea
North Sea
In the southwest, beyond the Straits of Dover, the North Sea becomes the English Channel connecting to the Atlantic Ocean. In the east, it connects to the Baltic Sea via the Skagerrak and Kattegat, narrow straits that separate Denmark from Norway and Sweden respectively...
to Hals
Hals Municipality
Hals Municipality ceased to exist on January 1, 2007, due to Kommunalreformen It was located in North Jutland County. The municipality covered an area of 191 km², and had a total population of 11,448 . Its last mayor was Bent Sørensen, a member of the Social Democrats political party...
on the Kattegat
Kattegat
The Kattegat , or Kattegatt is a sea area bounded by the Jutland peninsula and the Straits islands of Denmark on the west and south, and the provinces of Västergötland, Scania, Halland and Bohuslän in Sweden on the east. The Baltic Sea drains into the Kattegat through the Øresund and the Danish...
. It is approximately 180 kilometres long and of an irregular shape with several bays, narrowings, and islands, most notably Mors
Mors (island)
Mors or Morsø is a 367.7 km2 land locked island in the shallow sound called Limfjorden in Denmark. As of 1 January 2010, it has a population of 21,800. The main town on the island is called Nykøbing Mors. Geologically Mors is unique...
. It is deepest at Hvalpsund (24 metres). Its main port is Aalborg
Aalborg
-Transport:On the north side of the Limfjord is Nørresundby, which is connected to Aalborg by a road bridge Limfjordsbroen, an iron railway bridge Jernbanebroen over Limfjorden, as well as a motorway tunnel running under the Limfjord Limfjordstunnelen....
, where a railway and a road bridge are built across Limfjorden to Nørresundby, while motorway E45 passes it through a tunnel to the east.
Limfjorden was originally connected with the North Sea. Canute the Great
Canute the Great
Cnut the Great , also known as Canute, was a king of Denmark, England, Norway and parts of Sweden. Though after the death of his heirs within a decade of his own and the Norman conquest of England in 1066, his legacy was largely lost to history, historian Norman F...
sailed into it in 1027 on his way back from England. According to Saxo Grammaticus
Saxo Grammaticus
Saxo Grammaticus also known as Saxo cognomine Longus was a Danish historian, thought to have been a secular clerk or secretary to Absalon, Archbishop of Lund, foremost advisor to Valdemar I of Denmark. He is the author of the first full history of Denmark.- Life :The Jutland Chronicle gives...
it closed at some time around 1200. On February 3, 1825 a flood pierced an opening, the so-called Agger Channel, in the north of the 13 km long and less than 1 km wide isthmus
Isthmus
An isthmus is a narrow strip of land connecting two larger land areas usually with waterforms on either side.Canals are often built through isthmuses where they may be particularly advantageous to create a shortcut for marine transportation...
, the Agger Tange, which had until then linked Vendsyssel-Thy with the rest of Jutland
Jutland
Jutland , historically also called Cimbria, is the name of the peninsula that juts out in Northern Europe toward the rest of Scandinavia, forming the mainland part of Denmark. It has the North Sea to its west, Kattegat and Skagerrak to its north, the Baltic Sea to its east, and the Danish–German...
.
In 1862, another flood pierced another opening, the Thyborøn Channel, through the remainder of Agger Tange (see satellite image). Agger Channel was continuously filling with sand, and was eventually closed in 1877.

Limfjorden is notable for its tasty mussels
Blue mussel
The blue mussel, Mytilus edulis, is a medium-sized edible marine bivalve mollusc in the family Mytilidae. In spite of its specific name edulis, it is not the sole edible Mytilus species.-Distribution:...
(Mytilus edulis) http://www.nioo.knaw.nl/projects/mabene/page/workplan/. Gourmets appreciate its oysters which are considered to be of extraordinary size and quality.