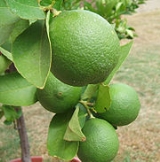 Overview
Lime is a term referring to a number of different citrus
Citrus
Citrus is a common term and genus of flowering plants in the rue family, Rutaceae. Citrus is believed to have originated in the part of Southeast Asia bordered by Northeastern India, Myanmar and the Yunnan province of China...
fruits, both species
Species
In biology, a species is one of the basic units of biological classification and a taxonomic rank. A species is often defined as a group of organisms capable of interbreeding and producing fertile offspring. While in many cases this definition is adequate, more precise or differing measures are...
and hybrids, which are typically round, green to yellow in color, 3–6 cm in diameter
Diameter
In geometry, a diameter of a circle is any straight line segment that passes through the center of the circle and whose endpoints are on the circle. The diameters are the longest chords of the circle...
, and containing sour and acidic pulp
Juice vesicles
The juice vesicles of a citrus fruit are the membranous content of the fruit’s endocarp. The vesicles contain the juice of the fruit. The pulp is usually removed from the juice by filtering it out...
. Limes are a good source of vitamin C
Vitamin C
Vitamin C or L-ascorbic acid or L-ascorbate is an essential nutrient for humans and certain other animal species. In living organisms ascorbate acts as an antioxidant by protecting the body against oxidative stress...
. Limes are often used to accent the flavors of foods and beverages. Limes are grown all year round and are usually smaller and more sour than lemons.
In cooking
Cooking
Cooking is the process of preparing food by use of heat. Cooking techniques and ingredients vary widely across the world, reflecting unique environmental, economic, and cultural traditions. Cooks themselves also vary widely in skill and training...
, lime is valued both for the acidity of its juice and the floral aroma of its zest
Zest (ingredient)
Zest is a food ingredient that is prepared by scraping or cutting from the outer, colorful skin of citrus fruits such as lemon, orange, citron, and lime. Zest is used to add flavor to foods....
.