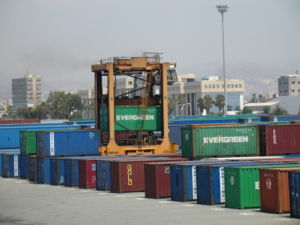 Although a title held by Famagusta Port for centuries, Limassol Port has now become the principal seaport in Cyprus
Cyprus
Cyprus , officially the Republic of Cyprus , is a Eurasian island country, member of the European Union, in the Eastern Mediterranean, east of Greece, south of Turkey, west of Syria and north of Egypt. It is the third largest island in the Mediterranean Sea.The earliest known human activity on the...
. This was largely a direct result of the Turkish invasion of Cyprus
Turkish invasion of Cyprus
The Turkish invasion of Cyprus, launched on 20 July 1974, was a Turkish military invasion in response to a Greek military junta backed coup in Cyprus...
in 1974 leaving the port of Famagusta within occupied territory and inaccessible to Greek
Greece
Greece , officially the Hellenic Republic , and historically Hellas or the Republic of Greece in English, is a country in southeastern Europe....
Cypriots. The port is the largest and busiest harbour on the island, capable of handling vessels up to 820 ft (249.9 m) size for berthing in 45 ft (13.7 m) of water. It is entered through an approach channel which is 49 ft (14.9 m) deep and 492 ft (150 m) wide between the ends of two breakwaters.

With Cyprus an established player in the shipping industry, Limassol and its new port have accumulated importance over time and now is a centre for numerous shipping companies. Most of the island’s cargo (importation and exportation) is handled here. In the year 2000, 3,589,000 tonnes of cargo were handled whilst there were roughly 1 million passenger arrival and departures (>90% of total traffic). Over 50 international cruise liners include Cyprus in their Mediterranean routes resulting in much of that passenger traffic.

Time and again the port has served as the evacuation point for refugee
Refugee
A refugee is a person who outside her country of origin or habitual residence because she has suffered persecution on account of race, religion, nationality, political opinion, or because she is a member of a persecuted 'social group'. Such a person may be referred to as an 'asylum seeker' until...
s fleeing conflicts in the Middle East
Middle East
The Middle East is a region that encompasses Western Asia and Northern Africa. It is often used as a synonym for Near East, in opposition to Far East...
. Most recently hundreds of thousands of EU
European Union
The European Union is an economic and political union of 27 independent member states which are located primarily in Europe. The EU traces its origins from the European Coal and Steel Community and the European Economic Community , formed by six countries in 1958...
and other citizens were evacuated from the Lebanon
Lebanon
Lebanon , officially the Republic of LebanonRepublic of Lebanon is the most common term used by Lebanese government agencies. The term Lebanese Republic, a literal translation of the official Arabic and French names that is not used in today's world. Arabic is the most common language spoken among...
..

What is today known as the Limassol Old Port used to be the main port of Limassol
Limassol
Limassol is the second-largest city in Cyprus, with a population of 228,000 . It is the largest city in geographical size, and the biggest municipality on the island. The city is located on Akrotiri Bay, on the island's southern coast and it is the capital of Limassol District.Limassol is the...
, Cyprus
Cyprus
Cyprus , officially the Republic of Cyprus , is a Eurasian island country, member of the European Union, in the Eastern Mediterranean, east of Greece, south of Turkey, west of Syria and north of Egypt. It is the third largest island in the Mediterranean Sea.The earliest known human activity on the...
between its construction (in its current form) in 1956 up until the delivery of the Limassol New Port in 1973. Its original foundations were laid during the British occupation of the island in the late 19th century. Up to and including 1974, the British RAF 1153 Marine Craft Unit (MCU) was stationed in the western part of the harbour.

As times moved on, it changed from being a cargo and passenger terminal to its current use as a leisure, fishing boat and coast guard
Coast guard
A coast guard or coastguard is a national organization responsible for various services at sea. However the term implies widely different responsibilities in different countries, from being a heavily armed military force with customs and security duties to being a volunteer organization tasked with...
shelter. Following an architectural competition, plans have been drawn up to revamp the area and transform it into a more functional leisure centre. For that reason the Old Port had been officially closed and
the project commenced after some delays under the name "Limassol Marina" in 2010.
The source of this article is wikipedia, the free encyclopedia.  The text of this article is licensed under the GFDL.