Encyclopedia
Nearly all biplane
Biplane
A biplane is a fixed-wing aircraft with two superimposed main wings. The Wright brothers' Wright Flyer used a biplane design, as did most aircraft in the early years of aviation. While a biplane wing structure has a structural advantage, it produces more drag than a similar monoplane wing...
aircraft have their upper and lower planes connected by interplane struts which divide the wings into bays braced by diagonal wires. The wires that run outward from the upper to the lower planes resist the distortion on the bay under gravity and are termed landing wires and those from the lower plane outwards to the upper (lift or flying wires
Flying wires
The flying wires of an aircraft work in conjunction with other wing components such as spars and interplane struts to transmit flight loads. Most commonly used on biplane aircraft they are also used on monoplanes and triplanes.-Purpose:...
) resist bay distortion under the aerodynamic lifting force
Lift
Lift may mean:* Lift , a mechanical force generated by an object moving through a fluid* Lift , rising air used by soaring birds and glider, hang glider and paraglider pilots for soaring flight...
. The resulting combination of struts and wires is a quite rigid, box girder
Box girder
A box or tubular girder is a girder that forms an enclosed tube with multiple walls, rather than an or H-beam. Originally constructed of riveted wrought iron, they are now found in rolled or welded steel, aluminium extrusions or pre-stressed concrete....
-like structure independent of its fuselage mountings.

In contrast, early monoplane
Monoplane
A monoplane is a fixed-wing aircraft with one main set of wing surfaces, in contrast to a biplane or triplane. Since the late 1930s it has been the most common form for a fixed wing aircraft.-Types of monoplane:...
s relied entirely on external wire bracing, either directly to the fuselage or to kingposts above it and undercarriage struts below to resist the same forces of lift and gravity. Many later monoplanes have used cantilever
Cantilever
A cantilever is a beam anchored at only one end. The beam carries the load to the support where it is resisted by moment and shear stress. Cantilever construction allows for overhanging structures without external bracing. Cantilevers can also be constructed with trusses or slabs.This is in...
wings, with their lift bracing within the wing to avoid the drag penalties of external wires and strut
Strut
A strut is a structural component designed to resist longitudinal compression. Struts provide outwards-facing support in their lengthwise direction, which can be used to keep two other components separate, performing the opposite function of a tie...
s but significant numbers have had, and continue to have, one or more external braces called lift struts for each wing. These are rigid struts rather than wires and so can resist compressive loads as well as extensions.
The placement of these wing struts struts and the forces acting on them depends chiefly on the wing configuration. They are most common in high-wing aircraft like the Cessna 152
Cessna 152
The Cessna 152 is an American two-seat, fixed tricycle gear, general aviation airplane, used primarily for flight training and personal use.-Development:...
or parasol wing aircraft like the Consolidated PBY Catalina, running from the wing underside to the lower fuselage longeron
Longeron
In aircraft construction, a longeron or stringer or stiffener is a thin strip of wood, metal or carbon fiber, to which the skin of the aircraft is fastened. In the fuselage, longerons are attached to formers and run the longitudinal direction of the aircraft...
or equivalent structure. In flight, these lift struts are in tension from the lift forces. In level flight they convey the weight of the aircraft to the wings. On the ground they are under compression, supporting the wing against gravity. Less commonly, and chiefly in the past, low winged monoplanes like the Piper Pawnee have had lift struts mounted above the wing, acting in compression in flight and in tension on the ground. 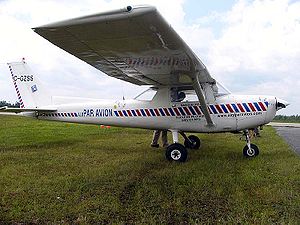 Sometimes each wing has just a single lift strut, as on the Cessna 152, but they often come in pairs, sometimes parallel as on the Catalina, sometimes splayed or as V-form pairs (e.g. Auster Autocrat
Auster Autocrat
-External links:*...
) joined to the fuselage at a single point. Many more complicated arrangements have been used, often with two primary lift struts augmented by auxiliary interconnections known as jury struts between each other or to the wing or the fuselage. Each pair of the inverted V struts of the Pawnee, for example, is assisted by a pair of vertical support struts. 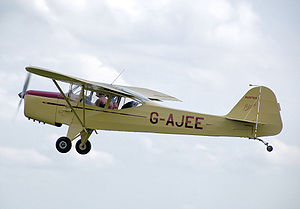 From early times these lift struts have been streamlined, often by enclosing metal load bearing members in shaped casings. The Farman F.190
Farman F.190
|-References:*...
, for example, had its high wings joined to the lower fuselage by parallel duralumin
Duralumin
Duralumin is the trade name of one of the earliest types of age-hardenable aluminium alloys. The main alloying constituents are copper, manganese, and magnesium. A commonly used modern equivalent of this alloy type is AA2024, which contains 4.4% copper, 1.5% magnesium, 0.6% manganese and 93.5%...
tubes enclosed in streamlined spruce
Spruce
A spruce is a tree of the genus Picea , a genus of about 35 species of coniferous evergreen trees in the Family Pinaceae, found in the northern temperate and boreal regions of the earth. Spruces are large trees, from tall when mature, and can be distinguished by their whorled branches and conical...
fairings and the Westland Lysander
Westland Lysander
The Westland Lysander was a British army co-operation and liaison aircraft produced by Westland Aircraft used immediately before and during the Second World War...
used extruded I section beams of light alloy, onto which were screwed a fore and aft pair of duralumin fairings. Later aircraft have had streamlined struts formed directly from shaped metal, like the extruded light alloy struts of the Auster AOP.9
Auster AOP.9
-See also:-Bibliography:...
, or from composites, for example the carbon fibre lift struts of the Remos GX eLITE
Remos GX
|-References:**-External links:***...
. Designers have adopted different methods of improving the aerodynamics of the strut-wing and strut-body, using using similar approaches to those used in interplane struts. Sometimes the streamlining is tapered away close to the wing, as on the Farman F.190; other designs have an extended, faired foot, for example the Skyeton K-10 Swift.

Lift struts have a clear primary structural role but are sometimes also used to position devices like pitot heads and wind driven generators in a region of clear airflow, following the similar use of interplane struts in biplanes.

Lift struts are no longer used by large or fast aircraft in current production because of the drag penalties, but remain common on small (2/4 seat) high wing light aircraft in the ULS
ULS
* Mongol Uls - "Mongolia"ULS is a three letter acronym that can refer to:* Uganda Law Society* Ultimate Limit State, see limit state design* ultra-low sulfur diesel* U.S...
and LSA
LSA
-In law:* Law and Society Association* Law Society of Alberta* Legal Services Agency* List of CFR Sections Affected, a list of new revisions to the US Code of Federal Regulations.-Science and technology:* Late Stone Age...
categories. Not all current strut braced aircraft are small: the Pilatus Porter STOL
STOL
STOL is an acronym for short take-off and landing, a term used to describe aircraft with very short runway requirements.-Definitions:There is no one accepted definition of STOL and many different definitions have been used by different authorities and nations at various times and for a myriad of...
aircraft, which first flew in 1960 and seats up to 10 passengers, remains in production and the de Havilland Twin Otter, a 19-seater has recently (2008) returned to production.
The source of this article is wikipedia, the free encyclopedia.  The text of this article is licensed under the GFDL.