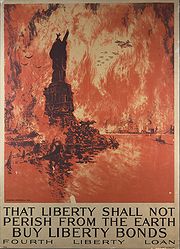 A Liberty Bond was a war bond
War bond
War bonds are debt securities issued by a government for the purpose of financing military operations during times of war. War bonds generate capital for the government and make civilians feel involved in their national militaries...
that was sold in the United States
United States
The United States of America is a federal constitutional republic comprising fifty states and a federal district...
to support the allied cause in World War I
World War I
World War I , which was predominantly called the World War or the Great War from its occurrence until 1939, and the First World War or World War I thereafter, was a major war centred in Europe that began on 28 July 1914 and lasted until 11 November 1918...
. Subscribing to the bonds became a symbol of patriotic duty in the United States and introduced the idea of financial securities to many citizens for the first time. The Act of Congress which authorized the Liberty Bonds is still used today as the authority under which all U.S. Treasury bonds are issued.

There were four issues of Liberty Bonds:

The 1st Liberty Loan Act established a $5 billion aggregate limit on the amount of government bonds issued at 30 years at 3.2% interest, redeemable after 15 years. It raised $2 Billion with 4 million people purchasing bonds.

The 2nd Liberty Loan Act established an $8 billion aggregate limit on the amount of government bonds issued, allowing $3 billion more offered at 25 years at 4% interest, redeemable after 10 years. The amount of the loan totaled $3.8 Billion with 9.4 million people purchasing bonds.


Sales Difficulties and the Subsequent Campaign

The response to the first Liberty Bond was unenthusiastic and although the $2 billion issue reportedly sold out, it probably had to be done below par because the notes traded consistently below par on the street. One reaction to this was to attack bond traders as "unpatriotic" if they sold below par. The Board of Governors of the New York Stock Exchange conducted an investigation of brokerage firms who sold below par to determine if "pro-German influences" were at work. The board forced one such broker to buy the bonds back at par and make a $100,000 donation to the Red Cross. Various explanations were offered for the weakness of the bonds ranging from German sabotage to the rich not buying the bonds because it would give an appearance of tax dodging (the bonds were exempt from some taxes). A common consensus was that more needed to be done to sell the bonds to small investors and the common man, rather than large concerns. The poor reception of the first issue resulted in a convertible re-issue five months later at the higher interest rate of 4% and with more favorable tax terms. Even so when the new issue arrived it also sold below par. This weakness continued with subsequent issues, the 4.25% bond priced as low as 94 upon arrival.

Secretary of the Treasury William Gibbs McAdoo
William Gibbs McAdoo
William Gibbs McAdoo, Jr. was an American lawyer and political leader who served as a U.S. Senator, United States Secretary of the Treasury and director of the United States Railroad Administration...
reacted to the sales problems by creating an aggressive campaign to popularize the bonds. The government used famous artists to make posters, and used movie stars to host bond rallies. Al Jolson
Al Jolson
Al Jolson was an American singer, comedian and actor. In his heyday, he was dubbed "The World's Greatest Entertainer"....
, Elsie Janis
Elsie Janis
Elsie Janis was an American singer, songwriter, actress, and screenwriter. Entertaining the troops during World War I immortalized her as "the sweetheart of the AEF" .-Early career:...
, Mary Pickford
Mary Pickford
Mary Pickford was a Canadian-born motion picture actress, co-founder of the film studio United Artists and one of the original 36 founders of the Academy of Motion Picture Arts and Sciences...
, Douglas Fairbanks
Douglas Fairbanks
Douglas Fairbanks, Sr. was an American actor, screenwriter, director and producer. He was best known for his swashbuckling roles in silent films such as The Thief of Bagdad, Robin Hood, and The Mark of Zorro....
and Charlie Chaplin
Charlie Chaplin
Sir Charles Spencer "Charlie" Chaplin, KBE was an English comic actor, film director and composer best known for his work during the silent film era. He became the most famous film star in the world before the end of World War I...
were among the celebrities that made public appearances promoting the idea that purchasing a liberty bond was "the patriotic thing to do" during the era. Chaplin also made a short film, The Bond
The Bond
The Bond is a propaganda film created by Charlie Chaplin at his own expense for the Liberty Load Committee for theatrical release to help sell U.S. Liberty Bonds during World War I....
, at his own expense for the drive. Even the Boy Scouts
Boy Scouts of America
The Boy Scouts of America is one of the largest youth organizations in the United States, with over 4.5 million youth members in its age-related divisions...
and Girl Scouts
Girl Scouts of the USA
The Girl Scouts of the United States of America is a youth organization for girls in the United States and American girls living abroad. It describes itself as "the world's preeminent organization dedicated solely to girls". It was founded by Juliette Gordon Low in 1912 and was organized after Low...
sold the bonds, using the slogan "Every Scout to Save a Soldier". Beyond these effective efforts, in 1917 the Aviation Section of the U.S. Army Signal Corps established an elite group of Army pilots assigned to the Liberty Bond campaign. The plan for selling bonds was for the pilots to crisscross the country in their Curtis J4 “Jenny” training aircraft in flights of 3 to 5 aircraft. When they arrived over a town, they would perform acrobatic stunts, and put on mock dog fights for the folks below. After performing their air show, they would land on a road, on a golf course, or in a pasture near the town. By the time they shut down their engines, most of the townspeople, attracted by their performance, would have gathered to see them. At that point in time, most people had never even seen an airplane, much less had a chance to ride in one. Routinely each pilot stood in the rear cockpit of his craft and told the assemblage that every person who purchased a Liberty Bond would be taken for a ride in one of the airplanes. The program was successful in raising a substantial amount of money which was used to pay for the war effort. The methodology developed and practiced by the Army was later followed by numerous entrepreneurial flyers known as Barnstormers, who purchased war surplus Jenny airplanes and flew across the country selling airplane rides.

Vast amounts of promotional materials were manufactured. For example, for the third Liberty Loan 9 million posters, 5 million window stickers and 10 million buttons were produced and distributed. The campaign spurred community efforts across the country and resulted in glowing, patriotically-tinged reports on the "success" of the bonds.

Peak United States indebtedness was in August of 1919 at a value of 25,596,000,000 for Liberty Bonds, Victory Notes, War Savings Certificates, and other government securities. As early as 1922 the possibility that the war debt could not be paid in full within the expected schedule was raised and that debt rescheduling may be needed. In 1921 the Treasury Department began issuing short term notes maturing in three to five years to repay the Victory Loan

According to the Massachusetts Historical Society, Because the first World War cost the federal government more than 30 billion dollars (by way of comparison, total federal expenditures in 1913 were only $970 million), these programs became vital as a way to raise funds.

Through the selling of "Liberty bonds," the government raised around 17 billion dollars for the war effort. Considering that there were approximately 100 million Americans during that time, each American, on average, raised 170 dollars on Liberty bonds.

A fifth bond issue relating to World War I was released on April 21, 1919. Consisting of $4.5 billion dollars of gold notes at 4.75% interest, they were convertible in 3 or 4 years. Exempt from all income taxes, they were called at the time "the last of the series of five Liberty Loans." However they were also called the "Victory Liberty Loan," and appear this way on posters of the period.


The Default of the Fourth Liberty Bond

The first three Liberty bonds, and the Victory Loan, were retired during the course of the 1920s but the fourth Liberty Bond lasted into the 1930s leading to a technical default on the bond the terms of which were for payment in gold. This default affected the large majority of Liberty bond debt because the terms of the bonds allowed holders of earlier bonds to trade them for the later bonds which had superior terms. For this reason most of the debt from the first, second, and third Liberty bonds had been rolled into the fourth issue. The fourth Liberty Bond had the following terms:

The U.S. Treasury called this bond on April 15, 1934, but refused to redeem the face value of the bond in gold as required by the terms of bond which read:

The principal and interest hereof are payable in United States gold coin of the present standard of value.

The legal basis for the refusal of the U.S. Treasury to redeem in gold was House Joint Resolution 192, dated June 5, 1933. This resolution was later held to be unconstitutional and thrown out by the U.S. Supreme Court. Chief Justice Hughes writing for the majority elaborated the precedent that Congress may not legally nullify its own contracts:
However, due to the significant restrictions placed on gold trading by Roosevelt's reforms, the Court ruled that the bond-holders' loss was unquantifiable, and that to repay them in dollars according to the 1918 standard of value would be an "unjustified enrichment". The ruling therefore had little practical effect.