Encyclopedia
The Levavasseur project was an early project for a tank
Tank
A tank is a tracked, armoured fighting vehicle designed for front-line combat which combines operational mobility, tactical offensive, and defensive capabilities...
designed in 1903 by the French Captain Levavasseur of the 6th Artillery Battalion, described as a "automobile canon project" (French: Projet de canon autopropulseur). It is considered as the first description, made by a soldier, of what was going to become the tank. Levavasseur was a graduate of Ecole Polytechnique
École Polytechnique
The École Polytechnique is a state-run institution of higher education and research in Palaiseau, Essonne, France, near Paris. Polytechnique is renowned for its four year undergraduate/graduate Master's program...
, of the promotion of 1881 or 1882. According to Armoured Fighting Vehicles of the World:

The project was submitted to the French Technical Artillery Committee (Comité Général d'Artillerie), and after two years of study was presented to the Army Minister by the General President of the Committee. The general described the project in letter No135, dated 1 February 1905:

The locomotive mechanism is then described as a type of continuous track, supporting an armoured box with a weapon:

1) All-terrain machines had not to that day given satisfaction.

2) Hard bodies could infiltrate in the mechanism and damage it.

3) Direction could not be properly controlled.

Overall, the need for such a machine was not felt, and horsedrawn artillery was considered as adequate. 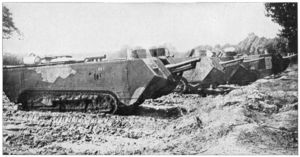 Captain Levavasseur reworked his mechanism, improved its resistance to hard bodies and brought forward a new improved project in 1908 involving an expense of 14,000 francs for the realization of a mock-up.

It is unclear whether General Estienne, the French "Father of the tank" ever knew about this project. One officer however, Commandant Ferrus, who wrote the rejection report, participated in the Schneider tank experiments on 10 September 1915, and became involved with the development of the Saint Chamond
St Chamond (tank)
The Saint-Chamond was the second French heavy tank of the First World War.Overall an inadequate design born of commercial rivalry, the war ended before it was replaced by British heavy tanks.-Development:...
tank in 1916, which displays striking similarities with the Levavasseur project, such as several characteristics of disposition, armament (Canon de 75), motorization (80 hp engine) and general silhouette.

Levavasseur became a Lieutenant Colonel of Artillery, and retired simply expressing his regret that his views had not been taken into consideration earlier before the advent of the World War I
World War I
World War I , which was predominantly called the World War or the Great War from its occurrence until 1939, and the First World War or World War I thereafter, was a major war centred in Europe that began on 28 July 1914 and lasted until 11 November 1918...
conflict.
The source of this article is wikipedia, the free encyclopedia.  The text of this article is licensed under the GFDL.