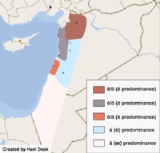 Encyclopedia
Levantine Arabic is a broad variety
Varieties of Arabic
The Arabic language is a Semitic language characterized by a wide number of linguistic varieties within its five regional forms. The largest divisions occur between the spoken languages of different regions. The Arabic of North Africa, for example, is often incomprehensible to an Arabic speaker...
of Arabic
Arabic language
Arabic is a name applied to the descendants of the Classical Arabic language of the 6th century AD, used most prominently in the Quran, the Islamic Holy Book...
spoken in the 100 to 200 km-wide Eastern Mediterranean
Eastern Mediterranean
The Eastern Mediterranean is a term that denotes the countries geographically to the east of the Mediterranean Sea. This region is also known as Greater Syria or the Levant....
coastal strip. It is considered one of the five major varieties of Arabic
In the frame of the general diglossia
Diglossia
In linguistics, diglossia refers to a situation in which two dialects or languages are used by a single language community. In addition to the community's everyday or vernacular language variety , a second, highly codified variety is used in certain situations such as literature, formal...
status of the Arab world, Levantine Arabic is used for daily oral use, while most of the written and official documents and media use Modern Standard Arabic.

On the basis of the criterion of mutual intelligibility, Levantine Arabic may be considered as a self standing language (with different variant or dialects as explained below), and opposed to other Arabic languages such as Cairene Arabic, Maghreb Arabic or Peninisular arabic, in the same kind of relation as French, Spanish or Romanian among latine languages.

Levantine Arabic is spoken in the fertile strip on the eastern shores of the Mediterranean. To the East, in the Desert, one finds North Arabian Bedouin varieties. The transition to Egyptian Arabic
Egyptian Arabic
Egyptian Arabic is the language spoken by contemporary Egyptians.It is more commonly known locally as the Egyptian colloquial language or Egyptian dialect ....
in the South via the Sinai desert where Bedouin varieties are spoken, was proposed by de Jong in 1999. In the North, between Aleppo and Euphrates valley, there may be a transition zone towards North Mesopotamian qeltu varieties (to be confirmed, since the Raqqah variety in the Syrian Euphrates valley still seems to be quite close to South Iraqi and Bedouin varieties.).

The most distinctive feature of Levantine Arabic is probably its stress pattern, which remains closest to the classical Arabic
Classical Arabic
Classical Arabic , also known as Qur'anic or Koranic Arabic, is the form of the Arabic language used in literary texts from Umayyad and Abbasid times . It is based on the Medieval dialects of Arab tribes...
among all varieties. It ignores the gahawa syndrome ('qahwa > ga'hawa) typical of the Mesopotamian and Peninsula Arabic, it does not limit stress to penultimate syllable as Egyptian Arabic (['madrasa] > [mad'rasa]) and is foreign to North-African stress shift to last syllable ([baħr] > [bħar], ['marʔa] > [mra]). Another distinctive feature is the use of a prefixed b- in the imperfect to distinguish indicative mood (with b-) from subjunctive mood (without b-) e.g. ['btɪʃɾɑb] 'you drink' vs. ['tɪʃɾɑb] 'that you drink'.

As in most Arabic speaking areas, the spoken language differs significantly between urban, rural and nomad populations.

It should be noted that Levantine Arabic is commonly understood to be the urban sub-variety. Teaching manuals for foreigners introduce systematically to this sub-variety, as it would sound very strange for a for a foreigner to speak a marked rural dialect, raising immediately questions on unexpected family links for instance.

The area where Levantine Arabic is spoken used to speak Canaanite
Canaanite
Canaanite may refer to:*Canaan and Canaanite people, a historical/Biblical region and people in the area of the present-day Gaza Strip, Israel, West Bank, and Lebanon.*Canaanite languages*Canaanite religion...
languages (Eblaite, Ugaritic, and then Hebrew-Phoenician, characterized by shift of semitic /ā/ to /ō/ and /θ/ to /š/). It had then adopted the more eastern Aramaic in the middle of the 1st millennium BC, generalized as official language by the Persian Empire. Alexander the Great conquered the area, which was then taken by the Romans. Just before arabization,the region certainly counted a significant number of Greek speakers as a part of the Byzantine empire
Byzantine Empire
The Byzantine Empire was the Eastern Roman Empire during the periods of Late Antiquity and the Middle Ages, centred on the capital of Constantinople. Known simply as the Roman Empire or Romania to its inhabitants and neighbours, the Empire was the direct continuation of the Ancient Roman State...
.

Since Roman times, Arabic was a neighbor language, spoken in the desert immediately east of this area (Nabataeans in Petra
Petra
Petra is a historical and archaeological city in the Jordanian governorate of Ma'an that is famous for its rock cut architecture and water conduits system. Established sometime around the 6th century BC as the capital city of the Nabataeans, it is a symbol of Jordan as well as its most visited...
). The Ghassanid kingdom established in the first centuries AD in the Hauran
Hauran
Hauran, , also spelled Hawran or Houran, is a volcanic plateau, a geographic area and a people located in southwestern Syria and extending into the northwestern corner of Jordan. It gets its name from the Aramaic Hawran, meaning "cave land." In geographic and geomorphic terms, its boundaries...
mountains was the first (Christian) Arab authority on the sedentary area. In the first years of the Islamic conquest, the Levant was taken to the Byzantine empire, and the first Caliphate
Caliphate
The term caliphate, "dominion of a caliph " , refers to the first system of government established in Islam and represented the political unity of the Muslim Ummah...
established in Damascus
Damascus
Damascus , commonly known in Syria as Al Sham , and as the City of Jasmine , is the capital and the second largest city of Syria after Aleppo, both are part of the country's 14 governorates. In addition to being one of the oldest continuously inhabited cities in the world, Damascus is a major...
. Arabic entered deeper in the population by then. It should be however considered that the language was adopted gradually (as well as Islam, that the new rulers would have kept as an elite religion in the first place, so as to maximize the amount of taxes on non-muslim "dhimmis"). The persistence of a spoken Aramaic dialect in a few villages in the north of Damascus is the last trace of this slow conversion. It is interesting to note that this Aramaic dialect share feature with rural Palestinian Arabic (e.g. /q/ > /k/).

It may thus be considered that Levantine Arabic results of the adoption of Arabic by speakers with a marked Aramaic substrate. The state of affairs in Aramaic before adoption is widely unknown, but it could have shown dialect variations linked to the language Aramaic replaced, and this might have left traces in the subsequent Arabic dialect. See e.g. the similarity of central palestinian plural suffix pronouns (-kem, -ken, hem, -hen) with their Hebrew counterpart, or the variant of the same pronouns in the Nusairiyyah mountains (-ko:n, -ke:n, -ho:n, -he:n) compared to identical forms in Aramaic.

It is likely that the Arabic they adopted is a Hijazi
Hijazi
Hijazi script, also Hejazi; , literally "Hejazi writing", is the collective name for a number of early Arabic scripts that developed in the Hejaz region of the Arabian peninsula, which includes the cities of Mecca and Medina. As the name suggests, it is associated with the Hejaz region of Arabia....
(as opposed to Najdi
Najdi
Najdi! is a search engine specialized in Republic of Macedonia media content. Unlike most search engines, it does not utilize a spider to gather the content it indexes, but interfaces directly with the websites it covers through RSS or other XML, in combination with the SWISH-E open-source...
spoken by Bedouins) variety of Arabic (as shows e.g. the treatment of internal hamza as semi vowels).

It can be divided into three "mutually intelligible
Mutual intelligibility
In linguistics, mutual intelligibility is recognized as a relationship between languages or dialects in which speakers of different but related languages can readily understand each other without intentional study or extraordinary effort...
" sub-dialects


To these typical, widespread subdialects, one could add marginal varieties such as

The table below shows the correspondance between Modern Standard Arabic (MSA) phonemes, and their counterpart realization in Levantine Arabic. The Urban speech is taken as reference, the variations are given relative to it.


NB. Hamza has a special treatment. At the end of a close syllable, it vanishes, giving more length to the preceeding vowel e.g /ra's/ > [ra:s]. If followed by i, it turns into [j], /nā'im/ > [na:jɪm]. These evolutions plead for a Hijazi origin of Levantine Arabic. Word initially, hamza is often changed to [h] in Southern Levantine.

The table below shows the correspondance between Modern Standard Arabic (MSA) phonemes, and their counterpart realization in Levantine Arabic.

The following pronouns are used as subject, for progressive constructions or copulas.


The trend in the most evolutive variants (i.e. urban) is to lose the distinction between masculine and feminine in the plural. The result is an alignment on the masculine for both genders, but the feminine variant remains understood.

The following pronouns are used as object or possessive pronouns.