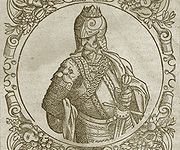 There are 6 surviving transcripts of letters of Gediminas written in 1323–1324 by Grand Duke Gediminas. These letters are one of the first surviving documents from the Grand Duchy of Lithuania
Grand Duchy of Lithuania
The Grand Duchy of Lithuania was a European state from the 12th /13th century until 1569 and then as a constituent part of Polish-Lithuanian Commonwealth until 1791 when Constitution of May 3, 1791 abolished it in favor of unitary state. It was founded by the Lithuanians, one of the polytheistic...
. Since they were sent to the Western Europe, the pope, merchants, and craftspeople, they were written in Latin
Latin
Latin is an Italic language originally spoken in Latium and Ancient Rome. It, along with most European languages, is a descendant of the ancient Proto-Indo-European language. Although it is considered a dead language, a number of scholars and members of the Christian clergy speak it fluently, and...
.

The first letter was written to Pope John XXII
Pope John XXII
Pope John XXII , born Jacques Duèze , was pope from 1316 to 1334. He was the second Pope of the Avignon Papacy , elected by a conclave in Lyon assembled by Philip V of France...
. Gediminas claimed that the Teutonic Knights
Teutonic Knights
The Order of Brothers of the German House of Saint Mary in Jerusalem , commonly the Teutonic Order , is a German medieval military order, in modern times a purely religious Catholic order...
did not act in the interest of the Catholic faith. Instead, they brutally devastated the land. The people were forced into resistance. Gediminas enumerated many crimes and damages done by the knights; for example, he claimed that his predecessor Vytenis
Vytenis
Vytenis was the Grand Duke of Lithuania from c. 1295 to c. 1316. He became the first of the Gediminid dynasty to rule for a considerable amount of time. In the early 14th century his reputation outshone that of Gediminas, who is regarded by modern historians as one of the greatest Lithuanian rulers...
sent a letter to the Franciscan
Franciscan
Most Franciscans are members of Roman Catholic religious orders founded by Saint Francis of Assisi. Besides Roman Catholic communities, there are also Old Catholic, Anglican, Lutheran, ecumenical and Non-denominational Franciscan communities....
monks asking for two brothers who could come to the Grand Duchy of Lithuania to look after a local church. When the Teutonic Knights learned about the letter, they sent their army and destroyed the church. In the last sentence Gediminas vaguely promised to accept Christianity and obey the pope.

The second letter was written on January 25, 1323 to Lübeck
Lübeck
The Hanseatic City of Lübeck is the second-largest city in Schleswig-Holstein, in northern Germany, and one of the major ports of Germany. It was for several centuries the "capital" of the Hanseatic League and, because of its Brick Gothic architectural heritage, is listed by UNESCO as a World...
, Sund
Sund
-Places:*Sund, Åland, a municipality in Finland*Sund, Norway, a municipality in Norway*Sund, Faroe Islands, a town in the Faroe Islands*Sund, Sweden, a village in Trosa Municipality, Sweden*Oresund, a strait between the Baltic Sea and the North Sea-Other:...
, Bremen
Bremen
The City Municipality of Bremen is a Hanseatic city in northwestern Germany. A commercial and industrial city with a major port on the river Weser, Bremen is part of the Bremen-Oldenburg metropolitan area . Bremen is the second most populous city in North Germany and tenth in Germany.Bremen is...
, Magdeburg
Magdeburg
Magdeburg , is the largest city and the capital city of the Bundesland of Saxony-Anhalt, Germany. Magdeburg is situated on the Elbe River and was one of the most important medieval cities of Europe....
, Cologne
Cologne
Cologne is Germany's fourth-largest city , and is the largest city both in the Germany Federal State of North Rhine-Westphalia and within the Rhine-Ruhr Metropolitan Area, one of the major European metropolitan areas with more than ten million inhabitants.Cologne is located on both sides of the...
and other cities. Gediminas explained that the Grand Duchy of Lithuania was very tolerant to the Christians, but remained pagan and did not accept Christianity only because of brutal Teutonic Knights. He told about the first letter sent to the pope and his intentions to baptize in the Catholic rite. Gediminas invited knights, squire
Squire
The English word squire is a shortened version of the word Esquire, from the Old French , itself derived from the Late Latin , in medieval or Old English a scutifer. The Classical Latin equivalent was , "arms bearer"...
s, merchants, doctors, smiths, wheelwrights, cobbler
Shoemaking
Shoemaking is the process of making footwear. Originally, shoes were made one at a time by hand. Traditional handicraft shoemaking has now been largely superseded in volume of shoes produced by industrial mass production of footwear, but not necessarily in quality, attention to detail, or...
s, skinners
Skinner (profession)
A Skinner is a person who skins animals such as cattle, sheep, and pigs, part or whole. Historically, skinners engaged in the hide and fur trades.A "mule skinner", slang for muleteer, is a driver of mules....
, millers, and others to come to the Grand Duchy and practice their trade and faith without any restrictions. The peasants were promised tax exemption for ten years. The merchants were also exempt from any tariffs or taxes. This letter is best known because Vilnius
Vilnius
Vilnius is the capital of Lithuania, and its largest city, with a population of 560,190 as of 2010. It is the seat of the Vilnius city municipality and of the Vilnius district municipality. It is also the capital of Vilnius County...
, capital of Lithuania, was mentioned in written sources for the first time. Therefore, 1323 is considered to be the official founding year of Vilnius. Gediminas is considered to be the city's founder even though the city existed years before Gediminas' reign. Also, Vilnius is unambiguously mentioned as the capital city.

The third letter addressed to Lübeck, Rostock
Rostock
Rostock -Early history:In the 11th century Polabian Slavs founded a settlement at the Warnow river called Roztoc ; the name Rostock is derived from that designation. The Danish king Valdemar I set the town aflame in 1161.Afterwards the place was settled by German traders...
, Sund, Greifswald
Greifswald
Greifswald , officially, the University and Hanseatic City of Greifswald is a town in northeastern Germany. It is situated in the state of Mecklenburg-Vorpommern, at an equal distance of about from Germany's two largest cities, Berlin and Hamburg. The town borders the Baltic Sea, and is crossed...
, Stetin, Gotland
Gotland
Gotland is a county, province, municipality and diocese of Sweden; it is Sweden's largest island and the largest island in the Baltic Sea. At 3,140 square kilometers in area, the region makes up less than one percent of Sweden's total land area...
cities was written on May 26, 1323. In essence it repeated the second letter. It asked for various craftspeople (the list of crafts was expanded) to come to Lithuania and practice their trade. It said that there were three churches in the duchy: two Franciscan (in Vilnius and in Navahradak
Navahradak
-Early history:First mentioned in the Sophian First Chronicle and Fourth Novgorod Chronicle in 1044 in relation to a war of Yaroslav I the Wise against Lithuanian tribes. It was also mentioned in the Hypatian Codex under 1252 as Novogorodok -Early history:First mentioned in the Sophian First...
) and one Dominican
Dominican Order
The Order of Preachers , after the 15th century more commonly known as the Dominican Order or Dominicans, is a Catholic religious order founded by Saint Dominic and approved by Pope Honorius III on 22 December 1216 in France...
. Everyone was free to use them.

The fourth and the fifth letters were also written on May 26, 1323 and were addressed to the Franciscan and Dominican Orders. Gediminas, in anticipation of his baptism, invited priests and monks to come to the Grand Duchy of Lithuania. He also asked to spread the word to craftspeople that they were welcome in Lithuania. In the letter to the Dominicans, Gediminas mentioned that his seal was burned by the Teutonic Knights.

The last surviving letter was written on September 22, 1324 and was addressed to the bishop of Tartu
Tartu
Tartu is the second largest city of Estonia. In contrast to Estonia's political and financial capital Tallinn, Tartu is often considered the intellectual and cultural hub, especially since it is home to Estonia's oldest and most renowned university. Situated 186 km southeast of Tallinn, the...
, Erzel, ruler of Tallinn
Tallinn
Tallinn is the capital and largest city of Estonia. It occupies an area of with a population of 414,940. It is situated on the northern coast of the country, on the banks of the Gulf of Finland, south of Helsinki, east of Stockholm and west of Saint Petersburg. Tallinn's Old Town is in the list...
land, and Council of Riga
Riga
Riga is the capital and largest city of Latvia. With 702,891 inhabitants Riga is the largest city of the Baltic states, one of the largest cities in Northern Europe and home to more than one third of Latvia's population. The city is an important seaport and a major industrial, commercial,...
. It reported that the Teutonic Knights violated a peace treaty signed earlier. The knights attacked border regions, killed residents, and took all valuables. Many messengers were captured and killed. Gediminas asked for help enforcing the treaty.
The source of this article is wikipedia, the free encyclopedia.  The text of this article is licensed under the GFDL.