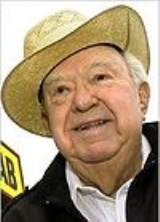 Encyclopedia
Leslie Bishop "Les" Schwab (October 3, 1917 - May 18, 2007) was an American
United States
The United States of America is a federal constitutional republic comprising fifty states and a federal district...
businessman from Oregon
Oregon
Oregon is a state in the Pacific Northwest region of the United States. It is located on the Pacific coast, with Washington to the north, California to the south, Nevada on the southeast and Idaho to the east. The Columbia and Snake rivers delineate much of Oregon's northern and eastern...
. He was the founder of Les Schwab Tire Centers
Les Schwab Tire Centers
Les Schwab Tire Centers is a tire retail chain operating in the western United States. Founded in 1952, The company is named for founder Les Schwab and is headquartered in the Central Oregon city of Bend. The private company employs over 7,000 people in eight western states...
, a company which Modern Tire Dealer called "arguably the most respected independent tire store chain in the United States." A native of Oregon, he served in the U.S. Army Air Forces
United States Army Air Forces
The United States Army Air Forces was the military aviation arm of the United States of America during and immediately after World War II, and the direct predecessor of the United States Air Force....
during World War II
World War II
World War II, or the Second World War , was a global conflict lasting from 1939 to 1945, involving most of the world's nations—including all of the great powers—eventually forming two opposing military alliances: the Allies and the Axis...
before starting his business in 1952.

Schwab was born in Bend, Oregon
Bend, Oregon
Bend is a city in and the county seat of Deschutes County, Oregon, United States, and the principal city of the Bend, Oregon Metropolitan Statistical Area. Bend is Central Oregon's largest city, and, despite its modest size, is the de facto metropolis of the region, owing to the low population...
, on October 3, 1917. His family moved to Minnesota
Minnesota
Minnesota is a U.S. state located in the Midwestern United States. The twelfth largest state of the U.S., it is the twenty-first most populous, with 5.3 million residents. Minnesota was carved out of the eastern half of the Minnesota Territory and admitted to the Union as the thirty-second state...
two years later with the young Les in tow. The family moved back to Central Oregon
Central Oregon
Central Oregon is a geographic region in the U.S. state of Oregon and is traditionally considered to be made up of Deschutes, Jefferson, and Crook counties. Other definitions include larger areas, often encompassing areas to the north towards the Columbia River, eastward towards Burns, or south...
in 1929, where Schwab was schooled in a railroad boxcar
Boxcar
A boxcar is a railroad car that is enclosed and generally used to carry general freight. The boxcar, while not the simplest freight car design, is probably the most versatile, since it can carry most loads...
at the Brooks Scanlon logging camp, with his mother as schoolteacher. While in high school in Bend at age 15, Schwab and his three siblings became orphans in 1933 when both parents died within months (mother died of pneumonia
Pneumonia
Pneumonia is an inflammatory condition of the lung—especially affecting the microscopic air sacs —associated with fever, chest symptoms, and a lack of air space on a chest X-ray. Pneumonia is typically caused by an infection but there are a number of other causes...
, alcoholic father found dead in front of a moonshine
Moonshine
Moonshine is an illegally produced distilled beverage...
joint). An aunt and uncle offered to take him in, instead he rented a room in a boarding house for $15 a month and began delivering the Oregon Journal
Oregon Journal
The Oregon Journal was Portland, Oregon's daily afternoon newspaper from 1902 to 1982. The Journal was founded in Portland by C. S. Jackson, the publisher of Pendleton, Oregon's East Oregonian newspaper, after a group of Portlanders convinced Jackson to help in the reorganization of the Portland...
newspaper. At the paper he would eventually cover all the routes in Bend, nine in all. He completed his high school education and graduated from Bend High School
Bend High School
Bend Senior High School is the oldest high school located in Bend, Oregon, United States. The school opened in 1904, but did not graduate its first class of seniors until 1909. Old Bend High School, the original building, was located downtown on Bond Street, where the Bend-La Pine School District...
in 1935. He married his high school sweetheart in 1936 and they became parents in 1940. Schwab became circulation manager for the Bend newspaper, The Bulletin, in 1942 and served in the Army Air Corps
United States Army Air Corps
The United States Army Air Corps was a forerunner of the United States Air Force. Renamed from the Air Service on 2 July 1926, it was part of the United States Army and the predecessor of the United States Army Air Forces , established in 1941...
during World War II
World War II
World War II, or the Second World War , was a global conflict lasting from 1939 to 1945, involving most of the world's nations—including all of the great powers—eventually forming two opposing military alliances: the Allies and the Axis...
.

In the communities served by these stores, the company became known for their advertising featuring employees running out to meet customers, an annual free beef
Beef
Beef is the culinary name for meat from bovines, especially domestic cattle. Beef can be harvested from cows, bulls, heifers or steers. It is one of the principal meats used in the cuisine of the Middle East , Australia, Argentina, Brazil, Europe and the United States, and is also important in...
promotion, and the company slogan: "If we can't guarantee it, we won't sell it.". Despite the success of the company, Les Schwab refused to take the company public.

The company moved its corporate headquarters from Prineville to Bend in December 2008. Announced two years earlier, it exchanged its modest one-story cinder block offices (externally resembling a tire store) for an upscale, three-story executive campus. The new site in Bend at Juniper Ridge is on 12 acres (4.9 ha) and cost $33 million.

Les wed his high school sweetheart Dorothy Harlan in 1936 and they were married over 70 years. They had two children, Harlan and Margie, who both died before their parents; Harlan (1940-1971) died in an automobile accident and Margie Schwab Denton (1952-2005) from cancer
Cancer
Cancer , known medically as a malignant neoplasm, is a large group of different diseases, all involving unregulated cell growth. In cancer, cells divide and grow uncontrollably, forming malignant tumors, and invade nearby parts of the body. The cancer may also spread to more distant parts of the...
. In 1986 he wrote an autobiography
Autobiography
An autobiography is a book about the life of a person, written by that person.-Origin of the term:...
, Les Schwab, Pride in Performance, Keep it Going. In the late 1980s he gave up day-to-day control of the company. In the early 1990s he and his wife donated funds to the local hospital to fund an expansion in honor of his son. Following the death of his daughter, his own health began to deteriorate in late 2005. He died on May 18, 2007, survived by his wife, four grandchildren, and several great-grandchildren. The Les Schwab Amphitheater
Les Schwab Amphitheater
The Les Schwab Amphitheater is an outdoor riverfront amphitheater built in the historic Old Mill District in Bend, Oregon, United States. The amphitheater was named in honor of Central Oregon businessman Les Schwab...
in Bend is named in his honor.