Encyclopedia
Lepidodendron is an extinct genus
Genus
In biology, a genus is a low-level taxonomic rank used in the biological classification of living and fossil organisms, which is an example of definition by genus and differentia...
of primitive, vascular, arborescent (tree
Tree
A tree is a perennial woody plant. It is most often defined as a woody plant that has many secondary branches supported clear of the ground on a single main stem or trunk with clear apical dominance. A minimum height specification at maturity is cited by some authors, varying from 3 m to...
-like) plant
Plant
Plants are living organisms belonging to the kingdom Plantae. Precise definitions of the kingdom vary, but as the term is used here, plants include familiar organisms such as trees, flowers, herbs, bushes, grasses, vines, ferns, mosses, and green algae. The group is also called green plants or...
related to the Lycopsids (club mosses). It was part of the coal forest
Coal forest
Coal forests were the vast swathes of wetlands that extended over much of the tropical land areas during late Carboniferous and Permian times. These forests got their name because they accumulated enormous deposits of peat which later changed into coal...
flora. They sometimes reached heights of over 30 metres (98.4 ft), and the trunks were often over 1 m (3.3 ft) in diameter, and thrived during the Carboniferous
Carboniferous
The Carboniferous is a geologic period and system that extends from the end of the Devonian Period, about 359.2 ± 2.5 Mya , to the beginning of the Permian Period, about 299.0 ± 0.8 Mya . The name is derived from the Latin word for coal, carbo. Carboniferous means "coal-bearing"...
period. Sometimes called "giant club mosses", this is actually not correct as they are actually quillwort
Quillwort
Isoëtes, also written Isoetes and commonly known as the quillworts, is a genus of plants in the class Isoetopsida and order Isoetales. They are considered "fern allies". There are about 140-150 species, with a cosmopolitan distribution but often scarce to rare...
s and not club mosses.

Lepidodendron had tall, thick trunks that rarely branched and were topped with a crown of bifurcating branches bearing clusters of leaves
Leaf
A leaf is an organ of a vascular plant, as defined in botanical terms, and in particular in plant morphology. Foliage is a mass noun that refers to leaves as a feature of plants....
. These leaves were long and narrow, similar to large blades of grass, and were spirally-arranged. The vascular system was a siphonostele with exarch xylem
Xylem
Xylem is one of the two types of transport tissue in vascular plants. . The word xylem is derived from the Classical Greek word ξυλον , meaning "wood"; the best-known xylem tissue is wood, though it is found throughout the plant...
maturation.

The closely packed diamond-shaped leaf scars left on the trunk and stems as the plant grew provide some of the most interesting and common fossil
Fossil
Fossils are the preserved remains or traces of animals , plants, and other organisms from the remote past...
s in Carboniferous shale
Shale
Shale is a fine-grained, clastic sedimentary rock composed of mud that is a mix of flakes of clay minerals and tiny fragments of other minerals, especially quartz and calcite. The ratio of clay to other minerals is variable. Shale is characterized by breaks along thin laminae or parallel layering...
s and accompanying coal
Coal
Coal is a combustible black or brownish-black sedimentary rock usually occurring in rock strata in layers or veins called coal beds or coal seams. The harder forms, such as anthracite coal, can be regarded as metamorphic rock because of later exposure to elevated temperature and pressure...
deposits. These fossils look much like tire tracks or alligator
Alligator
An alligator is a crocodilian in the genus Alligator of the family Alligatoridae. There are two extant alligator species: the American alligator and the Chinese alligator ....
skin. 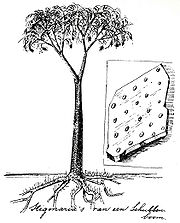 The scars, or leaf cushions, were composed of green photosynthetic
Photosynthesis
Photosynthesis is a chemical process that converts carbon dioxide into organic compounds, especially sugars, using the energy from sunlight. Photosynthesis occurs in plants, algae, and many species of bacteria, but not in archaea. Photosynthetic organisms are called photoautotrophs, since they can...
tissue, evidenced by the cuticle covering and being dotted with stomata, microscopic pores through which carbon dioxide
Carbon dioxide
Carbon dioxide is a naturally occurring chemical compound composed of two oxygen atoms covalently bonded to a single carbon atom...
from the air diffuses into plants. Likewise, the trunks of Lepidodendron would have been green, unlike modern trees which have scaly, non-photosynthetic brown or gray bark.

Lepidodendron has been likened to a giant herb
Herb
Except in botanical usage, an herb is "any plant with leaves, seeds, or flowers used for flavoring, food, medicine, or perfume" or "a part of such a plant as used in cooking"...
. The trunks produced little wood, being mostly soft tissues. Most structural support came from a thick, bark-like region. This region remained around the trunk as a rigid layer that grew thicker, but did not flake off like that of most modern trees. As the tree grew, the leaf cushions expanded to accommodate the increasing width of the trunk.

The branches of this plant ended in cone-structures. Lepidodendron did not produce true seed
Seed
A seed is a small embryonic plant enclosed in a covering called the seed coat, usually with some stored food. It is the product of the ripened ovule of gymnosperm and angiosperm plants which occurs after fertilization and some growth within the mother plant...
s like many modern plants. Instead, it reproduced by means of elaborate, encapsulated spore
Spore
In biology, a spore is a reproductive structure that is adapted for dispersal and surviving for extended periods of time in unfavorable conditions. Spores form part of the life cycles of many bacteria, plants, algae, fungi and some protozoa. According to scientist Dr...
s. It is estimated that these plants grew rapidly and lived 10–15 years. Most species were probably monocarpic, meaning they reproduced only once toward the end of their life cycle.

Lepidodendron likely lived in the wettest parts of the coal swamps that existed during the Carboniferous period. They grew in dense stands, likely having as many as 1000 to 2000 giant clubmosses per hectare. This would have been possible because they did not branch until fully grown, and would have spent much of their lives as unbranched poles.

By the Mesozoic
Mesozoic
The Mesozoic era is an interval of geological time from about 250 million years ago to about 65 million years ago. It is often referred to as the age of reptiles because reptiles, namely dinosaurs, were the dominant terrestrial and marine vertebrates of the time...
era, the giant Lycopsids had died out and were replaced by smaller Quillworts, probably due to competition from the emerging woody gymnosperm
Gymnosperm
The gymnosperms are a group of seed-bearing plants that includes conifers, cycads, Ginkgo, and Gnetales. The term "gymnosperm" comes from the Greek word gymnospermos , meaning "naked seeds", after the unenclosed condition of their seeds...
s and other plants. Lepidodendron is one of the more common plant fossil
Fossil
Fossils are the preserved remains or traces of animals , plants, and other organisms from the remote past...
s found in Pennsylvanian
Pennsylvanian
The Pennsylvanian is, in the ICS geologic timescale, the younger of two subperiods of the Carboniferous Period. It lasted from roughly . As with most other geochronologic units, the rock beds that define the Pennsylvanian are well identified, but the exact date of the start and end are uncertain...
(Late Carboniferous) age rocks. They are closely related to other extinct Lycopsid genera, Sigillaria
Sigillaria
Sigillaria is a genus of extinct, spore-bearing, arborescent plants which flourished in the Late Carboniferous period but dwindled to extinction in the early Permian period. It was a lycopodiophyte, and is related to the lycopsids, or club-mosses, but even more closely to quillworts, as was its...
and Lepidendropsis.

In the 19th Century, due to the reptilian look of the diamond-shaped leaf scar pattern, petrified trunks of Lepidodendron were exhibited at fairgrounds by amateurs as giant fossil lizard
Lizard
Lizards are a widespread group of squamate reptiles, with nearly 3800 species, ranging across all continents except Antarctica as well as most oceanic island chains...
s or snake
Snake
Snakes are elongate, legless, carnivorous reptiles of the suborder Serpentes that can be distinguished from legless lizards by their lack of eyelids and external ears. Like all squamates, snakes are ectothermic, amniote vertebrates covered in overlapping scales...
s.

The name Lepidodendron comes from the Greek
Greek language
Greek is an independent branch of the Indo-European family of languages. Native to the southern Balkans, it has the longest documented history of any Indo-European language, spanning 34 centuries of written records. Its writing system has been the Greek alphabet for the majority of its history;...
lepido, scale, and dendron, tree.