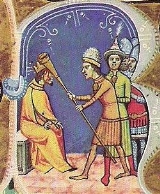 Lehel (died 955) was a Magyar chieftain
Tribal chief
A tribal chief is the leader of a tribal society or chiefdom. Tribal societies with social stratification under a single leader emerged in the Neolithic period out of earlier tribal structures with little stratification, and they remained prevalent throughout the Iron Age.In the case of ...
, one of the brilliant military leaders of prince Taksony of Hungary
Taksony of Hungary
Taksony , Grand Prince of the Hungarians .Taksony was the son of Zoltán , the fourth son of Árpád, the second Grand Prince of the Hungarians...
, the descendant of Árpád
Árpád
Árpád was the second Grand Prince of the Hungarians . Under his rule the Hungarian people settled in the Carpathian basin. The dynasty descending from him ruled the Hungarian tribes and later the Kingdom of Hungary until 1301...
. He was one of the most important figures of the Magyar invasions of Europe. During his military campaigns, he managed to threaten much of Western Europe, therefore it was a common saying at that time: "A sagittis Hungarorum, libera nos Domine" (Lord, save us from the arrows of the Hungarians"). He died at the Battle of Augsburg.

Anonymus
Anonymus
Anonymus is the Latin spelling of anonymous. This Latin spelling, however, is traditionally used by scholars in the humanities to refer to any ancient writer whose name is not known, or to a manuscript of their work...
calls him the son of Tas
TAS
- Organizations :* Trent Accreditation Scheme, an internationally-active hospital quality and safety surveying group* Taipei American School, an international school in Taipei, Taiwan* The Armidale School, New South Wales, Australia...
, who was one of the "Seven Chieftains of Hungary", and descendent of Árpád
Árpád
Árpád was the second Grand Prince of the Hungarians . Under his rule the Hungarian people settled in the Carpathian basin. The dynasty descending from him ruled the Hungarian tribes and later the Kingdom of Hungary until 1301...
. Most historians agree that there is a mismatch in the timing, so he should be the son of Tas, but the grandson of Árpád.

Lehel led the Nitrian Kabars at the Battle of Augsburg. The commander was horka
Horka (title)
Horka or harka was a title used by the Magyar tribes in the 9th and 10th centuries. According to Emperor Constantine Porphyrogenetos in De administrando imperio, the horka had judicial authority. However, in other sources the term horka was applied to a military leader...
Bulcsu, who was not a descendent of the Árpád. The other main military leader was Súr.

The battle ended with the defeat of the Hungarians, but it was not as overwhelming defeat, as the Germans did not launch a campaign against Hungary for decades after the battle. However, the three military leaders were caught and were hanged at Regensburg
Regensburg
Regensburg is a city in Bavaria, Germany, located at the confluence of the Danube and Regen rivers, at the northernmost bend in the Danube. To the east lies the Bavarian Forest. Regensburg is the capital of the Bavarian administrative region Upper Palatinate...
.

The Chronicon Pictum
Chronicon Pictum
The Chronicon Pictum Pictum, Chronica Picta or Chronica de Gestis Hungarorum) is a medieval illustrated chronicle from the Kingdom of Hungary from the fourteenth century...
, by Márk de Kált, writes about the following (originally in Latin
Latin
Latin is an Italic language originally spoken in Latium and Ancient Rome. It, along with most European languages, is a descendant of the ancient Proto-Indo-European language. Although it is considered a dead language, a number of scholars and members of the Christian clergy speak it fluently, and...
):

"In 955, (...) the Hungarians reached the city of Augsburg
Augsburg
Augsburg is a city in the south-west of Bavaria, Germany. It is a university town and home of the Regierungsbezirk Schwaben and the Bezirk Schwaben. Augsburg is an urban district and home to the institutions of the Landkreis Augsburg. It is, as of 2008, the third-largest city in Bavaria with a...
. Close to the city, at the Lech-field, the Germans smashed the Hungarians, part of them were killed brutally, some others were imprisoned. At that place Lehel and Bulcsu were also imprisoned, and taken in front of the emperor. When the emperor asked, why the Hungarians are so cruel against the Christians, they replied, "We are the revenge of the highest God, sent to you as a scourge. You shall imprison us and kill us, when we cease to chase you." Then the emperor called them: "Choose the type of death you wish". Then Lehel replied, "Bring me my horn, which I will blow, then I will reply". The horn was handed to him, and during the preparation to blow it, he stepped forward, and hit the emperor so strongly he died instantly. Then he said: "You will walk before me and serve me in the other world", as it is a common belief within the Scythians, that whoever they killed in their lives will serve them in the other world. They were taken to custody and were hanged quickly in Regensburg
Regensburg
Regensburg is a city in Bavaria, Germany, located at the confluence of the Danube and Regen rivers, at the northernmost bend in the Danube. To the east lies the Bavarian Forest. Regensburg is the capital of the Bavarian administrative region Upper Palatinate...
."

Nowadays there is a horn described as "Lehel's horn" at Jászberény
Jászberény
Jászberény is a city and market centre in Jász-Nagykun-Szolnok county in Hungary.- Location :Jászberény is located in central Hungary, on the Zagyva River, a tributary of the Tisza River...
, in the Museum of Jász. This is a Byzantine ivory horn from 10-11th century and most probably not the same as the horn from the myth.