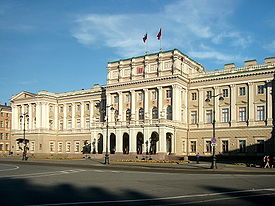 The Legislative Assembly of Saint Petersburg is the legislative power
Legislature
A legislature is a kind of deliberative assembly with the power to pass, amend, and repeal laws. The law created by a legislature is called legislation or statutory law. In addition to enacting laws, legislatures usually have exclusive authority to raise or lower taxes and adopt the budget and...
body of Saint Petersburg
Saint Petersburg
Saint Petersburg is a city and a federal subject of Russia located on the Neva River at the head of the Gulf of Finland on the Baltic Sea...
, a federal subject of Russia, which has existed since 1994 and succeeded the Leningrad Council of People Deputies (Lensovet). It is located in a historic building, Mariinsky Palace
Mariinsky Palace
Mariinsky Palace, also known as Marie Palace , was the last Neoclassical imperial palace to be constructed in Saint Petersburg, Russia. It was built between 1839 and 1844 to a design by the court architect Andrei Stackensneider....
.

According to the new federal legislation
Vladimir Putin legislation and program
During his presidency Vladimir Putin proposed 227 legislative acts of the Russian Federation .-Legislation proposed by Putin, approved by the Federal Assembly of Russia, and signed by Putin:-First term:...
, since 2005 the governor of Saint Petersburg (as well as heads of other federal subjects of Russia
Federal subjects of Russia
Russia is a federation which, since March 1, 2008, consists of 83 federal subjects . In 1993, when the Constitution was adopted, there were 89 federal subjects listed...
) is proposed by the President of Russia and approved by the regional legislature. On December 20, 2006, incumbent Valentina Matviyenko
Valentina Matviyenko
Valentina Ivanovna Matviyenko , born 7 April 1949 in the Ukrainian SSR), is currently the highest-ranking female politician in Russia, the former governor of Saint Petersburg and the current Chairman of the Federation Council of the Russian Federation...
was approved governor with forty votes in favor and three votes against (Mikhail Amosov, Natalya Yevdokimova, and Sergey Gulyayev of the Democratic faction representing Yabloko
Yabloko
The Russian United Democratic Party "Yabloko" The Russian United Democratic Party "Yabloko" The Russian United Democratic Party "Yabloko" (Russian: Росси́йская объединённая демократи́ческая па́ртия «Я́блоко» Rossiyskaya obyedinyonnaya demokraticheskaya partiya "Yabloko"; is a Russian social...
http://zaks.ru/a0/ru/archive/view.thtml?i=26086&p=0http://www.kadis.ru/daily/index.html?id=33407http://yabloko.ru/Publ/2006/2006_12/051220_kasp_vishn.html).


Speakers of the Legislative Assembly of Saint Petersburg


Representative to the Federation Council of Russia