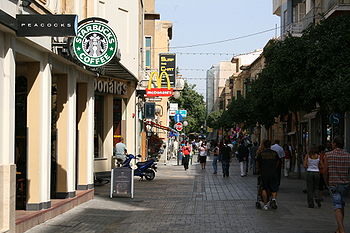 Ledra Street is a major shopping thoroughfare in central Nicosia
Nicosia
Nicosia from , known locally as Lefkosia , is the capital and largest city in Cyprus, as well as its main business center. Nicosia is the only divided capital in the world, with the southern and the northern portions divided by a Green Line...
, Cyprus
Cyprus
Cyprus , officially the Republic of Cyprus , is a Eurasian island country, member of the European Union, in the Eastern Mediterranean, east of Greece, south of Turkey, west of Syria and north of Egypt. It is the third largest island in the Mediterranean Sea.The earliest known human activity on the...
, which links North
North Nicosia
North Nicosia or Northern Nicosia , is the capital and largest city of the de facto Turkish Republic of Northern Cyprus. It is the northern half of Nicosia, and governed by the Nicosia Turkish Municipality...
and South Nicosia.

It is the site of the former Ledra Street barricade where the street ran across the United Nations buffer zone
United Nations Buffer Zone in Cyprus
The United Nations Buffer Zone in Cyprus runs for more than along what is known as the Green Line and has an area of . The zone partitions the island of Cyprus into a southern area effectively controlled by the government of the Republic of Cyprus , and the northern area...
. The barricade symbolised the division of Nicosia between the Greek south and Turkish north which was under the control of the unrecognised, self-declared Turkish Republic of Northern Cyprus (TRNC)
Turkish Republic of Northern Cyprus
Northern Cyprus or North Cyprus , officially the Turkish Republic of Northern Cyprus , is a self-declared state that comprises the northeastern part of the island of Cyprus...
. The barricade was removed in April 2008 and Ledra Street became the sixth crossing between the southern and northern parts of Cyprus. Ledra street is parallel to Onasagorou Street
Onasagorou Street
Onasagorou Street is a major shopping street in central Nicosia that runs from Eleftheria square to Faneromeni School. It has been a fashionable shopping street since the 19th century and is currently the home of many high-priced fashion shops. It is currently one of the most expensive strips of...
.

The name of the street refers to the ancient city-kingdom
Ten city-kingdoms of Cyprus
The ten city-kingdoms of ancient Cyprus were the Greek, Graeco-Phoenician or Graeco-Eteocypriot, states listed in an inscription of the Assyrian king Esarhaddon in 673-672 BC:*Paphos, Πάφος *Salamis, Σαλαμίς *Soloi, Σόλοι...
of Ledra
Ledra
thumb|right|250px|Map showing the ancient city Kingdoms of CyprusLedra , also spelt Ledrae was an ancient city-kingdom located in the centre of Cyprus where the capital city of Nicosia is today. It was established in 1050 BC but by Hellenistic times it had dwindled to a small village...
, established in 1050 BC, that was located in the centre of the island where the capital city is today.

The street leads off Eleftheria square
Eleftheria square
Eleftheria square , is the main square in central Nicosia, Cyprus. It forms the intersection of Ledra and Onasagorou streets with Stasinou, Omirou, Kostaki Pantelidi, Konstandinou Palaiologou and Evagorou avenues. Prior to 1974 the centre of city was considered to be Faneromeni Square...
, runs in a South to North direction and is about 1 km long. Most of it lies within the area effectively controlled by the Republic of Cyprus while a short stretch at the northern end between the UN buffer zone and the intersection with Arasta Street and Girne Caddesı falls within the Turkish occupied part of Nicosia.

Traditionally, Ledra Street was the main shopping street
Street
A street is a paved public thoroughfare in a built environment. It is a public parcel of land adjoining buildings in an urban context, on which people may freely assemble, interact, and move about. A street can be as simple as a level patch of dirt, but is more often paved with a hard, durable...
of the capital, although in recent years it has been superseded by more accessible streets further out from the centre. Properties on the street are largely for commercial use and command some of the highest real estate prices on the island.

During the EOKA struggle
EOKA
EOKA was an anticolonial, antiimperialist nationalist organisation with the ultimate goal of "The liberation of Cyprus from the British yoke". Although not stated in its initial declaration of existence which was printed and distributed on the 1st of April 1955, EOKA also had a target of achieving...
that ran from 1955–1959, the street acquired the informal nickname The Murder Mile
Murder mile
Murder Mile is a nickname sometimes given to roads known for high crime rates or military conflict. Such roads include:* Ledra Street, in Nicosia, Cyprus, in the late 1950s* Upper and Lower Clapton Roads in Hackney, London, in the early 2000s...
in reference to the frequent targeting of the British military by nationalist fighters along its course.


The sealing of Ledra Street

During the Turkish army invasion of Cyprus in 1974, Turkish troops occupied northern Nicosia (as well as the northern part of Cyprus). A buffer zone
United Nations Buffer Zone in Cyprus
The United Nations Buffer Zone in Cyprus runs for more than along what is known as the Green Line and has an area of . The zone partitions the island of Cyprus into a southern area effectively controlled by the government of the Republic of Cyprus , and the northern area...
was established across the island along the ceasefire line to separate the northern Turkish controlled part of the island, and the south. The buffer zone runs through Nicosia, where it is sometimes just several meters wide, and all roads running through the zone have been effectively sealed.

The street south of the blockade was largely pedestrianised in 1998.

In December 2005, as talks between the north and south on the reopening of Ledra Street were on-going, the Turkish Cypriot side demolished the wall between the north and the UN buffer zone and began constructing a footbridge just north of the UN buffer zone. The move attracted protests from both the Greek Cypriot side and UNFICYP. The former expressed concerns over security, saying that the bridge allowed easy access for Turkish armed personnel in the buffer zone, while the latter said although there was no infringement of the buffer zone, it could not support the move to reopen Ledra Street at that time because the actions had not been agreed to by both sides. The Turkish Cypriot side removed the footbridge in 9 January 2007, a move which was welcomed by UNFICYP.

On 8 March 2007, the Greek Cypriot government demolished the wall between the southern portion of Ledra Street and the UN buffer zone and replaced it with 2m-high screens. Then Greek Cypriot president Tassos Papadopoulos said the Cyprus government had unilaterally planned for the dismantling of the Ledra Street wall. He added that with demolition of the wall, his government would consent to the passage being opened if Turkish troops which were present in the area were withdrawn, the derelict buildings on either side of Ledra Street strengthened and Turkish troops allowed UNFICYP to check for landmines. He reiterated that the obstacle to the opening was the presence of the Turkish troops and not the barricade. The move was immediately welcomed by the United Nations and several world leaders.

Dimitris Christofias
Dimitris Christofias
Dimitris Christofias also Demetris is a left-wing Greek Cypriot politician and the current and sixth President of the Republic of Cyprus. Christofias was the General Secretary of AKEL and is Cyprus's first, and the European Union's first and so far only, communist head of state. He won the 2008...
was elected president of Cyprus on 24 February 2008 on a platform of solving the Cyprus problem. In his first meeting with Turkish Cypriot president Mehmet Ali Talat
Mehmet Ali Talat
Mehmet Ali Talat is the former President of the unrecognized Turkish Republic of Northern Cyprus. He was the leader of the left wing Republican Turkish Party . He became prime minister in 2004, and subsequently won the Presidential election held on 17 April 2005...
on 21 March 2008, the two leaders agreed to reopen Ledra Street "as soon as technically possible". The United Nations Development Programme "Partnership for the Future - Mine Action Centre" proceeded to clear the area of mines on 26 March 2008, and work began to shore up the buildings flanking the street to ensure that they will not pose any danger to the users of the crossing. 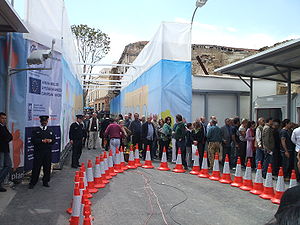 On April 3, 2008 at 9 a.m. local time (06:00 UTC), the Ledra Street roadblock crossing through the UN buffer zone was reopened after 44 years, in the presence of Greek and Turkish Cypriot officials who cut a ribbon in Kykkou street, the road between Ledra Street and what is known as Lokmaci point in the Turkish controlled part of Nicosia. Addressing the ceremony, Presidential Commissioner George Iacovou said this day is "an auspicious occasion" as it signals the opening of the fifth crossing point in Cyprus. The International Herald Tribune
International Herald Tribune
The International Herald Tribune is a widely read English language international newspaper. It combines the resources of its own correspondents with those of The New York Times and is printed at 38 sites throughout the world, for sale in more than 160 countries and territories...
reported that officials released balloons to mark the event at the end of an opening ceremony. Immediately afterwards, citizens from both sides began using the crossing.

However, later in the day at 9 p.m. local time (18:00 UTC), the Cypriot police closed off the new Ledra Street checkpoint due to a violation of the agreement by the Turkish occupation forces, whose guards penetrated deep into the UN controlled buffer zone. The incident was broadcast live on Cypriot television. A Cypriot Police source said that two Turkish Guards had refused to leave the buffer zone which was agreed to remain under full UN control. The Cypriot authorities considered the move a breach of the agreement between the Cypriot President and the leader of the Turkish Cypriot community and therefore quickly sealed off the checkpoint. After the arrival and mediation of UN officials, Turkish Cypriot forces withdrew back to their ceasefire positions and the crossing was reopened by the Cypriot Police.