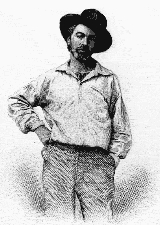 Overview
Leaves of Grass is a poetry collection by the American poet
Poetry of the United States
American poetry, the poetry of the United States, arose first as efforts by colonists to add their voices to English poetry in the 17th century, well before the constitutional unification of the thirteen colonies...
Walt Whitman
Walt Whitman
Walter "Walt" Whitman was an American poet, essayist and journalist. A humanist, he was a part of the transition between transcendentalism and realism, incorporating both views in his works. Whitman is among the most influential poets in the American canon, often called the father of free verse...
(1819–1892). Though the first edition was published in 1855, Whitman spent his entire life writing Leaves of Grass, revising it in several editions until his death. Among the poems in the collection are "Song of Myself
Song of Myself
"Song of Myself" is a poem by Walt Whitman that is included in his work Leaves of Grass. It has been credited as “representing the core of Whitman’s poetic vision.”-Publication history:...
", "I Sing the Body Electric
I Sing the Body Electric (Whitman)
"I Sing the Body Electric" is a poem by Walt Whitman from his 1855 collection Leaves of Grass.Its original publication, like the other poems in Leaves of Grass, did not have a title. In fact, the line "I sing the body electric" was not added until the 1867 edition. At the time, "electric" was not...
", and in later editions, Whitman's elegy
Elegy
In literature, an elegy is a mournful, melancholic or plaintive poem, especially a funeral song or a lament for the dead.-History:The Greek term elegeia originally referred to any verse written in elegiac couplets and covering a wide range of subject matter, including epitaphs for tombs...
to the assassinated
Abraham Lincoln assassination
The assassination of United States President Abraham Lincoln took place on Good Friday, April 14, 1865, as the American Civil War was drawing to a close. The assassination occurred five days after the commanding General of the Army of Northern Virginia, Robert E. Lee, and his battered Army of...
President
President of the United States
The President of the United States of America is the head of state and head of government of the United States. The president leads the executive branch of the federal government and is the commander-in-chief of the United States Armed Forces....
Abraham Lincoln
Abraham Lincoln
Abraham Lincoln was the 16th President of the United States, serving from March 1861 until his assassination in April 1865. He successfully led his country through a great constitutional, military and moral crisis – the American Civil War – preserving the Union, while ending slavery, and...
, "When Lilacs Last in the Dooryard Bloom'd
When Lilacs Last in the Dooryard Bloom'd
When Lilacs Last in the Dooryard Bloom'd is an elegy written by Walt Whitman shortly after the assassination of President Abraham Lincoln in 1865...
".
This book is notable for its delight in and praise of the senses during a time when such candid displays were considered immoral.

Ever and ever yet the verses owning — as, first, I here and now Signing for Soul and Body, set to them my name, Walt Whitman

Prefatory Note to "Leaves of Grass" in some editions. File:Expecting family.jpg|144px|thumb|right|The Female equally with the Male I sing.

One's-self I sing, a simple separate person, Yet utter the word Democratic, the word En-Masse. …The Female equally with the Male I sing. Of Life immense in passion, pulse, and power, Cheerful, for freest action form'd under the laws divine, The Modern Man I sing.

I too haughty Shade also sing war, and a longer and greater one than any, Waged in my book with varying fortune, with flight, advance and retreat, victory deferr'd and wavering, (Yet methinks certain, or as good as certain, at the last,) the field the world, For life and death, for the Body and for the eternal Soul, Lo, I too am come, chanting the chant of battles, I above all promote brave soldiers.

Chanter of Personality, outlining what is yet to be, I project the history of the future.

To a Historian (1860; 1871) File:Glory, spectre.jpg|144px|thumb|right|I met a seer, passing the hues and objects of the world, the fields of art and learning, pleasure, sense, to glean wikt:eidolon|eidolons.

To thee old cause! Thou peerless, passionate, good cause, Thou stern, remorseless, sweet idea, Deathless throughout the ages, races, lands, After a strange sad war, great war for thee, (I think all war through time was really fought, and ever will be really fought, for thee,) These chants for thee, the eternal march of thee.

All space, all time, (The stars, the terrible perturbations of the suns, Swelling, collapsing, ending, serving their longer, shorter use,) Fill'd with eidolons only. The noiseless myriads, The infinite oceans where the rivers empty, The separate countless free identities, like eyesight, The true realities, eidolons. Not this the world, Nor these the universes, they the universes, Purport and end, ever the permanent life of life, Eidolons, eidolons.

Thy very songs not in thy songs, No special strains to sing, none for itself, But from the whole resulting, rising at last and floating, A round full-orb'd eidolon.

Eidolons (1876) File:Moreau - Prometheus.jpg|144px|thumb|right|With time and space I him dilate and fuse the immortal laws, to make himself by them the law unto himself.