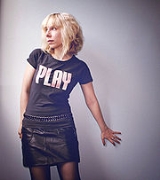 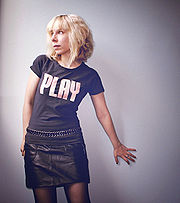 A leather skirt is a skirt
Skirt
A skirt is a tube- or cone-shaped garment that hangs from the waist and covers all or part of the legs.In the western world, skirts are usually considered women's clothing. However, there are exceptions...
made of leather
Leather
Leather is a durable and flexible material created via the tanning of putrescible animal rawhide and skin, primarily cattlehide. It can be produced through different manufacturing processes, ranging from cottage industry to heavy industry.-Forms:...
. Although durable material, the particular combination of style and material makes for a certain fashion statement. Leather skirts appear in a variety of lengths and styles.

Use varies with current trends in fashion, eg. during the 80s and 90s they were a popular item on the catwalks with popularity dwindling in the early 2000s.

Like other skirts in western culture
Western culture
Western culture, sometimes equated with Western civilization or European civilization, refers to cultures of European origin and is used very broadly to refer to a heritage of social norms, ethical values, traditional customs, religious beliefs, political systems, and specific artifacts and...
they are almost exclusively worn by women, but there are movements, such as MIS that fight for making them acceptable for everyday wear by men.
The source of this article is wikipedia, the free encyclopedia.  The text of this article is licensed under the GFDL.