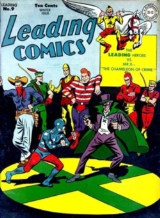 Encyclopedia
Leading Comics was a comic book
Comic book
A comic book or comicbook is a magazine made up of comics, narrative artwork in the form of separate panels that represent individual scenes, often accompanied by dialog as well as including...
published by what is now DC Comics
DC Comics
DC Comics, Inc. is one of the largest and most successful companies operating in the market for American comic books and related media. It is the publishing unit of DC Entertainment a company of Warner Bros. Entertainment, which itself is owned by Time Warner...
during the 1940s and early 1950s, a period known to fans and historians as the Golden Age of Comic Books
Golden Age of Comic Books
The Golden Age of Comic Books was a period in the history of American comic books, generally thought of as lasting from the late 1930s until the late 1940s or early 1950s...
. At the title's inception, DC was actually two companies, National Comics (later National Periodical Publications
National Publications
National Publications was one of the companies that would later become DC Comics. The corporation was originally two companies: National Allied Publications and Detective Comics.They two merged in the 1930s to become...
) and All-American Publications. National and All-American shared some ownership and advertised and co-branded their comics as if they were one company. They also collaborated on All Star Comics
All Star Comics
All Star Comics is a 1940s comic book series from All-American Publications, one of the early companies that merged with National Periodical Publications to form the modern-day DC Comics. With the exception of the first two issues, All Star Comics primarily told stories about the adventures of the...
, an All-American publication which featured the Justice Society of America
Justice Society of America
The Justice Society of America, or JSA, is a DC Comics superhero group, the first team of superheroes in comic book history. Conceived by editor Sheldon Mayer and writer Gardner Fox, the JSA first appeared in All Star Comics #3 ....
, a super hero team including characters from both companies' stables, e.g., The Spectre and Starman
Starman (Ted Knight)
Starman is a fictional comic book superhero in the , and a member of the Justice Society of America. Created by artist Jack Burnley and editors Whit Ellsworth, Murray Boltinoff, Jack Schiff, Mort Weisinger, and Bernie Breslauer, he first appeared in Adventure Comics #61 .-Fictional character...
from National, The Flash and Green Lantern
Alan Scott
Alan Scott is a fictional character, a superhero in the and the first superhero to bear the name Green Lantern.-Publication history:The original Green Lantern was created by young struggling artist Martin Nodell, who was inspired by the sight of a New York Subway employee waving a red lantern to...
from All-American.

Given the success of the JSA, National decided to develop a team title of its own -- this became Leading Comics, #1 (Winter 1941-1942) of which debuted the Seven Soldiers of Victory
Seven Soldiers of Victory
The Seven Soldiers of Victory is a fictional team of comic book superheroes in the DC Comics universe...
, a team made up exclusively of characters from National's anthology publications: More Fun Comics
More Fun Comics
More Fun Comics, originally titled New Fun: The Big Comic Magazine a.k.a. New Fun Comics, was a 1935-1947 American comic book anthology that introduced several major superhero characters and was the first American comic-book series to feature solely original material rather than reprints of...
, Adventure Comics
Adventure Comics
Adventure Comics was a comic book series published by DC Comics from 1935 to 1983 and then revamped from 2009 to 2011. In its first era, the series ran for 503 issues , making it the fifth-longest-running DC series, behind Detective Comics, Action Comics, Superman, and Batman...
, Action Comics
Action Comics
Action Comics is an American comic book series that introduced Superman, the first major superhero character as the term is popularly defined...
, Detective Comics
Detective Comics
Detective Comics is an American comic book series published monthly by DC Comics since 1937, best known for introducing the iconic superhero Batman in Detective Comics #27 . It is, along with Action Comics, the book that launched with the debut of Superman, one of the medium's signature series, and...
, and Star-Spangled Comics
Star-Spangled Comics
Star Spangled Comics was the title of a comic book series published by DC Comics which ran for 130 issues from 1941 through 1952. At that point it was retitled Star Spangled War Stories and lasted another 200+ issues until 1977.-Publication history:...
. Like its predecessor All Star Comics, each issue of Leading was taken up with a single adventure of the SSOV broken into multiple chapters, each featuring one or two heroes. However, the heroes of the SSOV were hardly the company's most popular characters -- most of those already being members of the JSA -- and the strip lasted through only the first fourteen issues of Leading. 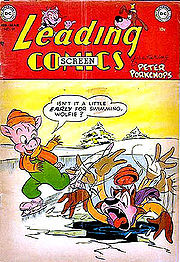 When the superhero genre faded in popularity in the late 1940s, DC Comics decided to focus more on other genres, such as science fiction
Science fiction
Science fiction is a genre of fiction dealing with imaginary but more or less plausible content such as future settings, futuristic science and technology, space travel, aliens, and paranormal abilities...
, westerns, humor and romance. Leading Comics led the charge as the first DC title to drop its superheroes. With its Summer 1945 issue, Leading switched to funny animal
Funny animal
Funny animal is a cartooning term for the genre of comics and animated cartoons in which the main characters are humanoid or talking animals, with anthropomorphic personality traits. The characters themselves may also be called funny animals...
s, with the introduction of Nero Fox (a fox
Fox
Fox is a common name for many species of omnivorous mammals belonging to the Canidae family. Foxes are small to medium-sized canids , characterized by possessing a long narrow snout, and a bushy tail .Members of about 37 species are referred to as foxes, of which only 12 species actually belong to...
who was billed as the "jive-jumpin' emperor of ancient Rome
Ancient Rome
Ancient Rome was a thriving civilization that grew on the Italian Peninsula as early as the 8th century BC. Located along the Mediterranean Sea and centered on the city of Rome, it expanded to one of the largest empires in the ancient world....
"). In issue #23 (March 1947), Nero Fox was dropped as the cover-featured first story in each issue, to be replaced by Peter Porkchops
Peter Porkchops
Peter Porkchops is a fictional funny animal pig who appeared in stories published by DC Comics. Peter was created by Otto Feuer, and first appeared in Leading Comics #23 .-Golden and Silver Ages:...
, a pig
Pig
A pig is any of the animals in the genus Sus, within the Suidae family of even-toed ungulates. Pigs include the domestic pig, its ancestor the wild boar, and several other wild relatives...
(created by Otto Feuer), in his first appearance. Peter appeared in Leading Comics (retitled Leading Screen Comics in 1950) regularly until issue #62 (September 1955).