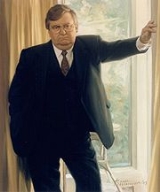 I think Scowcroft has done us all a great favor by his article saying don't do it. My own personal view is that basically General Scowcroft is correct. Unless the president can make a very compelling case that Saddam Hussein has his finger on a weapon of mass destruction and is about ready to use it, I do not think that now is the time to go to war against Saddam Hussein.

He had three sons, all of whom are named Lawrence Eagleburger, though they have different middle names. The eldest is from his first marriage, which ended in divorce. The other two are from his second marriage, which was to Marlene Heinemann from 1966 until her death in 2010.

Following Nixon's resignation, he briefly left government service, but was soon appointed as ambassador to Yugoslavia
Yugoslavia
Yugoslavia refers to three political entities that existed successively on the western part of the Balkans during most of the 20th century....
by President Jimmy Carter, a post he held from 1977 to 1980.

His period as advisor for Yugoslavian affairs from 1989 to 1992 was highly controversial. He gained a reputation for being a strong Serbia
Serbia
Serbia , officially the Republic of Serbia , is a landlocked country located at the crossroads of Central and Southeast Europe, covering the southern part of the Carpathian basin and the central part of the Balkans...
n partisan, most controversially denying that Serbian paramilitaries and the Yugoslav National Army had committed atrocities in the breakaway republic of Croatia
Croatia
Croatia , officially the Republic of Croatia , is a unitary democratic parliamentary republic in Europe at the crossroads of the Mitteleuropa, the Balkans, and the Mediterranean. Its capital and largest city is Zagreb. The country is divided into 20 counties and the city of Zagreb. Croatia covers ...
. This perceived partisanship led the European press to dub him Lawrence of Serbia (a reference to Lawrence of Arabia).

Eagleburger became chairman of the International Commission on Holocaust Era Insurance Claims
International Commission on Holocaust Era Insurance Claims
The International Commission on Holocaust Era Insurance Claims was established by the National Association of Insurance Commissioners in August 1998 to identify, settle, and pay individual Holocaust era insurance claims at no cost to claimants....
, or ICHEIC, which was set up in 1998. The purpose of the Commission was to resolve unpaid Nazi-era insurance
Insurance
In law and economics, insurance is a form of risk management primarily used to hedge against the risk of a contingent, uncertain loss. Insurance is defined as the equitable transfer of the risk of a loss, from one entity to another, in exchange for payment. An insurer is a company selling the...
claims for survivors of the Holocaust. In 2005, Eagleburger announced that the ICHEIC was offering approximately 16 million dollars to Holocaust victims and their heirs, noting as he did so the research ability of the ICHEIC staff which allowed them to evaluate claims from companies which no longer existed. In the years prior to this there had been some controversy about the Commission, including reports that it was over-budgeted and too slow, and that insurance companies which had previously agreed to work with the ICHEIC had failed to disclose policyholder lists. Eagleburger responded to these accusations by saying, among other things, that it was difficult to work quickly when many of the claimants lacked basic information such as the name of the insurance company involved.

After serving in the Foreign Service
United States Foreign Service
The United States Foreign Service is a component of the United States federal government under the aegis of the United States Department of State. It consists of approximately 11,500 professionals carrying out the foreign policy of the United States and aiding U.S...
for 27 years, Eagleburger retained an interest in foreign policy and was a familiar figure on current events talk shows. He caused some discussion with public comments about President George W. Bush's foreign policy. In August 2002, Eagleburger questioned the timing of possible military action in Iraq
Iraq
Iraq ; officially the Republic of Iraq is a country in Western Asia spanning most of the northwestern end of the Zagros mountain range, the eastern part of the Syrian Desert and the northern part of the Arabian Desert....
, saying, "I am not at all convinced now that this is something we have to do this very moment." He did indicate he believed that Iraqi regime change could be a legitimate U.S. endeavor at some point, but that at that time he did not believe the administration was fully prepared for such a conflict. In April 2003, following warnings by the Bush administration to the government of Syria
Syria
Syria , officially the Syrian Arab Republic , is a country in Western Asia, bordering Lebanon and the Mediterranean Sea to the West, Turkey to the north, Iraq to the east, Jordan to the south, and Israel to the southwest....
, Eagleburger condemned the possibility of military action in Syria or Iran
Iran
Iran , officially the Islamic Republic of Iran , is a country in Southern and Western Asia. The name "Iran" has been in use natively since the Sassanian era and came into use internationally in 1935, before which the country was known to the Western world as Persia...
, saying that public opinion would not support such a move and that "If President Bush were to try it now, even I would feel he should be skinned alive."

On January 5, 2006, he participated in a meeting at the White House
White House
The White House is the official residence and principal workplace of the president of the United States. Located at 1600 Pennsylvania Avenue NW in Washington, D.C., the house was designed by Irish-born James Hoban, and built between 1792 and 1800 of white-painted Aquia sandstone in the Neoclassical...
of former Secretaries of Defense and State to discuss United States foreign policy with Bush administration officials. On November 10, 2006 it was announced that he would replace Secretary of Defense
United States Secretary of Defense
The Secretary of Defense is the head and chief executive officer of the Department of Defense of the United States of America. This position corresponds to what is generally known as a Defense Minister in other countries...
designate Robert Gates
Robert Gates
Dr. Robert Michael Gates is a retired civil servant and university president who served as the 22nd United States Secretary of Defense from 2006 to 2011. Prior to this, Gates served for 26 years in the Central Intelligence Agency and the National Security Council, and under President George H. W....
in the Iraq Study Group
Iraq Study Group
The Iraq Study group , was a ten-person bipartisan panel appointed on March 15, 2006, by the United States Congress, that was charged with assessing the situation in Iraq and the US-led Iraq War and making policy recommendations...
.

After the election of Iranian president Mahmoud Ahmadinejad, Eagleburger seemed to think that Iran was moving in a direction which may at some point call for military action, saying in an interview that while "we should try everything else we can first," at some point it would probably be necessary to use force to ensure that Iran did not obtain or use nuclear weapons.

Before Republican primaries, Eagleburger endorsed John McCain
John McCain
John Sidney McCain III is the senior United States Senator from Arizona. He was the Republican nominee for president in the 2008 United States election....
for President. In an NPR
NPR
NPR, formerly National Public Radio, is a privately and publicly funded non-profit membership media organization that serves as a national syndicator to a network of 900 public radio stations in the United States. NPR was created in 1970, following congressional passage of the Public Broadcasting...
interview on October 30, 2008, he described McCain's running-mate Sarah Palin
Sarah Palin
Sarah Louise Palin is an American politician, commentator and author. As the Republican Party nominee for Vice President in the 2008 presidential election, she was the first Alaskan on the national ticket of a major party and first Republican woman nominated for the vice-presidency.She was...
as "not prepared" for top office. He also stated that many Vice Presidents have not been ready. The next day, in an interview on Fox News, he retracted his comments about Palin.

On October 30, 2008, on the Fox News Channel
Fox News Channel
Fox News Channel , often called Fox News, is a cable and satellite television news channel owned by the Fox Entertainment Group, a subsidiary of News Corporation...
, Eagleburger referred to Democratic presidential nominee Barack Obama
Barack Obama
Barack Hussein Obama II is the 44th and current President of the United States. He is the first African American to hold the office. Obama previously served as a United States Senator from Illinois, from January 2005 until he resigned following his victory in the 2008 presidential election.Born in...
as a "charlatan
Charlatan
A charlatan is a person practicing quackery or some similar confidence trick in order to obtain money, fame or other advantages via some form of pretense or deception....
", citing his fundraising methods and other aspects of his presidential campaign.

Eagleburger died of pneumonia at the University of Virginia Medical Center in Charlottesville, Virginia. He was 80 and had lived outside Charlottesville since 1990. He is survived by his three sons.