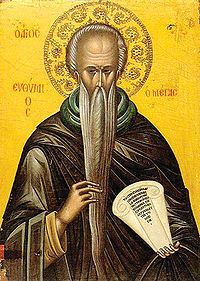 The Laura of Euthymius was a laura
Lavra
In Orthodox Christianity and certain other Eastern Christian communities Lavra or Laura originally meant a cluster of cells or caves for hermits, with a church and sometimes a refectory at the center...
in Palestine
Palestine
Palestine is a conventional name, among others, used to describe the geographic region between the Mediterranean Sea and the Jordan River, and various adjoining lands....
founded by Saint Euthymius the Great
Euthymius the Great
Saint Euthymius , often styled the Great, was an Abbot in Palestine.Venerated in both Roman Catholic and Eastern Orthodox Churches.-Biography:He was born in Melitene in Lesser Armenia...
in 420.

The site was abandoned in the 12th century. In the 13th century, it was converted into a travellers' inn, Khan al-Ahmar
Khan Al-Ahmar
Khan al-Ahmar is a Bedouin encampment in the West Bank, between the Israeli settlements Ma'ale Adumim and Kfar Adumim. In 2010, there were 100 Bedouin living there in tents and ramshackle huts....
, a caravanserai
Caravanserai
A caravanserai, or khan, also known as caravansary, caravansera, or caravansara in English was a roadside inn where travelers could rest and recover from the day's journey...
for pilgrims on the route between Jerusalem and Mecca
Mecca
Mecca is a city in the Hijaz and the capital of Makkah province in Saudi Arabia. The city is located inland from Jeddah in a narrow valley at a height of above sea level...
via Nabi Musa
Nabi Musa
Nabi Musa is the name of a site in the Judean desert that popular Palestinian folklore associates with Moses. It is also the name of a seven-day long religious festival that was celebrated annually by Palestinian Muslims, beginning on the Friday before Good Friday in the old Orthodox Greek calendar...
. The site is near Mishor Adumim
Mishor Adumim
Mishor Adumim is an industrial park located in the industrial zone of Ma'aleh Adumim, about 10 minutes from Jerusalem, Israel.Since 1998, the park has been managed by the Ma'aleh Adumim Economic Development Company Ltd...
, the industrial zone of Ma'ale Adumim.

The Laura at Euthymius was essential in the advancement and organisation of the sabaite (desert monastic) movement, and was central to the development of the non-Chalcedonian
Chalcedonian Creed
The Confession of Chalcedon , also known as the Doctrine of the Hypostatic Union or the Two-Nature Doctrine, was adopted at the Council of Chalcedon in 451 in Asia Minor. That Council of Chalcedon is one of the first seven Ecumenical Councils accepted by Eastern Orthodox, Catholic, and many...
orthodoxy and miaphysism within Palestinian monasticism and Oriental Orthodoxy
Oriental Orthodoxy
Oriental Orthodoxy is the faith of those Eastern Christian Churches that recognize only three ecumenical councils — the First Council of Nicaea, the First Council of Constantinople and the First Council of Ephesus. They rejected the dogmatic definitions of the Council of Chalcedon...
of the Eastern Orthodox Church
Eastern Orthodox Church
The Orthodox Church, officially called the Orthodox Catholic Church and commonly referred to as the Eastern Orthodox Church, is the second largest Christian denomination in the world, with an estimated 300 million adherents mainly in the countries of Belarus, Bulgaria, Cyprus, Georgia, Greece,...
.
The source of this article is wikipedia, the free encyclopedia.  The text of this article is licensed under the GFDL.