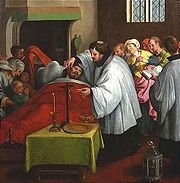 The Last Rites are the very last prayers and ministrations given to many Christians before death. The last rites go by various names and include different practices in different Christian traditions. They may be administered to those awaiting execution
Death row
Death row signifies the place, often a section of a prison, that houses individuals awaiting execution. The term is also used figuratively to describe the state of awaiting execution , even in places where no special facility or separate unit for condemned inmates exists.After individuals are found...
, mortally wounded
Mortal Wound
A mortal wound is a very severe and serious injury whether accidental or inflicted intentionally , which leads directly to the death of the victim. Death need not be instantaneous, but follows soon after...
or terminally ill
Terminal illness
Terminal illness is a medical term popularized in the 20th century to describe a disease that cannot be cured or adequately treated and that is reasonably expected to result in the death of the patient within a short period of time. This term is more commonly used for progressive diseases such as...
.
The term is used by some Christians outside the Roman Catholic Church, such as Anglicans (Church of England).


In the Roman Catholic Church

The ministration known as the Last Rites in the Catholic Church does not constitute a distinct sacrament
Sacrament
A sacrament is a sacred rite recognized as of particular importance and significance. There are various views on the existence and meaning of such rites.-General definitions and terms:...
in itself. It is rather a set of sacraments given to people who are extremely ill and believed to be near death. These are the sacraments of Anointing of the Sick
Anointing of the Sick
Anointing of the Sick, known also by other names, is distinguished from other forms of religious anointing or "unction" in that it is intended, as its name indicates, for the benefit of a sick person...
(which, in spite of not being reserved for the dying, is sometimes mistakenly supposed to be what is meant by "the Last Rites"), Penance
Penance
Penance is repentance of sins as well as the proper name of the Roman Catholic, Orthodox Christian, and Anglican Sacrament of Penance and Reconciliation/Confession. It also plays a part in non-sacramental confession among Lutherans and other Protestants...
and the Eucharist
Eucharist
The Eucharist , also called Holy Communion, the Sacrament of the Altar, the Blessed Sacrament, the Lord's Supper, and other names, is a Christian sacrament or ordinance...
. If all three are administered immediately one after another, the normal order of administration is: first Penance then Anointing, then Viaticum.

The Last Rites are meant to prepare the dying person's soul for death, by providing absolution for sins by penance, sacramental grace and prayers for the relief of suffering through anointing, and the final administration of the Eucharist, known as "Viaticum
Viaticum
Viaticum is a term used especially in the Roman Catholic Church for the Eucharist administered, with or without anointing of the sick, to a person who is dying, and is thus a part of the last rites...
," which is Latin for "provision for the journey."

Within that part, the chapter on Viaticum is followed by two more chapters, one on Commendation of the Dying, with short texts, mainly from the Bible, a special form of the litany of the saints, and other prayers, and the other on Prayers for the Dead. A final chapter provides Rites for Exceptional Circumstances, namely, the Continuous Rite of Penance, Anointing, and Viaticum, Rite for Emergencies, and Christian Initiation for the Dying. The last of these concerns the administration of Baptism and Confirmation to those who have not received these sacraments.

In the Orthodox Church

In the Orthodox Church and those Eastern Catholic Churches which follow the Rite of Constantinople, the last rites consist of the Sacred Mysteries
Sacred Mysteries
The term sacred mysteries generally denotes the area of supernatural phenomena associated with a divinity or a religious ideology.-Pre-Christian religious mysteries:...
(sacraments) of Confession
Confession
This article is for the religious practice of confessing one's sins.Confession is the acknowledgment of sin or wrongs...
and the reception of Holy Communion.

Following these sacraments, when a person dies, there are a series of prayers known as The Office at the Parting of the Soul From the Body. This consists of a blessing
Blessing
A blessing, is the infusion of something with holiness, spiritual redemption, divine will, or one's hope or approval.- Etymology and Germanic paganism :...
by the priest, the usual beginning
Usual beginning
The usual beginning is the series of prayers with which most Divine Services begin in the Eastern Orthodox Church and those Eastern Catholic Churches which follow the Byzantine Rite.-Normal form:...
, and after the Lord's Prayer
Lord's Prayer
The Lord's Prayer is a central prayer in Christianity. In the New Testament of the Christian Bible, it appears in two forms: in the Gospel of Matthew as part of the discourse on ostentation in the Sermon on the Mount, and in the Gospel of Luke, which records Jesus being approached by "one of his...
, Psalm 50
Psalm 51
Psalm 51 , traditionally referred to as the Miserere, its Latin incipit, is one of the Penitential Psalms. It begins: Have mercy on me, O God....
. Then a Canon
Canon (hymnography)
A canon is a structured hymn used in a number of Eastern Orthodox services. It consists of nine odes, sometimes called canticles or songs depending on the translation, based on the Biblical canticles. Most of these are found in the Old Testament, but the final ode is taken from the Magnificat and...
to the Theotokos
Theotokos
Theotokos is the Greek title of Mary, the mother of Jesus used especially in the Eastern Orthodox, Oriental Orthodox, and Eastern Catholic Churches. Its literal English translations include God-bearer and the one who gives birth to God. Less literal translations include Mother of God...
is chanted, entitled, "On behalf of a man whose soul is departing, and who cannot speak". This is an elongated poem speaking in the person of the one who is dying, asking for forgiveness of sin, the mercy of God, and the intercession
Intercession
Intercession is the act of interceding between two parties. In both Christian and Islamic religious usage, it is a prayer to God on behalf of others....
of the saint
Saint
A saint is a holy person. In various religions, saints are people who are believed to have exceptional holiness.In Christian usage, "saint" refers to any believer who is "in Christ", and in whom Christ dwells, whether in heaven or in earth...
s. The rite is concluded by three prayers said by the priest, the last one being said "at the departure of the soul."

There is an alternative rite known as The Office at the Parting of the Soul from the Body When a Man has Suffered for a Long Time. The outline of this rite is the same as above, except that Psalm 70 and Psalm 143 precede Psalm 50, and the words of the canon and the prayers are different.

The rubric
Rubric
A rubric is a word or section of text which is traditionally written or printed in red ink to highlight it. The word derives from the , meaning red ochre or red chalk, and originates in Medieval illuminated manuscripts from the 13th century or earlier...
in the Book of Needs (priest's service book) states, "With respect to the Services said at the parting of the soul, we note that if time does not permit to read the whole Canon, then customarily just one of the prayers, found at the end of the Canon, is read by the Priest at the moment of the parting of the soul from the body."

As soon as the person has died the priest begins The Office After the Departure of the Soul From the Body (also known as The First Pannikhida).

In the Orthodox Church Holy Unction is not considered to be solely a part of a person's preparation for death, but is administered to any Orthodox Christian who is ill, physically or spiritually, to ask for God's mercy and forgiveness of sin. There is an abbreviated form of Holy Unction to be performed for a person in imminent danger of death, but it should not replace the full rite in other cases.