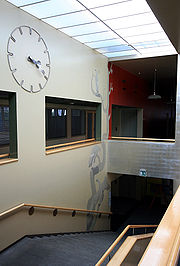 Lasipalatsi is a functionalist
Functionalism (architecture)
Functionalism, in architecture, is the principle that architects should design a building based on the purpose of that building. This statement is less self-evident than it first appears, and is a matter of confusion and controversy within the profession, particularly in regard to modern...
office building designed in the 1930s, located on Mannerheimintie
Mannerheimintie
Mannerheimintie , or Mannerheimvägen , named after the Finnish military leader and statesman Carl Gustaf Emil Mannerheim, is one of the most famous streets in Helsinki, Finland. It was originally named Heikinkatu , after Robert Henrik Rehbinder, but was renamed after the Winter War...
in the Kamppi
Kamppi
Kamppi is a neighbourhood in the centre of Helsinki, the capital of Finland. The name originally referred to a small area known as the "Kamppi field" , but according to the current official designation, "Kamppi" encompasses a much larger area with a population of 10,000 in 2004.The heart of Kamppi...
district of Helsinki
Helsinki
Helsinki is the capital and largest city in Finland. It is in the region of Uusimaa, located in southern Finland, on the shore of the Gulf of Finland, an arm of the Baltic Sea. The population of the city of Helsinki is , making it by far the most populous municipality in Finland. Helsinki is...
, Finland
Finland
Finland , officially the Republic of Finland, is a Nordic country situated in the Fennoscandian region of Northern Europe. It is bordered by Sweden in the west, Norway in the north and Russia in the east, while Estonia lies to its south across the Gulf of Finland.Around 5.4 million people reside...
. Lasipalatsi is one of Helsinki's most notable functionalist buildings.

An earlier building at the same location was the Turku barracks, which was destroyed in the Finnish Civil War
Finnish Civil War
The Finnish Civil War was a part of the national, political and social turmoil caused by World War I in Europe. The Civil War concerned control and leadership of The Grand Duchy of Finland as it achieved independence from Russia after the October Revolution in Petrograd...
in 1918. Lasipalatsi, designed by three young architects Viljo Revell
Viljo Revell
Viljo Revell was a Finnish architect of the functionalist school. Internationally Revell is best known for designing the Toronto City Hall....
, Heimo Riihimäki and Niilo Kokko, was built on the same site in 1936. Lasipalatsi, containing office
Office
An office is generally a room or other area in which people work, but may also denote a position within an organization with specific duties attached to it ; the latter is in fact an earlier usage, office as place originally referring to the location of one's duty. When used as an adjective, the...
s, restaurant
Restaurant
A restaurant is an establishment which prepares and serves food and drink to customers in return for money. Meals are generally served and eaten on premises, but many restaurants also offer take-out and food delivery services...
s and a film theatre, was originally designed as a temporary building, later to be torn down to allow a larger office building to be constructed in its place. The Varuboden grocery, Oy Siemens AB and the HOK ice cream bar
Ice cream bar
An ice cream bar is a frozen dessert on a stick or a candy bar that has ice cream in it. The coating is usually a thin layer of chocolate used to prevent the melting and dripping of ice cream.-History:...
were Lasipalatsi's most prominent businesses for decades. At the time of its opening, the film theatre Bio Rex was one of the biggest film theatres in the city, and many formal premieres of Finnish films were shown there.

The original plans to tear down Lasipalatsi were postponed decade after decade, but the building also wasn't renovated, because its final fate was still left open. In the 1980s, large sheets advertising the Ale Pub underlined the shameful state of the worn building. Only when the Board of Construction set a threat fee, the Apartment Bureau renovated the building's outer walls. In summer 1985, the old grayish paint was replaced with through-coloured white mortar. Helsinkians opposed the destruction of the building several times, and the Museum Bureau also supported its protection.

After decades of deterioration, Lasipalatsi was protected and renovated into a culture and media centre in 1998, also containing café
Café
A café , also spelled cafe, in most countries refers to an establishment which focuses on serving coffee, like an American coffeehouse. In the United States, it may refer to an informal restaurant, offering a range of hot meals and made-to-order sandwiches...
s and many corporations in the media business. The building also hosts Internet
Internet
The Internet is a global system of interconnected computer networks that use the standard Internet protocol suite to serve billions of users worldwide...
services and exhibition halls. The Yleisradio
Yleisradio
The Finnish Broadcasting Company , abbreviated to YLE , is Finland's national broadcasting company, founded in 1926. YLE is a public-broadcasting organization which shares many of its characteristics with its British counterpart, the BBC, on which it was largely modelled...
Morning TV used to be broadcast from Lasipalatsi, and next to it is the Yle Shop. The film theatre Bio Rex is specialised in showing non-mainstream cultural films.