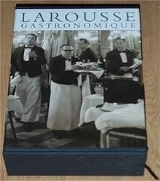 Encyclopedia
Larousse Gastronomique is an encyclopedia
Encyclopedia
An encyclopedia is a type of reference work, a compendium holding a summary of information from either all branches of knowledge or a particular branch of knowledge....
of gastronomy
Gastronomy
Gastronomy is the art or science of food eating. Also, it can be defined as the study of food and culture, with a particular focus on gourmet cuisine...
. The majority of the book is about French cuisine
French cuisine
French cuisine is a style of food preparation originating from France that has developed from centuries of social change. In the Middle Ages, Guillaume Tirel , a court chef, authored Le Viandier, one of the earliest recipe collections of Medieval France...
, and contains recipes for French dishes and cooking techniques. Many non-French dishes and ingredients are mentioned and in later editions these entries have increased in number.

The first edition (1938) was edited by Prosper Montagné
Prosper Montagné
Prosper Montagné was a French chef and author of many books and articles on food, cooking, and gastronomy, notably the Larousse Gastronomique....
, with prefaces by Georges Auguste Escoffier and Philéas Gilbert. Gilbert was a collaborator in the creation of this book as well as Le Guide Culinaire
Le Guide Culinaire
Georges Auguste Escoffier's Le Guide culinaire, pronounced , is a pivotal book in the history of European haute cuisine, being Escoffier's largely successful attempt to codify and streamline the common French restaurant food of the day. The first edition was printed in 1903 in French. It was...
with Escoffier, leading to some cross-over with the two books. It caused Escoffier to note when he was asked to write the preface that he could "see with my own eyes," and "Montagné cannot hide from me the fact that he has used Le Guide as a basis for his new book, and certainly used numerous recipes."


Translations and other editions

The book was translated into English in 1961.

The third edition (2001), which runs to approximately 1350 pages has been modernized and includes additional material on other cuisine
Cuisine
Cuisine is a characteristic style of cooking practices and traditions, often associated with a specific culture. Cuisines are often named after the geographic areas or regions that they originate from...
s. It is also available in a concise edition (2003). A new, updated and revised edition was released on 13 October, 2009 published by Hamlyn in the UK.