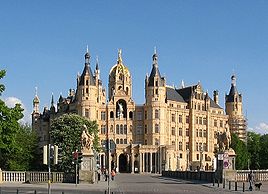 The Landtag of Mecklenburg-Vorpommern (Mecklenburg-West Pomerania) is the state diet
Diet (assembly)
In politics, a diet is a formal deliberative assembly. The term is mainly used historically for the Imperial Diet, the general assembly of the Imperial Estates of the Holy Roman Empire, and for the legislative bodies of certain countries.-Etymology:...
of the German federal state of Mecklenburg-Vorpommern (Mecklenburg-Western Pomerania). It convenes in Schwerin
Schwerin
Schwerin is the capital and second-largest city of the northern German state of Mecklenburg-Vorpommern. The population, as of end of 2009, was 95,041.-History:...
and currently consists of 71 members of five Parties. The current majority is a coalition of the Social Democratic Party
Social Democratic Party of Germany
The Social Democratic Party of Germany is a social-democratic political party in Germany...
and the Christian Democratic Union
Christian Democratic Union (Germany)
The Christian Democratic Union of Germany is a Christian democratic and conservative political party in Germany. It is regarded as on the centre-right of the German political spectrum...
, supporting the cabinet of Minister-President
Minister-President
A minister-president is the head of government in a number of European countries or subnational governments, in which a parliamentary or semi-presidential system of government prevails, who presides over the council of ministers...
Erwin Sellering
Erwin Sellering
Erwin Sellering, born on 18 October 1949 in Sprockhövel near Bochum and currently residing in Greifswald, is Minister-president of the German federal state of Mecklenburg-Vorpommern since 2008....
.

The main functions of the Landtag are the election of the Minister-President, the passage of laws controlling the state government.

After the elections of September 4, 2011, the composition of the Landtag is as follows:

Elections are conducted using a proportional representation system, with a minimum of 5% vote share to receive any seats.


Presidents of the Landtag