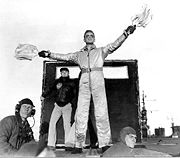 Landing Signal Officers (LSOs) are naval aviator
Naval Aviator
A United States Naval Aviator is a qualified pilot in the United States Navy, Marine Corps or Coast Guard.-Naming Conventions:Most Naval Aviators are Unrestricted Line Officers; however, a small number of Limited Duty Officers and Chief Warrant Officers are also trained as Naval Aviators.Until 1981...
s specially trained to facilitate the "safe and expeditious recovery" of naval aircraft aboard aircraft carriers. Originally LSOs were responsible for bringing aircraft aboard ship using hand signals. Since the introduction of Optical Landing System
Optical Landing System
An optical landing system is used to give glidepath information to pilots in the terminal phase of landing on an aircraft carrier...
s in the 1950s, LSOs assist pilots by giving information via radio handsets.

In the U.S. Navy, aircraft carrier operations began with USS Langley (CV-1)
USS Langley (CV-1)
USS Langley was the United States Navy's first aircraft carrier, converted in 1920 from the collier USS Jupiter , and also the U.S. Navy's first electrically propelled ship...
in 1922. Langleys initial flight operations were on an experimental basis to learn what worked and what didn't. The first pilots had no signaling system for assistance from shipboard personnel. Langleys first executive officer, Kenneth Whiting, had a hand-cranked movie camera film every landing to aid in evaluation of landing technique. When not flying, Commander Whiting observed all landings from the aft port corner of the flight deck. Commander Whiting's position remained visible to landing pilots in critical touchdown attitudes when the nose of the aircraft might obscure the pilot's view straight ahead. Pilots found Commander Whiting's body language helpful and suggested an experienced pilot be assigned to occupy that position, using agreed signals which evolved with experience. These Landing Signal Officers or Landing Safety Officers (LSOs) faced the incoming plane and held colored flags for improved visibility. Because LSOs used colored paddles, flags, or wands well into the jet age, the officers became unofficially known as "paddles" (US), or "batsmen" (UK). They are still referred thus to this day, and the LSO trade is referred to as "waving".

From the 1920s into the 1950s, U.S. and Royal Navy LSOs used a variety of signals to assist pilots landing aboard aircraft carriers. The signals provided information on lineup with the deck, height relative to proper glide slope, angle of attack
Angle of attack
Angle of attack is a term used in fluid dynamics to describe the angle between a reference line on a lifting body and the vector representing the relative motion between the lifting body and the fluid through which it is moving...
(fast or slow), and whether the plane's tailhook
Tailhook
A tailhook, also arresting hook or arrester hook, is a device attached to the empennage of some military fixed wing aircraft...
and wheels were down.

The final signal was "the cut" (a slashing motion at the throat) ordering the pilot to reduce power and land the aircraft. In a properly executed landing, the aircraft's tailhook snagged an arresting wire that brought the plane to a halt.
A "waveoff" was a mandatory order to abort the landing and go around for another attempt. Sometimes a proper approach drew a waveoff if the deck was "fouled" with aircraft or personnel in the landing area.

US vs UK LSOs

The difference between American and British LSOs was the nature of their signals. Generally, U.S. Navy signals were advisory, indicating whether the plane was on glide slope, too high, too low, etc. Royal Navy signals were usually mandatory, ordering the pilot to add power, come port, etc. When "crossdecking" with one another, the two navies had to decide whether to use the U.S. or British system.

In contrast, the Imperial Japanese Navy
Imperial Japanese Navy
The Imperial Japanese Navy was the navy of the Empire of Japan from 1869 until 1947, when it was dissolved following Japan's constitutional renunciation of the use of force as a means of settling international disputes...
had no LSOs. Instead, its carriers employed a system of colored lights much like today's general aviation
General aviation
General aviation is one of the two categories of civil aviation. It refers to all flights other than military and scheduled airline and regular cargo flights, both private and commercial. General aviation flights range from gliders and powered parachutes to large, non-scheduled cargo jet flights...
Runway edge lights
Runway Edge Lights
Runway Edge Lights are used to outline the edges of runways during periods of darkness or restricted visibility conditions. These light systems are classified according to the intensity they are capable of producing:...
at most airports. However, each Japanese carrier assigned a sailor to wave a red flag in case a landing was to be aborted.

From the late 1950s, carriers evolved from the original straight or axial-deck configuration into the angled flight deck, with Optical Landing System
Optical Landing System
An optical landing system is used to give glidepath information to pilots in the terminal phase of landing on an aircraft carrier...
s providing correct glide slope information to the pilot. Initially, the device was thought able to allow the pilot to land without direction from the LSO. However, accident rates actually increased upon the system's initial introduction, so the current system of using both the OLS and the LSO was developed. This development, along with other safety improvements, contributed to the US carrier landing accident rate plummeting from 35 per 10,000 landings in 1954 to 7 per 10,000 landings in 1957.

Together with the OLS, the LSO provides input to the pilot via a radio handset (that looks like a telephone handset), advising of power requirements, position relative to glide path and centerline. The LSO also holds a “pickle” switch that controls a combination of lights attached to the OLS to indicate "go around" using the bright red, flashing wave off lights. Additional signals, such as "cleared to land", "add power", or "divert" can be signaled using with a row of green "cut" lights or a combination thereof. Often, pictures of LSOs show them holding the pickle switch over their head. This is done as a visual reminder to the LSOs that the deck is “fouled” with aircraft or personnel in the landing area. Once the deck becomes “clear”, the LSOs are free to lower the pickle.

LSOs have been rated carrier pilots since the end of World War II, but during the war the need was such that some non-aviators were trained. Because of the importance of LSOs, the duty offers great responsibility for junior officers, generally lieutenants (junior grade) to lieutenant commander. Prospective LSOs are selected among junior pilots from each fixed wing carrier squadron. The first qualification they receive is a “field qualification,” which allows them to wave aircraft at shore runways during Field Carrier Landing Practice (FCLPs). The LSO next attends the LSO School at NAS Oceana, Virginia, for Initial Formal Ground Training. Additional qualifications include:

LSOs typically work in teams aboard ship. In an example arrangement, four teams of 6-8 LSOs would fly for three days, then wave on the fourth day.

All LSOs work directly for the Air Wing LSO (aka “Cag Paddles”), who is ultimately responsible the safe and expeditious recovery of aircraft, and for training/qualifying junior LSOs. There are typically two Air Wing LSOs per airwing, and one of them is on the LSO platform for every landing.

The Controlling LSO is primarily responsible for aircraft glideslope and angle of attack. He also issues a “grade” for each landing.

The Backup LSO is typically more experienced than the Controlling LSO, and is primarily responsible for aircraft lineup and ensuring that the landing area is clear. He helps in the grading.

LSOs do their waving from the LSO Platform, which is on the port side of the ship aft of the port side aircraft elevator. It is protected by a wind deflector, and has an “escape area” that deck personnel can jump into in an emergency. The platform is outfitted with communications gear, deck status and ship indications, as well as controls for the OLS.

The LSO work station consists of three (3) pickle switches; a wind screen; LSO Base Console; and Heads Up Display unit. Each ship's configuration may vary in some small degree.

Every carrier landing made by US pilots is graded for safety and technique, using a complex shorthand to denote what each aircraft did during various phases of each approach.
Approaches are divided into parts:

Deviations from optimal glideslope, centerline, and angle of attack are noted for each phase, resulting in an overall grade. Grades are debriefed to each pilot by the LSO teams after each cycle. Average grades are computed for each pilot, resulting in a highly competitive “pecking order” of pilot landing skill throughout the airwing.

It is a common misconception that pilots are graded based on the wire their tailhook catches on the pass. LSOs don't look at where the plane landed, they look at how it got there. It is possible for a pilot to fly a safe pass and land on a 1 wire, it is also possible that a plane catches a 3 wire and the landing is unsafe. Under normal circumstances, on Nimitz class carriers the targeted hook touchdown point is halfway between the two wire and the three wire.

LSOs grade the pass and write a comment, in shorthand, for use in the LSO-Pilot de-brief. An example comment might read, "High, slightly overshooting start, fly through down on comeback in the middle, low in close to at the ramp. Fair-2.", meaning that the aircraft was high at the start of the approach, and it had slightly overshot the landing area centerline. As the pilot corrected to centerline, he did not add enough power so he flew through the glideslope from high to low. The LSO likely would have given the pilot a signal at this time to add power. For the last portion of the approach, the aircraft remained below glideslope (but was on centerline because of the lack of a comment), touching down prior to the target 3-wire. The pilot caught the 2 wire, and received a grade of "fair".

The LSO in popular culture is romantically represented by "Beer Barrel", the colorful officer in James Michener's best-seller The Bridges at Toko-Ri
The Bridges at Toko-Ri
The Bridges at Toko-Ri is a 1954 film based on a novel by James Michener about a naval aviator assigned to bomb a group of heavily defended bridges during the Korean War. It was made into a motion picture by Paramount Pictures and won the Special Effects Oscar at the 28th Academy Awards...
. Actor Robert Strauss
Robert Strauss (actor)
Robert Strauss was a gravel-voiced American actor.-Career:Strauss began his career as a classical actor, appearing in The Tempest and Macbeth on Broadway in 1930...
played the role in the 1954 motion picture.

G.I. Joe
G.I. Joe
G.I. Joe is a line of action figures produced by the toy company Hasbro. The initial product offering represented four of the branches of the U.S. armed forces with the Action Soldier , Action Sailor , Action Pilot , Action Marine and later on, the Action Nurse...
produced a 1/6 scale uniform and accessories for the LSO.
The source of this article is wikipedia, the free encyclopedia.  The text of this article is licensed under the GFDL.