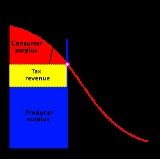 Overview
A land value tax is a levy on the unimproved value of land
Land (economics)
In economics, land comprises all naturally occurring resources whose supply is inherently fixed. Examples are any and all particular geographical locations, mineral deposits, and even geostationary orbit locations and portions of the electromagnetic spectrum. Natural resources are fundamental to...
. It is an ad valorem tax
Tax
To tax is to impose a financial charge or other levy upon a taxpayer by a state or the functional equivalent of a state such that failure to pay is punishable by law. Taxes are also imposed by many subnational entities...
on land that disregards the value of buildings, personal property
Personal property
Personal property, roughly speaking, is private property that is moveable, as opposed to real property or real estate. In the common law systems personal property may also be called chattels or personalty. In the civil law systems personal property is often called movable property or movables - any...
and other improvements
Land improvement
Land improvement or land amelioration refers to investments making land more usable by humans. In terms of accounting, land improvements refer to any variety of projects that increase the value of the property...
. A land value tax (LVT) is different from other property tax
Property tax
A property tax is an ad valorem levy on the value of property that the owner is required to pay. The tax is levied by the governing authority of the jurisdiction in which the property is located; it may be paid to a national government, a federated state or a municipality...
es, because these are taxes on the whole value of real estate
Real estate
In general use, esp. North American, 'real estate' is taken to mean "Property consisting of land and the buildings on it, along with its natural resources such as crops, minerals, or water; immovable property of this nature; an interest vested in this; an item of real property; buildings or...
: the combination of land, buildings, and improvements to the site.

Although the efficiency of a land value tax has been established knowledge since Adam Smith
Adam Smith
Adam Smith was a Scottish social philosopher and a pioneer of political economy. One of the key figures of the Scottish Enlightenment, Smith is the author of The Theory of Moral Sentiments and An Inquiry into the Nature and Causes of the Wealth of Nations...
, it was perhaps most famously promoted by Henry George
Henry George
Henry George was an American writer, politician and political economist, who was the most influential proponent of the land value tax, also known as the "single tax" on land...
.